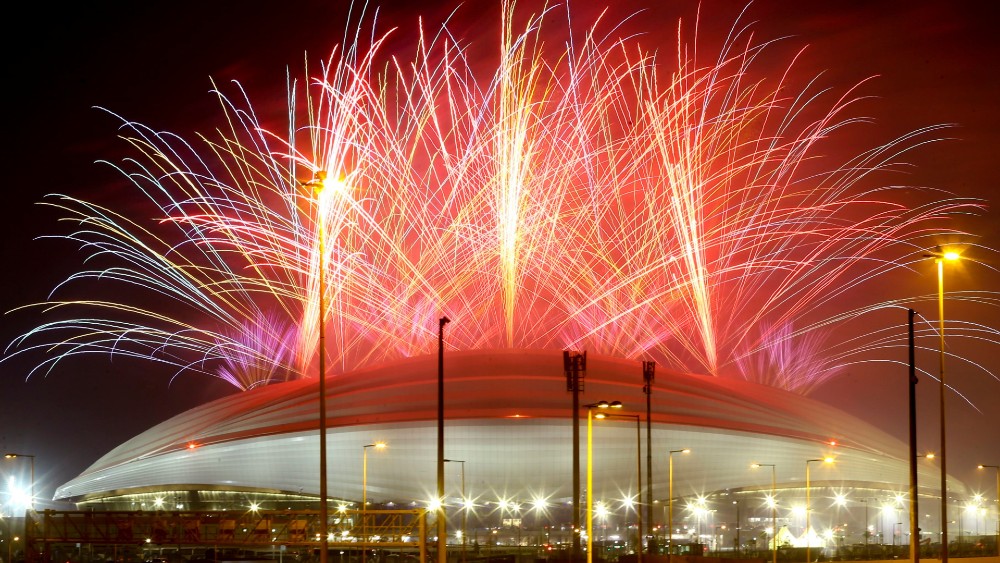 The stadiums for the next men’s soccer World Cup are finally starting to take shape.

Al Wakrah Stadium, one of eight venues where matches will be played during the 2022 Cup in Qatar, hosted its first game, the Amir Cup final between Al-Duhail and Al Sadd, on Thursday, according to Dezeen. Built by Zaha Hadid Architects, the venue is located in the city of Al Wakrah, just ten miles south of the country’s capital, Doha. It is among six stadiums that are being built specifically for the tournament.

“I am certain that in 2022, Al Wakrah Stadium will be one of the most iconic venues at the World Cup, and it gives us all a sense of great pride to be opening the second Qatar 2022 stadium with three and a half years to go,” said Jassim Al Jassim, head of venues operations for the country’s Supreme Committee for Delivery & Legacy.

The gleaming 40,000-capacity stadium features a fully retractable roof that will help cool players and spectators, allowing games to be held year-round, even during the summer when temperatures regularly reach 122 degrees Fahrenheit. Meanwhile, the website reports that the venue’s flowing design is inspired by the dhow, a traditional fishing boat that can be found in the city’s harbor. As visually stunning as Hadid’s design—completed before her death in 2016—may be, it’s also reminded some of the shape of female genitalia, something that greatly annoyed the late architect.

In addition to Al Wakrah Stadium, the new venues being constructed for the tournament include the 80,000-seat Lusail Stadium, designed by British firm Foster + Partners, and the Ras Abu Aboud Stadium, which will be built from shipping containers. Following the Cup, the upper tier of some of the stadiums will be disassembled and donated to countries with less developed sports infrastructure. Once that happens, Al Wakrah’s seating capacity will be 20,000.

While there is excitement over a World Cup finally being held in an Arab state and a Muslim-majority country, the decision to have Qatar host the tournament has not been without controversy. In addition to lesser grumbling over the country’s climate, which is forcing the Cup to be moved from the summer to November and December, there have also been allegations of bribery surrounding the bidding process. The country has also been roundly criticized for its treatment of foreign workers brought in to prepare for the tournament, with Amnesty International alleging widespread abuse and exploitation of the laborers.