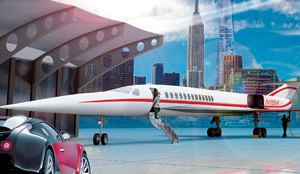 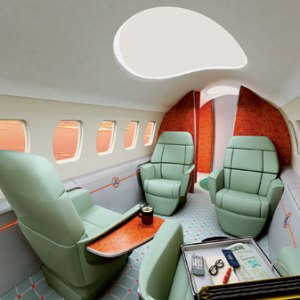 A new supersonic era may be dawning for business flyers. Aerion Corp. of Reno, Nev., says that it expects to begin developing by next year a sleek supersonic business jet that could cruise at Mach 1.6 and zip from New York to Paris in about four hours—more than three hours faster than a Gulfstream V. “The world’s major businesses and governments have a clear need for faster travel,” says Aerion vice chairman Brian Barents, who is a former CEO of business-jet builders Learjet and Galaxy Aerospace. “The Concorde may have been relegated to museums, but the world has not slowed down. Indeed, the reverse is true.”

Aerion’s research suggests that it could sell at least 200 of its supersonic jets during its first 10 years of production. Aerion is now completing its design phase and seeking partnerships with manufacturers to produce the airplane. Deliveries could start as soon as 2011, at a price of about $80 million. Operating costs per mile would be about the same as other top-end business jets, says Barents.

Essential to the jet’s performance is a patented wing technology. Instead of a delta wing, like the Concorde’s, the Aerion jet will have a straight wing that reduces drag and enables the aircraft to slip through the air more easily. “Aerion’s engineers have been at work for many years developing the fundamental technologies to make this possible,” Barents says.

Aerion’s design combines the innovative wing with conventional airframe structures and engines. Assuming Aerion produces the aircraft, two off-the-shelf Pratt and Whitney JT8D-219 turbofans will provide the power. The rest of the systems and structures will be built using standard business-jet construction techniques. The aircraft will have a relatively spacious stand-up cabin that could contain as many as 12 seats but more likely will be configured to carry eight to 10 in comfort.

The company chairman is Texas billionaire Robert Bass, president of the Keystone investment group. Bass says that Aerion has the three hallmarks of a good investment: proprietary technology, a demonstrable market demand, and low technological risk. “There are,” he says, “no evident deal-breakers.”  —mary grady