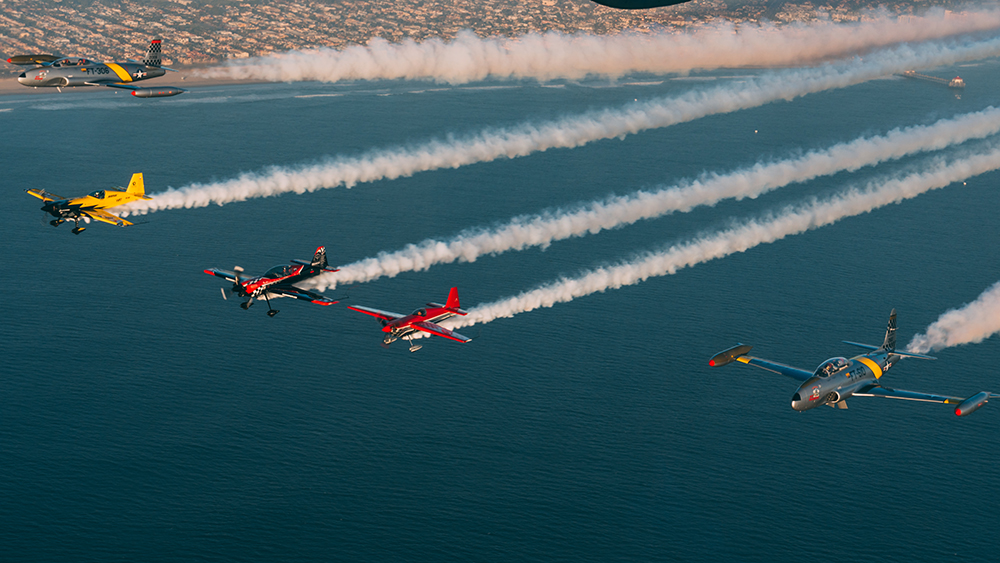 Most adults who attended traditional airshows as a kid remember the heart-lifting, stomach-sinking thrill of watching aircraft soar, roll and tumble across the open sky. Buried below that there are sometimes less-than-savory lowlights—stifling crowds, stadium seating on hot runways and carnival food. None of that deterred Kevin Elliott from starting what is now the country’s largest airshow, though.

The chronic avgeek, who was nicknamed “plane brain” by his mother, flew model airplanes as a child, before venturing down the inevitable rabbit hole of earning his pilot’s license. It was a visit to the then-named Breitling Huntington Beach Airshow in 2017 that inspired him to get into the events biz.

“I had a great time and thought I’d reach out and see if they needed help,” he recalls. “Turns out the guys who created the show were really good at the aviation piece but didn’t know anything about how to produce the boots-on-the-ground event piece.”

What started as a ground project turned into Elliott acquiring the event as a whole and rebranding it as the Pacific Airshow in 2018. “What made it special was that we brought an outsider’s perspective to an old dog’s game, in terms of what air shows have classically been in this country,” he says. Intent on appealing to crowds beyond the typical core aviation audience, Elliott continues to focus on creating a spectator experience that transcends the conventional trappings of past airshows.

“Because it’s on the beach, these folks don’t necessarily know the difference between an F-18 Super Hornet and an F-35, they just know that it’s bitchin’ and they want to hang out and have some drinks,” Elliott adds. “It’s much more of an entertainment venue, kind of like F1.”

To that end, 2021’s two-night music festival drew 15,000 attendees per night. Spectators now have options ranging from $25 general admission tickets on the mile-long viewing area to $300 premier club admission or $5,000 tickets for cabanas with bottle service. The upscaling effect impacts surrounding businesses, too: hotels are sold out, and some are charging $15,000 per night for ocean-facing rooms. So far, the reimagining has paid off: the Pacific Airshow has been the only show to host all three American jet teams—the Blue Angels, Thunderbirds and Snowbirds—and it’s been the only to win the US Air Force’s Civilian Airshow of the Year award twice in a row.

The event drew in roughly 3 million visitors last weekend, helping it lay claim as the most attended airshow in America (EAA AirVenture Oshkosh, the granddaddy of all aviation gatherings, is considered a fly-in convention, not an airshow).

For a preview of this year’s show, we climbed aboard a T-33—aka, Lockheed Shooting Star, so nicknamed “Acemaker” because it is one of the only military aircraft to start life as a fighter jet before switching roles to a trainer. Climbing into a 70-year-old, two-seat jet might sound sketchy, but seated tandem behind pilot Gregory “Wired” Colyer is one of the most reassuring places to be when it comes to vintage aircraft. Colyer has logged 2,000 hours in T-33s—more than any other pilot in history. His prodigious skill level was fortuitous for the task at hand: formation flying over the Huntington Beach Pier amid a swarm of wonderfully diverse slower planes, including a B-25 Mitchell from the Lyon Air Museum, an Extra 330SC piloted by Mike Goulian, a pair of Edge 540s, a jet/prop hybrid-powered Yak 110, a RAD Aerosports jet-powered Waco and another T-33 (one of three owned and operated by Colyer at airshows across the country).

Other aircraft in the skies over the weekend included a US Air Force B-52, a F/A-18 Super Hornet and a four-ship formation of US Air Force T6-As. There was also a spectacular US Air Force Thunderbirds show. Commander and Leader Lieutenant Colonel Justin “Astro” Elliott told Robb Report that of the 69 shows the Thunderbirds put on, the Pacific Airshow is “truly unique” because it’s in a highly populated area in one of the largest cities in the US.

“Performing for a crowd that size really makes us focus on being tight at all points throughout the show,” he explains.

Elliott adds that the fact that the coastline is not straight makes it more challenging to get the aircraft into a straight line (the overlapping wingtips are only 18 inches apart from each other). On top of that, flying over water can alter a pilot’s depth perception. Despite the challenges, the performances were remarkably impactful. It turns out, the extraordinary feats also inspire young plane brains. In fact, the Pacific Airshow is the top airshow recruitment event for the Department of Defense.

What’s more, the show is going international next year. There will be a two-day event held on the Gold Coast of Australia in August 2023. See you Downunder.