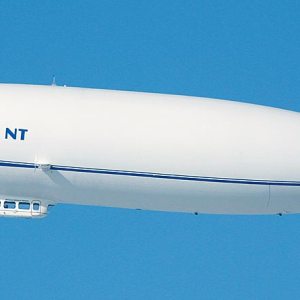 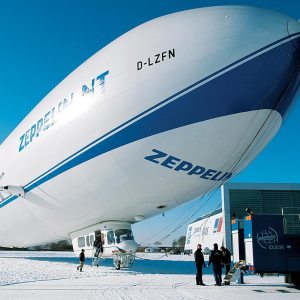 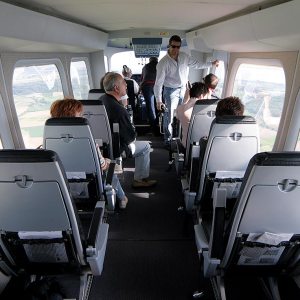 Starting at $17 million, depending on interior details and custom specifications.

Rumor has it that when Led Zeppelin’s front man Robert Plant wrote his best-known lyrics, “Stairway to Heaven,” he had the stairway of the ill-fated Hindenburg in mind. “The German word for it is Himmelstreppe,” says Brian Hall, president of Airship Ventures, the sole zeppelin-charter company in the United States. “And that’s what the Germans actually called it. I guess it really was the stairway to heaven.” The 804-foot Hindenburg was designed to be filled with helium, but due to export restrictions placed on Nazi Germany by the United States, highly flammable hydrogen was used instead. On May 6, 1937, when history’s most famous airship burst into flames while landing in New Jersey after completing a transatlantic flight, the budding zeppelin industry came to an abrupt halt. In recent years, however, interest in dirigibles has been rekindled, and zeppelins stand ready to resume their place as safe, relaxing forms of travel.

While zeppelins from the Hindenburg’s era consisted of multiple internal gasbags surrounded by a metal skeleton and an external fabric skin called an envelope, today’s version is slightly smaller and more lightweight, with a frame made from aluminum and carbon fiber. (A blimp, by contrast, does not have a rigid frame.) Both zeppelins and blimps have gondola cabins on their undersides. A zeppelin’s engines, however, are attached to the airship’s frame and mounted outside the envelope, while a blimp’s are mounted on the gondola. “The zeppelin’s engines are far enough away from the gondola that the cabin is nearly noise- and vibration-free,” says Hall.

Only three zeppelins exist. One (shown above and on the previous page) is owned by the world’s only zeppelin manufacturer, Zeppelin Luftschifftechnik of Germany; one is the property of Japan’s Nippon Airship Corp.; and one recently was delivered to Hall’s Mountain View, Calif., company, which began offering passenger sky tours of the Bay Area this fall. All three are being used for advertising and passenger touring, but Hall’s Airship Ventures, in collaboration with Zeppelin Luftschifftechnik, is offering to build for one Robb Report reader the world’s first individually owned zeppelin. When finished, the 246-foot vessel will have a range of about 500 miles, and its minimum cruising altitude of 1,000 feet will afford unrivaled views for up to 12 passengers—all for a starting price of $17 million.

The zeppelin will arrive with a mast truck for docking, though the buyer will have the option of allowing Airship Ventures to store and maintain the airship at its Moffett Field facility in Mountain View. The gift will include a design of the buyer’s choice on the exterior of the zeppelin’s massive hull, as well as a customized interior. Zeppelin-pilot training and certification also will be part of the package, so that the buyer can enjoy the serenity of an airship flight without having to summon one of the world’s few certified zeppelin pilots.

Pilot and passenger alike can expect a unique experience from this flying machine. “The most incredible feeling is on takeoff,” says Hall. “It feels like you’re in a chair that is being lifted into the sky—your own personal elevator to heaven.”

Delivery will occur 18 to 24 months from purchase date.