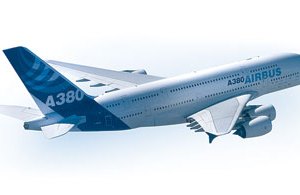 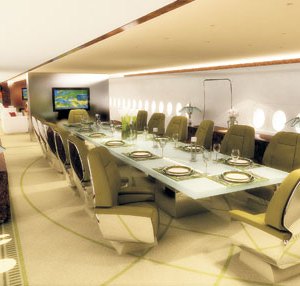 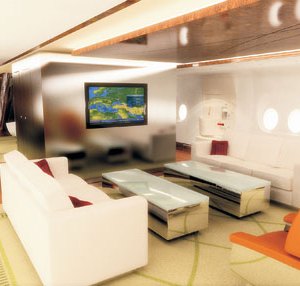 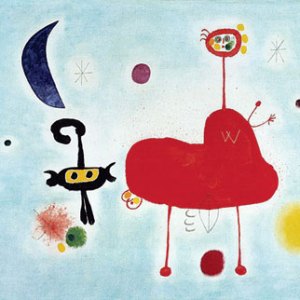 For good reason, the Airbus A380 has been described as the most ambitious aircraft in the history of flight: The double-decker plane, which is expected to begin making commercial flights next year, is designed to carry 555 passengers in a three-class configuration, or more than 800 in an economy-only layout. The A380’s staggering capacity places it well ahead of the Boeing 747 for the title of the world’s largest passenger aircraft, and its range, which exceeds 9,000 miles, suits it to long-haul flights such as those that travel from Los Angeles to Sydney. Airbus has accepted almost 150 orders for the plane, from Virgin Atlantic, Lufthansa, Singapore Airlines, Qantas, and a dozen other airlines.

Given the A380’s extra-large proportions, the possibilities for reconfiguring the aircraft for private use are unprecedented. Edése Doret Industrial Design, a seven-year-old Manhattan firm that has created more than 30 interiors for Boeing Business Jets, Gulfstreams, and other business jets, received one of the earliest known commissions for an Airbus A380 interior when a Middle Eastern client asked the company to develop one in 2001. (It was actually a double commission; the same client also asked the firm to design the interior of his 220-foot yacht. However, he canceled both projects when it became clear that there would be a second Gulf War.) Edése Doret, which is named after its founder and president, received a second Airbus A380 commission in 2004 but is awaiting the client’s decision to proceed. Both projects were what the Doret firm calls “VVIP interiors,” extremely opulent cabins intended for very, very important people.

Because of Edése Doret’s experience with the A380, Robb Report invited the firm to create a superjumbo jet interior for the Ultimate Gift Guide. The 38-year-old Doret certainly has a spacious canvas on which to create. “It’s literally like having two A340s on top of each other. It’s like working on two planes at the same time,” he says.

Despite the A380’s hefty price, Doret is convinced that a market exists for personal superjumbo jets. “I think everyone’s waiting to see who will go first,” he says. “After that, everyone will want one.”

The Airbus A380 interior Doret proposes will seat 80 and sleep 80, albeit uncomfortably. However, his definition of uncomfortably means that some of the 80 would sleep in the equivalent of a commercial airliner’s first-class seat. From 20 to 22 people could sleep comfortably, by his estimation, in beds and convertible divans.

The plane will feature an Air Force One–style entrance, a set of stairs that descends from the belly to the tarmac.

The main deck will include an entry lounge, a grand lounge, a dining area that seats 14, a galley, and staff seating. The grand stairway, located in the entry lounge, will lead to the upper deck’s office, game room, art gallery, guest suite, galley, dining area, and stateroom with a king-size bed and an adjoining master lavatory with a large Jacuzzi tub.

The Jacuzzi, which will seat two and be equipped with a 42-inch plasma screen, will be the first that Doret has designed for a plane. He intends to treat it like a shower, enclosing it within sliding glass doors. “If the plane goes into a steep dive, the tub would automatically drain,” the designer says. “In case of turbulence, the pilot would warn whoever is in the tub to exit.” The bathers could then strap themselves into a nearby bench seat equipped with pull-out restraints.

Renowned Montreal gallery Landau Fine Art will assist in the selection of artworks to fill the A380’s gallery.

Starting at $363 million, not including the artworks.

The plane and its interior will take at least 24 months to complete.