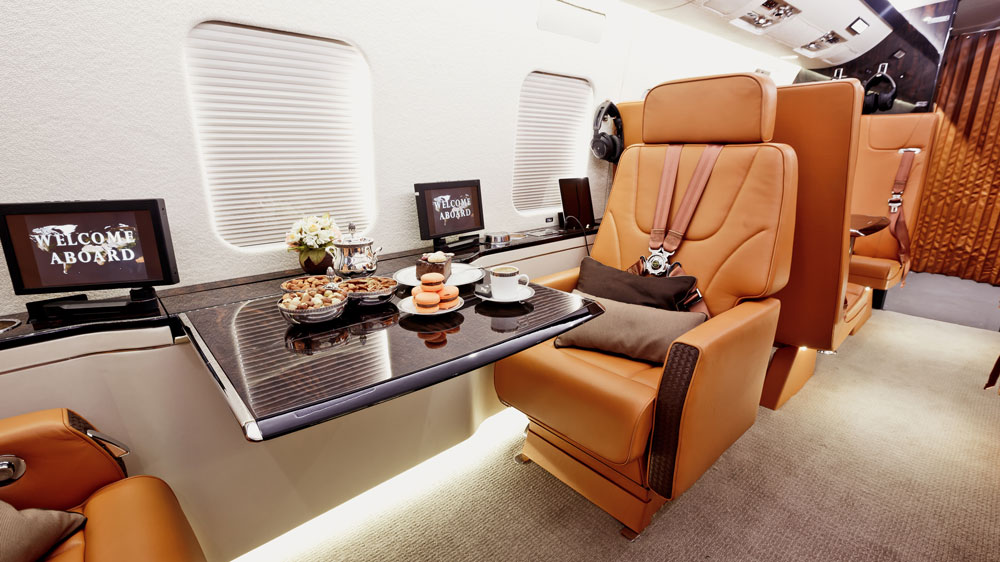 Somewhere between flying first-class on an airliner and chartering an entire business jet lies the single-seat charter market. There, you can purchase a seat on a private aircraft that flies a set route at set times or is available for an unscheduled flight. (The latter often includes empty-leg flights on planes going from your location to your destination.) These flights can be available through companies’ membership programs—which may require a monthly or annual fee—or pre- purchasing programs or on a pay-as-you-fly basis. Many of the companies offer phone apps that simplify the booking process.

The appeal of these flights is the savings in price and time. Because you’re sharing the cost of the flight, it’s a fraction of the price of chartering an entire aircraft. And whether it’s an unscheduled or scheduled flight, it’s usually going to be more efficient and more convenient than flying first-class on an airliner. The aircraft use FBOs, or private hangars, so passengers avoid security and baggage-check lines and are typically allowed to arrive only 15 minutes or so before takeoff.

“It’s extremely cost-effective,” says Anthony Tivnan, president and co­founder of Magellan Jets, a jet-card and on-demand charter company that does not operate in the single-seat market. “Half my friends have memberships [with one of the single-seat companies], and they call me and say, ‘Oh, I feel guilty. I feel like I’m cheating on you.’ It’s a good solution for folks who aren’t looking for what we provide with private aviation. It’s a completely different experience, a different model.”

Colby McDowell, managing dir­ector of acquisition at the business-aviation consulting firm VanAllen, shares Tivnan’s observation that single-seat charters target a clientele that’s different from the one chartering entire aircraft or purchasing flight cards. “If you’re looking to replace first-class airline travel, I’d say it’s a very comfortable transition because you’re basically trading a public convenience for a more private convenience. But if you’re trying to replace a fully private charter with a charter seat to save money, then it’s going to be a compromise that you’ll have to be very deliberate about.”

While mulling over the choice to book an individual seat the next time you fly, these are the types of questions you may want to ask.

Though the legality of selling individual seats on scheduled and unscheduled charter flights has been questioned, the Federal Aviation Administration (FAA) allows the practice, provided the parties involved have the proper certifications from the FAA and the Department of Transportation. Still, the issue remains murky, even for industry insiders. In its “Guide to Selling Charter by the Seat,” the National Business Aviation Association notes to prospective and individual-seat providers that “when selling or brokering per-seat transportation, sales brokers and carriers must navigate their way through DOT and FAA regulations that are not always clear or consistent. Until such time as the DOT and FAA provide more detailed guidance in this area, heightened caution is essential.”

One thing is clear: The planes must operate under the FAA’s Part 135, the safety regulations governing charter aircraft. In January, the Supreme Court rejected without comment an appeal concerning the FAA’s 2014 shutdown of two Internet companies that arranged paid flight-sharing on aircraft that operated under Part 91—the more lenient rules governing smaller aircraft that are not certified to carry charter passengers.

Most of the companies offering individual seats on unscheduled flights are charter brokers. Some buy all the seats on an empty-leg flight and then sell them individually. This is legal if the broker complies with the various FAA and DOT regulations.

Who is the operator?

As noted, the company selling the ticket is not necessarily the company operating the aircraft.

“Some of these considerations are just like the ones you would have with a traditional charter,” says McDowell. “What are the operator’s credentials? What’s its background? How is it rated by Wyvern or Argus [aviation consulting firms that provide charter-operator ratings]? Has it gone through some kind of audit or standardization process?”

Is your seat guaranteed once you book it?

This may depend on the relationship between the company that sells the seat and the one operating the aircraft—if they are two separate entities, says McDowell. “I think a lot of operators are going to be trying to play both sides against the middle,” he says. “They’re going to work with a broker who’s trying to fill the airplane on a per-seat basis, but until they are paid, they’re going to continue to market that airplane to other charter operators and other charter brokers. And whoever has the money in first wins.”

McDowell suggests that you find out ahead of time whether the flight would be canceled if the broker doesn’t sell enough seats and whether your deposit  will be returned.

Where will you be sitting?

If you’re booking a spot on an aircraft with a club-seating configuration, find out whether you have an assigned seat, especially if you’re averse to facing backward when flying. “Some people are very uncomfortable riding backward, and yet fully a third of the seats may be facing the rear of the aircraft,” says McDowell. He says that the couch, or divan, could also be a problem, because some people find these side-facing seats uncomfortable, especially when you try to squeeze three people onto one. “You’d be hip-to-hip, elbow-to-elbow,” he says. “It would be very tight, and it would be difficult to use the flight time for work, which is part of the reason for traveling on a private plane.”

What plane are you flying?

Most of the fixed-route charter operators fly just one type of plane. But if it’s an unscheduled flight, will you know the specific type of plane you’re going to fly on before you purchase the seat? Or will the plane be determined by the size of the group that’s flying? Robb Report Private Aviation Advisory board member Lee Rohde III, CEO, founder, and president of the Essex Aviation Group consulting firm, says he prefers to have even more information about the aircraft. “When we charter a plane for a client, we get the tail number,” he says. “That way, you know whether the plane is 5 years old or 25.”

Will the plane depart and arrive on time?

For regularly scheduled flights on set routes, the answer, of course, should be yes. But Rohde wonders if one or two stops could be added to an unscheduled flight to accommodate the travel plans of passengers whose ticket purchases helped fill the plane. Such additional travel time might defeat your purpose for booking a seat, he says. “The financial incentive to fly privately is that you leave on time and get where you want to go when you want to get there.”

Rohde would also like to know if passengers could encounter the same issues that fractional owners face during peak flying days, when there can be as much as a 3-hour window before and after the scheduled takeoff and arrival times. “If there’s a time frame for the takeoff, you want to be aware of it,” he says. “The main reason for flying the charter is to save time, so what kind of guarantee do you have that you’re going to reach your destination on time?”

Because the passengers will arrive at the FBO individually and from different locations, McDowell notes the possibility of some being later than others, so he would ask how long the pilot is obligated to wait for tardy travelers.

Who are you flying with?

A great appeal of flying privately is that it’s, well, private. You don’t have to share cabin space with anyone you don’t know—and maybe don’t want to get to know. “Will you be okay with the people who are getting on the plane?” asks Rohde. As McDowell notes, you don’t have to ask that question when you’re chartering the entire aircraft. “One of the huge value propositions for traditional charter and private aviation is that it’s just you and whoever else you invite on the airplane,” he says.

By purchasing a single seat, you could also sacrifice the snob appeal of flying privately. “[Single-seat purchasing] is almost creating a new vertical within the charter market,” says McDowell. “What I mean by that is it’s probably targeting a class of customers who would not traditionally have access to private aviation based on its price point.”

More significant for the travelers whom companies such as Magellan Jets targets, says Tivnan, is the sacrifice of privacy. “Our passengers want the privacy. That’s what they’re signing up for,” he says. “Our corporate members need that privacy. There is no way they’re going to put their board members on a plane with a bunch of people they don’t even know. It’s just not going to happen. It’s great if you’re with friends and you know everyone, but if the plane is packed with eight people, and you don’t know anybody on the flight. . . .

“People ask me, ‘Why don’t you do a ride-sharing service?’ ” Tivnan adds. “Our average passenger load per flight is 2.3 people, and we fly everything from Gulfstream G450s [the G450 typically seats 14] to Challenger 300s [typically seats eight]. Even the Hawker 400XP that we fly seats seven. So our clients are paying for the privacy.”