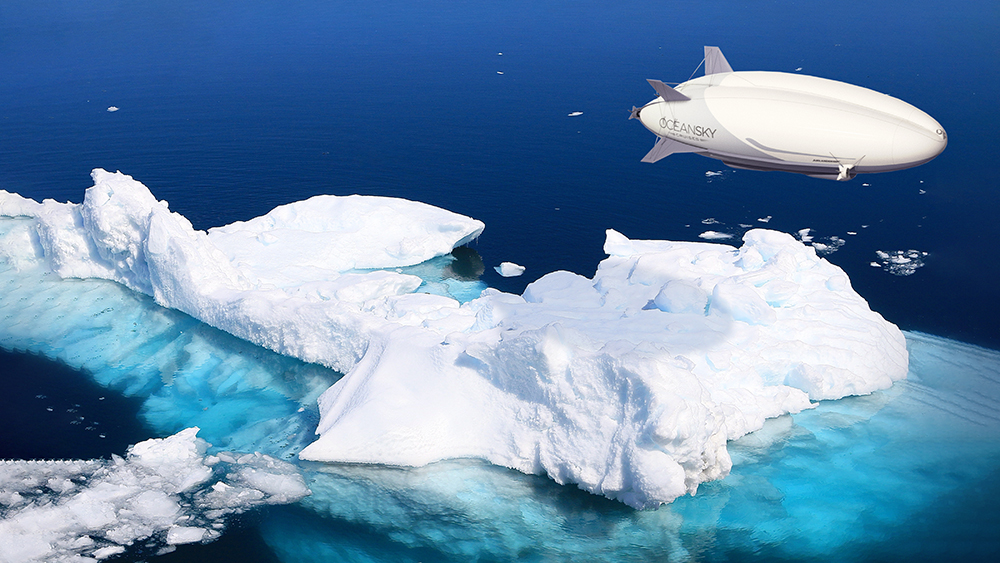 In a new future-meets-the-past venture, Swedish company OceanSky Cruises is bringing airship journeys into the 21st century with a 36-hour route from the Norwegian archipelago of Svalbard to
the North Pole.

The Airlander 10 is the largest flying vehicle on the planet both in length (about 300 feet) and volume (1.3 million cubic feet). And it’s five times the size of the Goodyear blimp. It’s been nearly a century since something of its kind has flown commercially, and founder and CEO Carl-Oscar Lawaczeck says the diesel-and electric-powered airship is being outfitted like an ocean liner in the sky, with eight en suite staterooms, a lounge and bar and fine dining on board. Viewing areas will be equipped with panoramic windows and transparent floors, ideal for gazing at the Northern Lights or for low-altitude whale watching.

OceanSky is the result of one man’s obsession with dirigibles. Lawaczeck says his interest in unconventional aircraft began from “a logistical, economic and aviation point of view,” emphasizing that airships achieve flexibility in takeoffs and landings that fixed-wing aircraft simply can’t deliver. “They solve a huge problem,” he explains, “and are a last-mile solution to bring passengers and cargo to places where there’s no infrastructure.” He also points out that unlike helicopters, which are often used for the same purpose, airships consume a fraction of the fuel and offer considerably more range. He estimates that the Airlander will use about 17 percent of the energy a powerful jet does, making carbon emissions a whopping 83 percent lower.

With lower power requirements, however, speed gets sacrificed. But Lawaczeck sees that as part of the pleasure of flying in such a craft. “We calculate a low cruising speed of 50 knots,” he says. “We fly low and slow to enjoy the journey.”

For the Airlander’s leisurely maiden voyage to the North Pole (a jet could make the round trip in just 1.5 hours, in comparison), OceanSky promises an expedition led by Robert Swan, the first person to reach the North and South Poles by foot. The airship’s first commercial flight is planned for 2023 or 2024. The company is accepting 5 percent deposits on the total ticket price of $94,000, which are placed in a state-sponsored escrow account and can be fully refunded if the endeavor quite literally doesn’t take off.