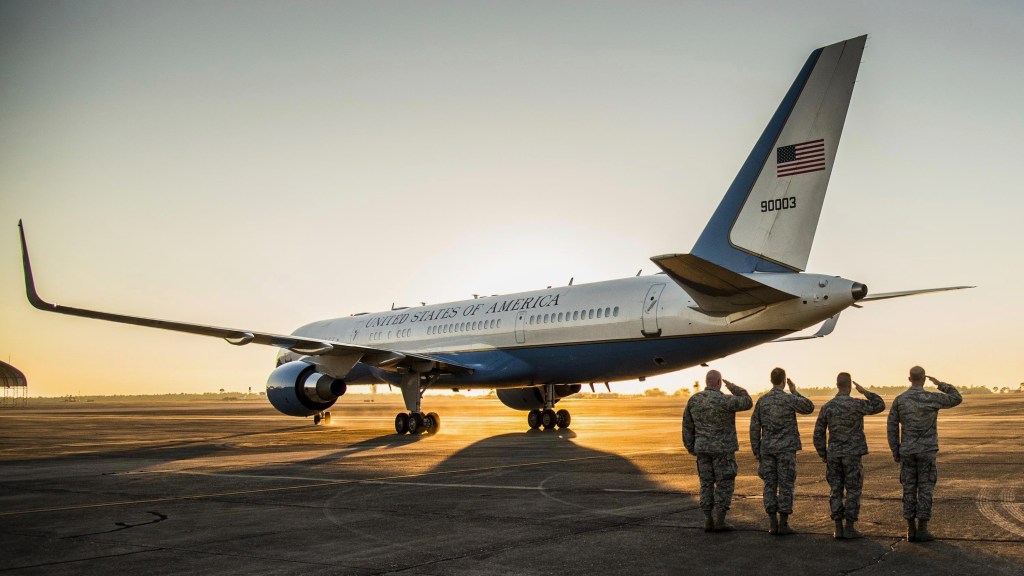 The two Boeing VC-25 aircraft that most frequently serve as Air Force One are surprisingly expensive to refit, and in the opinion of the current president, prohibitively expensive to replace. In January, Air Force One was in the news because of the $24 million cost of replacing two on-board refrigerators. But that price was dwarfed by the one Donald Trump cited in a December 2016 tweet opposing the order of two new 747-8 aircraft for the presidential fleet: “Boeing is building a brand-new 747 Air Force One for future presidents, but costs are out of control, more than $4 billion. Cancel order!”

The tweet was not entirely accurate. The build order had not yet been approved; Boeing was contracted $170 million to design (not build) the aircraft; and the Air Force planned to spend $2.8 billion over the course of five years for the two (not one) planes.

Nevertheless, the order was scrapped and instead the VC-25s will be replaced by a pair of 747-8s that Boeing has stored in the Mojave Desert. The planes were built for but never delivered to Transaero, a now-bankrupt Russian airline. Of course, they will have to be completely retrofitted with new interiors and the necessary security and telecommunications equipment before they enter Air Force One service.

The anticipated arrival of these new aircraft, along with the celebration of Presidents’ Day, led us to ask—and find the answers to—some questions about the present and past planes of POTUS.

Why are the Air Force One aircraft being replaced?

They are old and thus inefficient compared to new aircraft. They were ordered during the Reagan administration and have been in service since the start of George H.W. Bush’s administration. Despite their age, however, the aircraft are still very capable. They have a cruising speed of 557 mph and a high speed of at least 600 mph—some sources say they can reach 700 mph. Their range is 7,800 miles, but they can refuel while in the air.

Each aircraft has 4,000 square feet of space spread over three floors. Each can accommodate 70 passengers—including White House staff and the press corps—and 26 crew members. Among the amenities are private quarters for the president and first lady that includes an office, bedroom, bathroom, and gym; an office area for senior staff, a medical operating room (a doctor is always on board); and two galleys that together can prepare meals for 100 passengers.

How many aircraft serve as Air Force One?

Thus, the Gulfstream III in which Bill Clinton flew while in Turkey in 1999 was designated as Air Force One during those flights, as was a Beechcraft King Air B90 when it flew Lyndon Johnson between an Air Force base in Texas and his ranch.

However, when the Boeing 707 that had served as Air Force One flew Richard Nixon home to California after he announced that he was going to resign, it changed its call sign to SAM (Special Air Mission) 2700 mid-flight when Gerald Ford was sworn into office.

When was the “Air Force One” designation first used and why?

The call sign was established in 1953, during the Eisenhower administration and following an incident in which an Eastern Airlines commercial airliner accidentally entered the same air space as the president’s Lockhead Constellation. The airliner was flight 8610, and the president’s plane was flying under the call sign Air Force 8610.

Have any foreign heads of state flown on Air Force One?

Leonid Brezhnev (in 1973), Queen Elizabeth II (1983), and David Cameron (2012) are among the world leaders who have accompanied presidents on Air Force One flights. Cameron flew with Barack Obama from Washington, D.C., to Dayton, Ohio, to watch a March Madness basketball game.

Is the president’s Boeing VC-25 equipped with an escape pod?

Contrary to what’s depicted in the films Air Force One and Escape from New York, the president’s plane does not have an escape pod. However, its onboard electronics are designed to withstand the electromagnetic pulse created by a nuclear explosion. The aircraft also can jam enemy radar and launch flares that will disable enemy missiles.

Who was the first president to fly?

Theodore Roosevelt flew on a Wright brothers plane in 1910, but that was after he had been succeeded in office by William Taft. The first sitting president to fly was Franklin Roosevelt. His first recorded flight was in 1943, when he traveled aboard a Pan Am Boeing 314 to the Casablanca Conference in Morocco. From 1933 to 1939, the U.S. Navy operated a Douglas Dolphin that had been acquired for presidential travel, but there is no record that Roosevelt ever flew aboard it.

Dwight Eisenhower became the first sitting president to experience jet travel. In December 1959, on a goodwill tour at the end of his second term, he flew aboard an Air Force–operated Boeing 707 to 11 Asian countries in 19 days.

Who designed the Air Force One livery?

It was designed by the French-born American industrial designer Raymond Loewy, in 1962, after the Kennedy administration took delivery of a Boeing 707 with a red-and-metallic-gold livery. On the advice of First Lady Jacqueline Kennedy, the president enlisted Loewy to redesign the exterior as well as the interior. Loewy, whose work ranges from streamline locomotives to the Coca-Cola bottle to NASA’s Skylab, came up with the color scheme that is still used today: cyan, slate-blue, white, and polished aluminum. Adorning the sides of the plane with the presidential seal and “United States of America” in all-capital lettering was also Loewy’s idea.

Who was the last president to fly commercial while in office?

In December 1973, during the oil crisis and as evidence about the Watergate scandal mounted, Richard Nixon and his family made a surprise trip aboard a United Airlines DC-10 from Washington, D.C., to Los Angeles. Nixon, who during a nationally televised press conference a month earlier had declared “I am not a crook,” reportedly chatted comfortably with fellow passengers during the flight. His staff said the president flew commercial to set an example for the rest of the country by conserving the fuel that otherwise would have been used to fill the Air Force One Boeing 707. While the president was on board, the aircraft had the call sign “Executive One.”

What will those $24 million refrigerators keep cold?

For security purposes, any food prepared and/or served on Air Force One while the aircraft is overseas is procured prior to the trip in the United States. So, there has to be plenty of room in the fridges for perishables. During the George H.W. Bush administration, the perishables reportedly never included broccoli. His dislike for the vegetable prompted him to ban it from Air Force One as well as the White House.

Legend has it that during the Ford administration, the Air Force One refrigerators were used to keep Coors beer chilled. Back then, Coors wasn’t available east of the Mississippi River, so when Air Force One flew to Colorado or one of the other 10 western states where Coors was sold, the staff would usually pick up a few cases to bring back to the White House. At the time, Coors supposedly had to be kept cold to prevent it from spoiling, so if the staff did make a beer run before returning to D.C., they would have stored the Coors in the aircraft’s fridges.