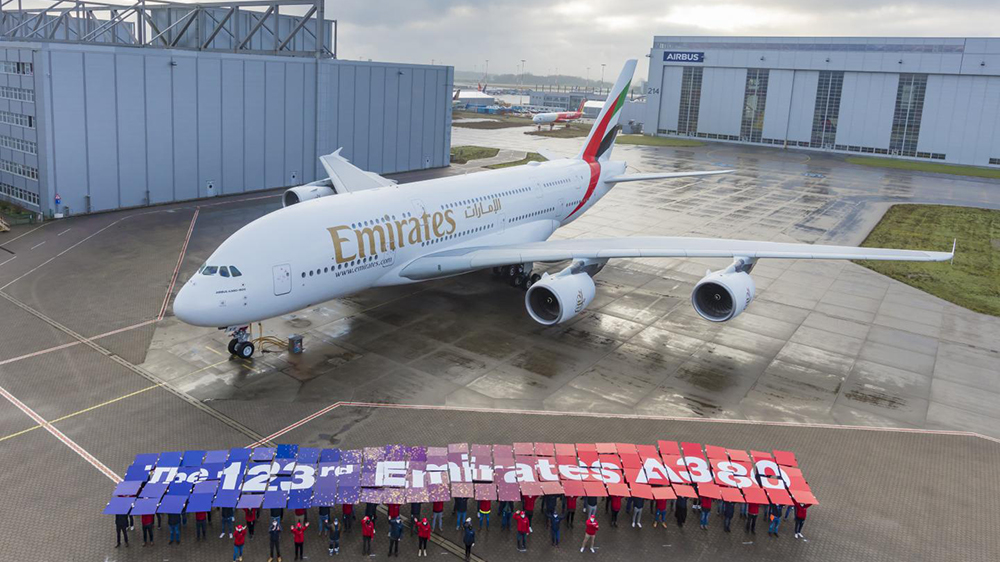 The final Airbus A380 is up and out the door.

The airline manufacturer delivered the last of its double-decker superjumbo jets to Emirates on Tuesday, according to a press release from the company. The handoff, which took place in Hamburg, Germany, puts an end to a 15-year production run for the gigantic airplane.

The A380—which was announced in 1990 and made its debut nearly two decades later, in 2007—was Airbus’s attempt to knock the Boeing 747 off its perch. It didn’t accomplish this goal, but that doesn’t make the aircraft any less impressive. The plane has two full decks and typically seats 525 passengers, but can hold a maximum of 868 (the newest 747 version can hold just 467), making it the largest commercial plane ever built. It also has a maximum flying range, in its standard configuration, of 8,000 nautical miles (9,200 miles).

Inside one of Emirates’s Airbus A380s  Airbus

Airbus has built a total of 251 A380s over the last decade and a half, 123 of which were purchased by Emirates. Despite costing $500 million each, the Dubai-based carrier made the superjumbo jet the flagship of its fleet, according to CNET Roadshow. The airline made sure that flying aboard the A380 was a special experience, equipping each of the planes with opulent features like premium class lounges, showers and sleeper-style suites. The plane helped Emirates build a reputation as one of the world’s finest airlines.

“Emirates has built its growth and success with the A380,” Bertrand George, head of the A380 program for Airbus, said in a statement. “Each new A380 is an opportunity for Emirates to offer passengers a new experience in terms of cabin comfort and choice of destination, taking full advantage of the business model offered by the A380.”

The 15 years the A380 spent in production may sound like a lot, but it’s actually quite short compared to other major aircrafts. For comparison, Boeing has been building the 747 for over 50 years. Still, although no more A380s will be built, the plane won’t be disappearing from the sky any time soon.