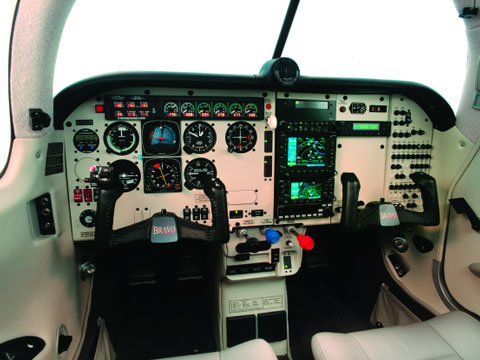 While cruising over the Bay Area at 22,000 feet, I key the mike button on the Bravo2, Mooney Airplane Co.’s new four-seater, and check on the conditions over Oakland, Calif. “Center, Mooney One Sierra Bravo. Do you have a ground speed?”

“Mitsubishi One Sierra Bravo, Oakland Center,” comes the response. “Reading 270 knots, plus or minus 10.”

I correct the controller, though his mistake is understandable. As it moves across a radar screen, the Bravo2, the fastest single-engine production plane available, does indeed resemble the 300-mph turboprop Mitsubishi.

On a day like today, when I want to put in some valuable face-to-face time with my clients and still be home for a late dinner, such speed comes in handy. That morning, I had flown from my hometown of Santa Monica to Oakland in two hours, arriving half an hour early for my first meeting of the day. From Oakland, I flew north for another hour to Chico for my second meeting. Now, a 50-mph tailwind is making my flight home even shorter than expected. Perhaps that dinner will not be late after all.

The Bravo2, like the Mooney Eagle2 and Ovation2, is a handmade plane that features a forward-sweeping tail and a long, distinctive wing, giving the aircraft a muscular appearance. Mooney, launched in 1946 in Wichita, Kan., moved in 1953 to its current facility in Kerrville, Texas, where the company has been building high- performance single-engine aircraft for 50 years.

The Bravo2 has an intercooled 540-inch engine, powered by a Lycoming turbocharger, that effortlessly lifts the plane above spotty weather to 22,000 feet, where the aircraft cruises at 250 mph. The Bendix/King KFC 225 autopilot flight control system executes perfect level-offs, automatically trimming the aircraft to its maximum speed.

Even at 10,000 feet, the Bravo2 cruises at 220 mph, a speed associated with twin-engine aircraft and the fiercest four-wheeled machines from Maranello. But just try driving from Santa Monica to Oakland, then to Chico, and finally home—1,500 miles and two business meetings in one day. That is a trip you would not want to make even in a Maybach. The Bravo2, however, which holds altitude and heading as though it were on rails, and features six-way adjustable leather seats and lightweight, noise-reducing Bose headsets, makes the three-hour flight as pleasant as a drive in the country.

“Owning an aircraft improves your quality of life,” said the late Roy LoPresti, the chief engineer who designed Mooneys in the 1970s. “Pilots always know that the sun is shining above.” The thought of sleeping in my own bed that night makes the day seem even sunnier.