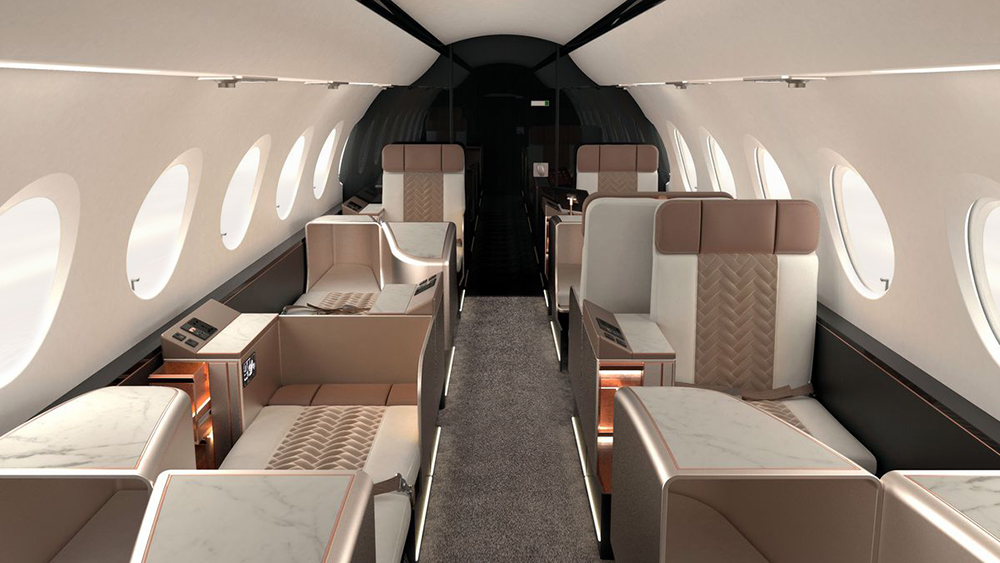 Airgo Design wants to revolutionize the sleeping experience on midsize and super-midsize business jets. Those two classes—transcontinental commuters with ranges between 3,000 and 4,100 nautical miles—typically have 6 to 10 seats, though usually only a few will convert to beds. “Space efficiency on private jets often doesn’t get the attention it deserves,” says Alireza Yaghoubi, AirGo’s cofounder and chief technology officer. “The seats are bulky, and floor space is used almost wastefully. Our Supernova seating makes better use of the space, so all seats convert to beds.”

Each seat is also transformed into a personal zone, with a divider, in-flight entertainment, power outlets, tray tables, even its own drink cooler. While the company’s target list for the Supernova treatment includes the Challenger 350, Falcon 2000S, Praetor 500 and Citation Longitude, its initial work is being done for the popular Gulfstream G280, which has set 75 speed records and has a range of 3,600 nautical miles. The G280’s standard configuration includes 8, 9 or 10 seats, but with only four sleepers in the center area.

With the Supernova configuration, all eight seats convert to beds. The layout is slightly asymmetric, with back-to-back seats in the center overlapping to create six-foot-long “individual living zones,” as Yaghoubi calls them, preserving the G280’s design features while sacrificing just one inch of aisle width.

Each seat can transform into a bed and a personal zone.  Airgo Design

Beyond space considerations, AirGo’s short-fiber thermoplastic composite seating reduces weight by half compared to traditional aluminum alloy. Yaghoubi believes Supernova could transform many of these mid-range aircraft from day commuters into overnight sleepers, while enticing more family and friends to go along for the ride.

The Supernova configuration could also be fitted on long-range jets like the Global 5000 and Gulfstream G600, and AirGo has already configured a 14-seat layout for the Global Express XRS, an ultra-long-range aircraft capable of 7,077 miles—perfect for an extended family getaway to Tahiti or Bora Bora.

Check out more images below: