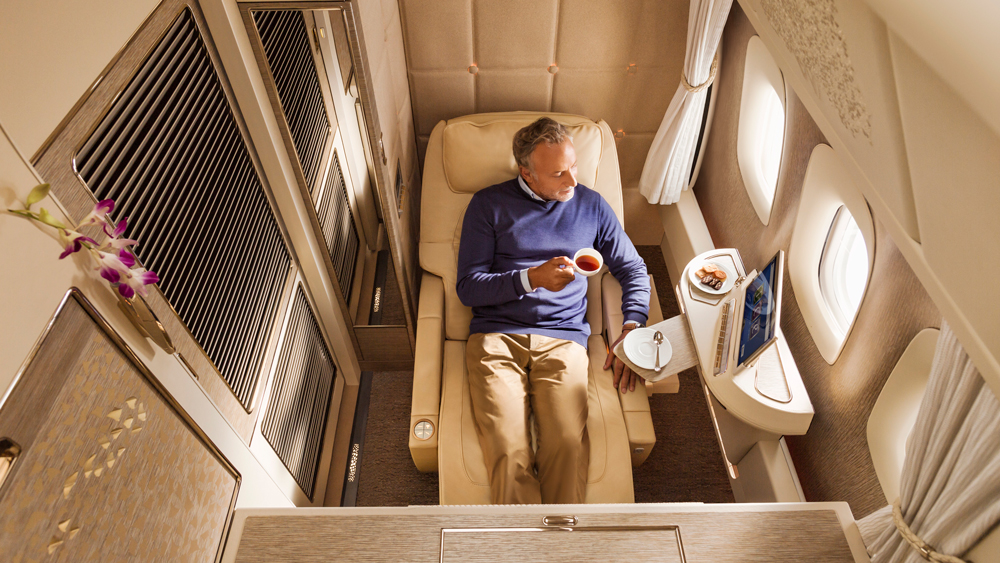 Have you noticed that first-class cabins are shrinking, and in some cases have disappeared entirely?

If you’re flying a domestic airline, you’ll be hard-pressed to book a first- class seat on Delta, which eliminated international first class, or United, which is phasing out its first-class cabins on international travel. American Airlines announced it will soon offer first class on only 20 of its Boeing 777-300ERs that y to major financial centers, including London and Hong Kong.

Cathay Pacific, British Airways, and Lufthansa are all reducing their proportion of first-class seats as they refresh their fleets with new Boeing 787 Dreamliners and Airbus A350s. Qatar Airways, often touted as the world’s most luxurious airline, is limiting first class to the eight-seat cabin on its 10 A380s.

Even mighty Emirates, the world’s largest international long-haul carrier (by passenger miles own), is reducing first-class seats on numerous carriers and eliminating the first-class cabins entirely on 30 of its 777s and 15 of its A380s.

What’s behind the downshift? Money. The economics of first class are ruinous to both the airlines and passengers. Each seat costs between $150,000 and $300,000 to develop and build, and caviar and Krug aren’t cheap. Despite the hefty ticket prices ($1,000 an hour, on average—up to 70 percent more than business-class seats), carriers say they barely break even.

Added to the economics, corporations are much more aware of perception, and many companies that used to y their top executives first class have decided business class or economy is just fine. Shareholders won’t support such extravagance.

Wealthy leisure travelers are comparing new and improved business-cabin features—at beds, direct aisle access, dining on demand, private-style suites—with first class and concluding that the higher fee isn’t worth it. Improved business
class, in some cases, is contributing to the demise of first class.

Some airline bosses agree. Akbar Al Baker, group chief executive of Qatar Airways, says the airline’s new business-class Q Suite is better than first on many carriers. “After traveling in the Q Suite, do you really need to pay to fly first class?”

Only two airlines claim to make money in first and are raising their game (while discreetly cutting cabin size). Tim Clark, president of Emirates, just introduced private first-class suites that measure 40 square feet with floor-to-ceiling walls and sliding doors. They will soon be available on routes to most major financial centers where “demand remains very strong,” he says. “We have a very loyal customer base and we need to keep them interested in what we are doing. We will not eliminate first class on my watch.”

Singapore Airlines moved the Suites cabin from the lower deck to the upper on five of its A380s; at 50 square feet, those suites are the largest in the sky (the Residence notwithstanding). There are now only six of them in the cabin, half as many as in its previous incarnation, and four can be converted into vast double suites with a double bed. “It’s about right-sizing the cabin for the times,” says Yung Han Ng, Singapore Airlines’ vice president of product innovation.

Remember how you felt when you missed your chance to fly the Concorde before it disappeared from flight schedules? First class will likely continue to get harder to find, and it too may soon disappear altogether. Grab it while you can.