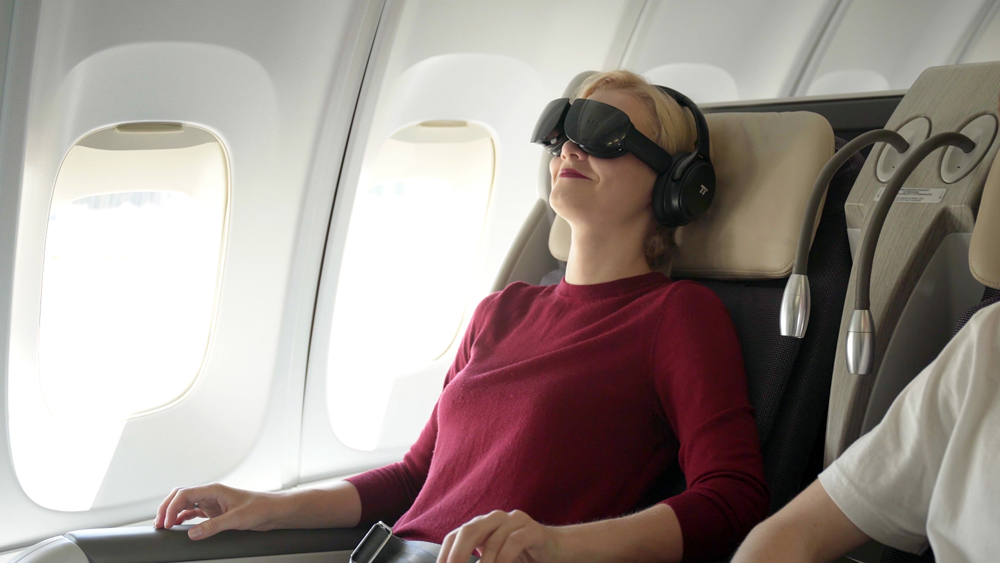 Let’s be honest: Aside from takeoff and landing, the majority of a flight—particularly on a commercial flight—is an exercise in trying to keep your brain occupied, or for you aerophobes out there, distracted from the thought of impending fiery doom. In-flight entertainment options have improved dramatically over the years, but you’re still very much conscious that you’re watching a tiny screen in an environment filled with small visual and auditory distractions.

This is where virtual reality (VR) comes in. It promises a truly immersive escape from the mundanity of long-haul flights. One of the leaders in this nascent category is SkyLights, a French-American company that has developed VR glasses that have already been used by Emirates, Etihad, and Air France, among other international carriers. However, the company recently announced that Alaska Airlines would become the first commercial airline to offer SkyLights’ Allosky Cinematic VR technology on flights in North America.

While most people may think games when they hear VR, but the main purpose of the Alloskys is to provide a more immersive cinematic experience—though games could factor into its offerings more down the road. Even the small lenses on the glasses can look like an IMAX when they’re right in front of your eyes. And since each lens projects its picture in 1080p resolution, you get a full HD experience.

The glasses can display your run-of-the-mill 2D movies as well as 3D movies, but one feature that seems like it has great potential is its “forward-facing 360-degree” films (which sounds a lot like around 180 degrees to us). In these films, passengers will be able to move their heads and freely look around their virtual environment. Subject matter ranges from sports to musical performances to news, but we’re particularly drawn to the idea of nature or travel content. Who wouldn’t want to spend their flight virtually relaxing on a beach or taking in the majesty of the Grand Canyon? If your anxiety is still soaring, you can even take virtual guided meditations.

Initially, the VR glasses will only be available to first-class passengers on the carrier’s Seattle–Boston and Boston–San Diego routes. If it really takes off (apologies) it could be expanded to more routes, and other airlines might jump on the bandwagon.