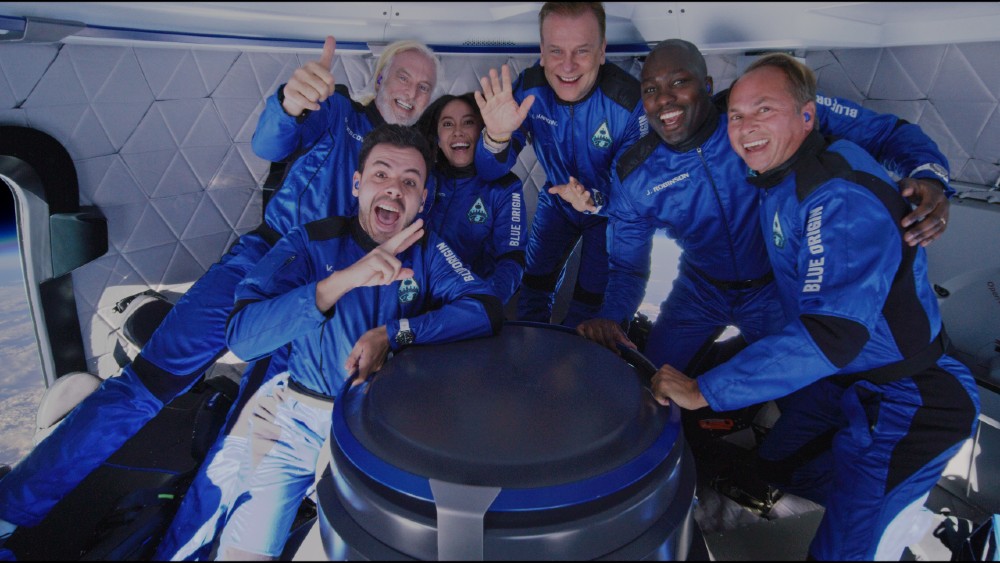 Blue Origin’s fifth group of space tourists successfully took off and landed on Saturday with arguably the most diverse crew that has gone into space. The New Shepard vehicle lifted off from Launch Site One, Blue Origin’s facility in west Texas, at 9:25 EDT, and then touched down about 10 minutes later. The capsule reached a peak of 347,538 feet, or 106 kilometers, above ground level, before parachuting into the nearby desert. The Karman Line, which scientists generally agree is the dividing line between Earth’s atmosphere and space, is about 100 kilometers above the planet.

The six-person crew included Katya Echazarreta, 26, an engineer and science communicator originally from Guadalajara, Mexico, who was the youngest person on the mission and the first Mexican-born woman to travel to space.

“Looking down and seeing how everyone is down there, all of our past, all of our mistakes, all of our obstacles, everything—everything is there,” she told CNN Business. “And the only thing I could think of when I came back down was that I need people to see this. I need Latinas to see this. And I think that it just completely reinforced my mission to continue getting primarily women and people of color up to space and doing whatever it is they want to do.”

Back to Earth. The crew celebrate touchdown after a 10-minute voyage beyond the Karman Line.  Courtesy Blue Origin

While the others on the flight paid for their seats, Echazarreta was chosen by a nonprofit called Space for Humanity to fill an empty seat. Echazarreta, now working on a master’s degree in engineering at Johns Hopkins University, previously worked at NASA’s Jet Propulsion Laboratory and hosts a science-focused YouTube series. She is also a presenter on the CBS weekend show “Mission Unstoppable.”

Echazarreta said she has been motivated to excel in engineering since her time at NASA. “There are so many people in this world who dream about the same things that I was dreaming about. And yet I’m not seeing them here. So what’s happening?” she said. “It was not enough for me to have made it and to be there. I needed to also help bring others with me.”

Victor Vescovo, 56, the oldest member of the crew, had another motivation: exploration.  Vescovo has explored the deepest parts of the oceans with his submersible DSSV Limiting Factor and mothership Pressure Drop.

“It’s fun to be an aquanaut, mountain climber and astronaut,” Viscovo, 56, told Robb Report. “It’s a juxtaposition of extremes that actually share a great deal of rhyme in their extremes.”

Like Echazarreta, Viscovo said the view was more than memorable. “The complete curvature of the Earth, and seeing the thin fragile, atmosphere and this beautiful blue-and-brown planet that we have, and then the blackness of space,” he said. “To have that right in front of you was a transformational experience.” Vescovo was also struck by the complete contrast of black space and blazing sun.

The newly minted astronaut was surprised by the comfort of the flight, especially since his body was subjected to over 5-G force. He has flown fighter jets before, but since he was lying down in the capsule, it didn’t have the same sensory impact. “It was really a pleasant experience,” he says. The 10-minute flight also didn’t include a kind of time warp where time stood still for such dramatic speeds and sitting for a few minutes on the edge of space. “Oh, it seemed like just ten minutes, but it was the best ten minutes of my life.”

Another crew member who had gone to space, Evan Dick, advised his fellow crew members to forego the usual somersaults when they reached the Karman Line, and instead look out the windows. “He told us to look, really look and internalize the beauty of the Earth,” says Vescovo. “You do see how there are no dividing lines and how we are one species. It’s what they call the ‘Overview Effect,’ and it was very clear to me.”

The flight was so exceptional that Vescovo would like to do another—maybe even orbit the Earth. “It really intensified my love of space, but also of exploration—including continued exploration of the oceans,” he says. “One of my fellow crew joked that I don’t like to be at sea level. There’s some truth to that.”