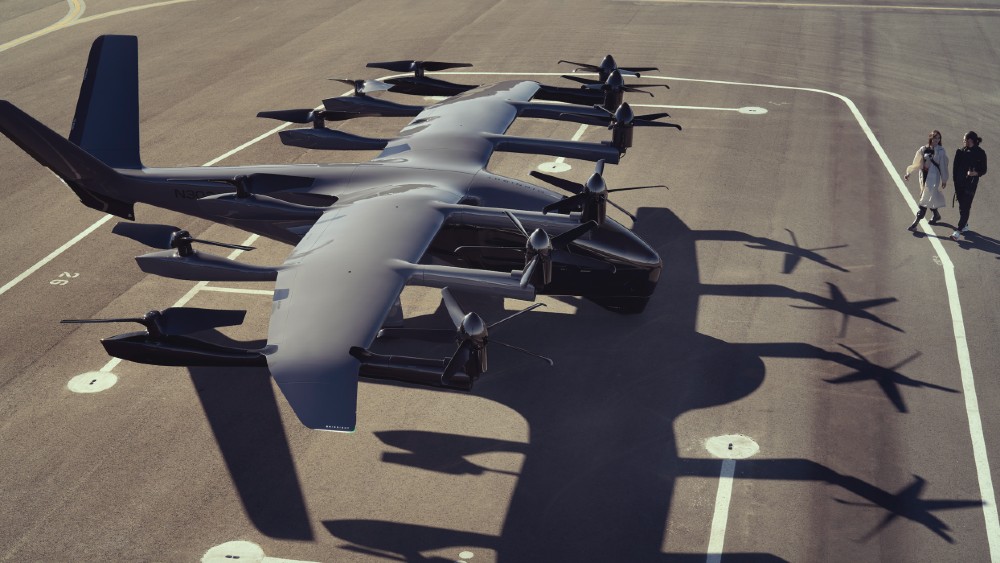 The buzz around eVTOLs, or electric vertical takeoff and landing aircraft, has been escalating at a fevered pitch in the last six months. Archer Aviation’s just-unveiled Midnight model stokes progress with an ambitious vision of future airborne mobility.

“We are confident we will be the first company to certify an eVTOL aircraft in the US with the FAA,” founder and CEO Adam Goldstein said yesterday at the reveal of the company’s 12-rotor flagship.

The new aircraft, which was shown off to aviation media in demonstration flights, is angling for certification in late 2024. The commercial launch of 250 aircraft is planned for 2025 as part of the brand’s so-called urban air mobility network.

Archer, along with numerous other eVTOL startups including Eve and Joby, is aiming to ease urban congestion by taking to the skies. Using zero emissions aircraft that resemble flying drones, these startups leverage tech that enables compact craft to negotiate tight city spaces and provide door-to-door transportation high above earthbound traffic jams.

Based on Maker, an Archer prototype engineered for feasibility testing, the production-spec Midnight is built around one pilot and four passengers and is fully powered by batteries. With a payload capacity over 1,000 pounds, Midnight is intended to fly 20-mile back-to-back trips interspersed with 10-minute charging sessions.

When moving along at its cruising altitude of 2,000 feet, Midnight’s noise levels are measured at only 45 dBA on the ground, which is 1,000 times quieter than a conventional helicopter. While these Jetsons-style aircraft are theoretically capable of revolutionizing urban transportation, some pundits claim that unknowns like potential engineering snafus and the vagaries of FAA certification could delay their rollout plans.

It may sound like a Blade Runner-inspired flight of fantasy, but the eVTOL movement has made considerable strides towards making these sci-fi-like aircraft a reality. Archer says it will tackle the Manhattan-to-New-Jersey route through its  $10 million partnership with United Airlines. United has also partnered with Eve, Delta has teamed up with Joby, and several airlines have joined forces with UK-based Vertical Aerospace.

A half-dozen eVTOL startups are also hooking up with carmakers in efforts bring relatable mobility collaborations to the sky.

While the competition will be fierce for the hearts and dollars of airborne commuters, Archer appears to be well positioned for this brave new world of eco-conscious transport. The firm has announced a $118 million factory near Atlanta, and is intent on hitting its goals of building 250 of its sleek Midnight aircraft by 2025—bringing a whole new twist to the ideal of flying the friendly skies.