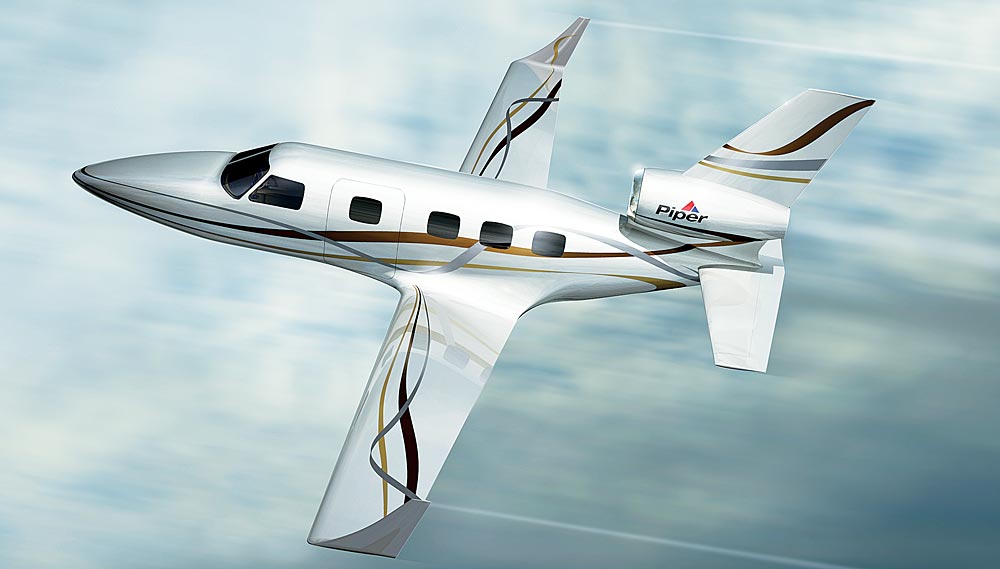 For many, the words small private airplane immediately conjure images of a Piper Cub, the iconic two-seat, bright yellow, wood-and-fabric propeller plane from the 1930s. Today, Piper Aircraft of Vero Beach, Fla., still manufactures airplanes—150,000 of them over the last 70-plus years—but the company no longer builds the Cub. Piper Aircraft would, however, be happy to sell you a luxurious, six-seat, single-engine jet.

The new PiperJet, which flew for the first time last summer, joins the small personal-jet market that emerged a few years ago when Diamond Aircraft introduced its single-engine D-Jet. Planes in this category are four- to six-seaters designed for the owner-pilot who wants both the performance and reliability of a jet and the simplicity and economical operation of a piston plane. Cirrus Design has one in the works, the Vision SJ50, and in 2007 Eclipse Aviation introduced a single-engine EA400 concept plane (though the company’s new management has not decided whether to continue the program). Owner-pilots can also choose from a field of small twin-engine jets, such as the Eclipse 500 and the Cessna Citation Mustang, and powerful turboprop airplanes, among them the Socata TBM 850 and Pilatus PC-12, which offer similar performance.

Jim Bass, CEO of Piper, is confident that the PiperJet will compete with all of them when it begins rolling off the assembly line in 2011. “People’s image of Piper may be the Cub,” he says, “but today we aim for a higher-end market. In fact, we have been building turbine aircraft for over 10 years.” The popular Piper Meridian model uses its turbojet engine to turn a big four-blade propeller.

The new PiperJet is the company’s first true jet aircraft, and it offers much more than just a Meridian upgrade—its design is totally new. Unlike most small jets, the engine is placed high, on the tail. This is tricky because aerodynamic control could be affected if the engine is not placed perfectly. Bass acknowledges this challenge but trumpets the benefits of the design. This positioning, he says, allows the plane to carry a bigger engine with less cabin noise and more interior space.

That beefy engine, a long, sleek fuselage, and a high-speed laminar-flow wing lend the $2.2 million PiperJet a compelling and memorable look. “There is no other jet quite like it,” Bass says. Big windows and the lack of center yokes—they are replaced by sidestick controllers—open up the cockpit for a spacious, high-tech feel. The control systems and instruments are state-of-the-art. Advanced bonding techniques create all-metal wings with a smooth fit and finish, so that the result looks more like a composite surface than the traditional metal with rivets and seams.

In a market where brand loyalty plays a vital role, Bass likely hopes that future generations will picture the capable new PiperJet—instead of the antique Piper Cub—when they hear the words small private airplane.