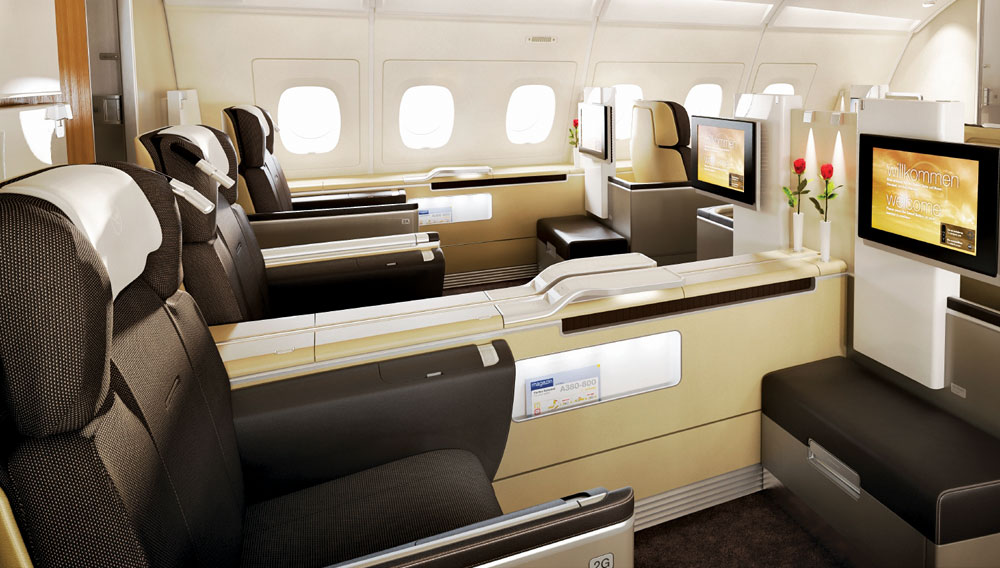 Since its debut in commercial airline fleets in 2007, the Airbus A380—the world’s largest passenger aircraft—has sparked a rivalry among international carriers to outdo each other’s first-class cabins. In May, Lufthansa became the fifth airline to take delivery of the jumbo jet, and the German company’s new premier cabin has helped raise the bar by lowering capacity.

Lufthansa used the double-decker A380’s additional real estate to increase the number of seats in business class (98) and economy (420) compared with the carrier’s other large jets; however, it limited the first-class section to only eight seats—the same number it allocates to the relatively diminutive A330 models in its fleet. The limited seating grants Lufthansa’s first-class passengers nearly eight feet of reclining space, which is the most of any commercial A380 cabin.

Lufthansa’s A380 first-class section occupies the front of the enormous plane’s upper deck and includes two large bathrooms that offer full vanities, separate lavatory areas, and leather-clad benches, which make it easier to change clothes in flight. Where other carriers have opted for individual suites, giving cabins a more closed-off feel, Lufthansa’s A380 layout is open. Passengers can slide a screen up for privacy, and each seat reclines to a completely flat bed that is nearly as large as an extended twin-size mattress.

This less-is-more design approach stands in direct contrast to the over-the-top options from some other carriers. The Dubai-based airline Emirates offers 14 distinct suites in its A380 first-class section, each with a minibar, vanity table, and closet. Singapore Airlines, the first carrier to receive an A380, outfitted its first-class section with 12 enclosed suites that feature reclining seats and separate flat beds. Air France’s A380s have nine first-class seats and a private bar, while Qantas’ A380s feature 14 space-age-like first-class suites created by designer Marc Newson. The compartments’ seats swivel and have a massage feature, and passengers are offered a menu by top Australian chef Neil Perry and pajamas designed by Akira Isogawa.

Lufthansa’s decision to keep its premier cabin simple was based on a survey of 2,000 of the carrier’s first-class travelers, whose biggest concerns were noise, air, space, and privacy. As a result, Lufthansa’s A380 employs sound-absorbing curtains and a special humidifier that raises the air moisture to as much as 25 percent (compared with about five percent in most first-class cabins).

The carrier’s first route with the A380 flies between Frankfurt and Tokyo; later this year the company will introduce additional routes from Frankfurt to Beijing and Johannesburg, South Africa. A round-trip ticket for one of the eight first-class seats from Frankfurt to Tokyo costs about $15,000.