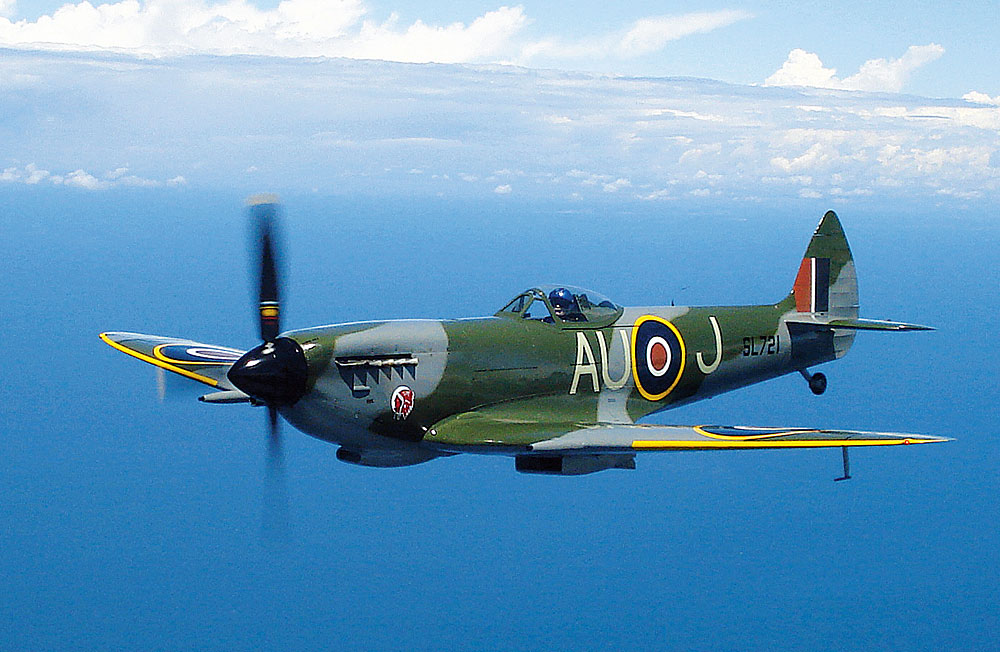 By the late summer of 1940, battle-weary Britain found itself outmanned and outgunned by Hitler’s forces. Believing that the Royal Air Force (RAF) was exhausted and vulnerable, Germany focused its aerial firepower on London in an effort to bomb the British into submission. Yet, in one of the greatest David-and-Goliath stories of World War II, Germany’s plan failed. As wave after wave of Luftwaffe bombers and their fighter escorts approached the British Isles and it appeared that all was lost, scores of the RAF’s powerful Spitfire fighters—fast, agile, state-of-the-art planes—took to the skies above Kent and Sussex to do battle. The Spitfires shot down Nazi aircraft by the hundreds, proving to the world that Britain was not ready to give up the fight. The bravery of British airmen inspired Winston Churchill’s famous thank-you: “Never in the field of human conflict was so much owed by so many to so few.”

The Spitfire, a single-seat, single-engine piston airplane built by Supermarine Aviation Works, occupies a hallowed place in aviation history. Yet of the more than 20,000 that were manufactured in the 1930s and ’40s, only about 50 are still flying. Collectors, who now pay a market price of $3 million or more per Spitfire, prize these fighters not only for their histories, but also for how fun they are to fly. Spitfires are powerful, maneuverable, and capable of speeds up to 450 mph. “These are beautiful machines—they are works of art, really—and they’re not making any more of them,” says Tony Raftis, president and owner of Provenance Fighter Sales in Murrieta, Calif.

Raftis’ company is currently restoring a Supermarine Spitfire XIV that joined the RAF in 1945 and served in Southeast Asia. Later, the Indian Air Force took possession of it. A British collector bought the plane in 1981 and restored it. In 1996 it was badly damaged in a crash in New Zealand. Eventually, a new owner started a fresh restoration of the wreck, but the project languished for lack of funds. In 2007, Provenance bought the fighter, and the company is now rebuilding it to like-new flying condition in New Zealand. Upon completion later this year, the plane will be dismantled and delivered to the United States, ready for sale.

Simon Brown, Provenance’s vice president and general manager, says he does not expect the Spitfire to remain on the market for very long, even with a $3 million price tag. Despite widespread concerns over the economy and fuel prices, he says, he has not seen any downturn in demand for vintage warbirds. “We can’t keep airplanes in stock, they go so fast,” he says. “And I see no end in sight.” Projects that had been in storage for years because they would never recoup their restoration costs are coming back on the market. However, even that supply is running out fast, and demand just keeps growing, Brown says. “I think some buyers see it as an investment—maybe a better one than many alternatives these days,” he explains. “And for buyers abroad, the exchange rates make it a bargain.”