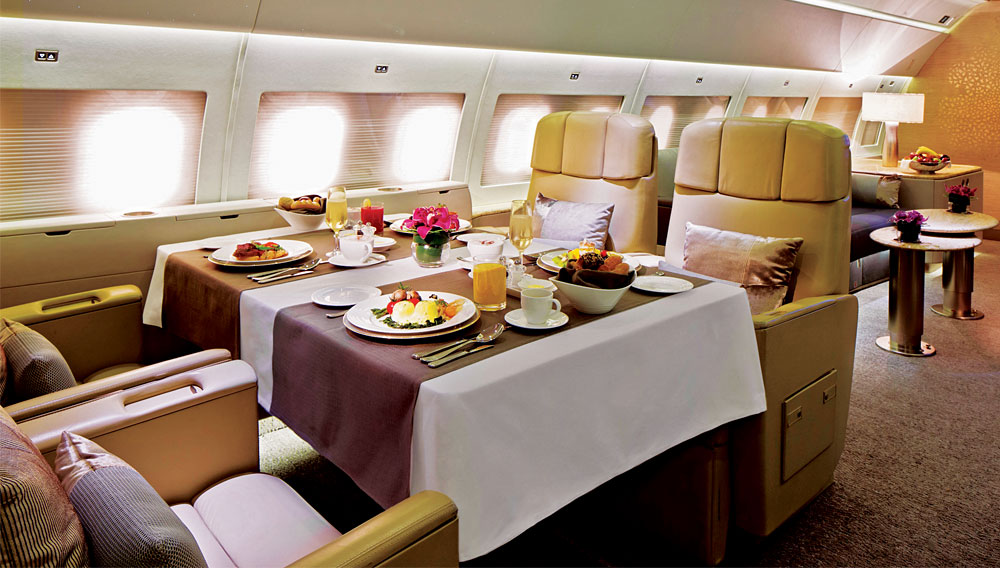 As a commercial jet, the Airbus A319 is a workhorse of the airline industry, seating from 124 to 156 passengers. As a private jet, it has been configured for use primarily by heads of state, political leaders who require privacy when flying long distances but also need space to interact with staff. The Dubai-based and government-owned Emirates airline—the largest airline in the Middle East, with more than 3,000 flights per week—recently configured an A319 for private flight, dubbed it the Emirates Executive, and began offering it for charter.

The A319 model has a slightly wider fuselage than the Boeing Business Jet, the Gulfstream G550, or the Bombardier Global Express, which means that it offers an even roomier interior when reconfigured as a private jet. The Emirates Executive has enough room for most entourages: It seats as many as 19 passengers. The aircraft has a cruise altitude of 41,000 feet and a cruise speed of 540 mph. It has a range of nearly 5,000 miles, enabling it to deliver passengers nonstop from Dubai to any point in Europe, Africa, and India and much of the rest of Asia. Emirates says the Executive aircraft is available to fly to and from most cities throughout the world, including those that are outside the airline’s network. (Emirates offers commercial flights between Dubai and eight North American cities, including New York, Los Angeles, and Dallas. It was scheduled to add a nonstop route from New York City to Milan in October, after this issue of the magazine went to press.) Emirates has not disclosed any prices for chartering the A319 and has not indicated whether customers departing from destinations outside the Middle East will pay a surcharge for deadhead flights.

The Emirates Executive is managed by ExecuJet Aviation Group, a private-aviation company based in Zurich that manages, sells, and charters aircraft and runs 18 fixed-base operators throughout the world, including one at Dubai International Airport. The one-of-a-kind interior of the Emirates Executive was designed and built at the Airbus Corporate Jet Centre in Toulouse, France. The front of the cabin features a dining and lounge area that seats as many as 12 passengers, and a work and relaxation area that is furnished with two couches, four tables, and two 42-inch LCD screens. The jet’s entertainment and communication systems include on-demand video, live TV, video conferencing, high-speed Internet access, and mobile-phone connectivity.

Toward the rear of the cabin are 10 mini-suites, each of which includes a fully reclining seat and a 32-inch LCD screen. The aircraft’s lavatory has a full shower and a heated floor and is stocked with luxury skin-care products. The galley will accommodate any menu requests, and charter flights include limo service to and from the airport.