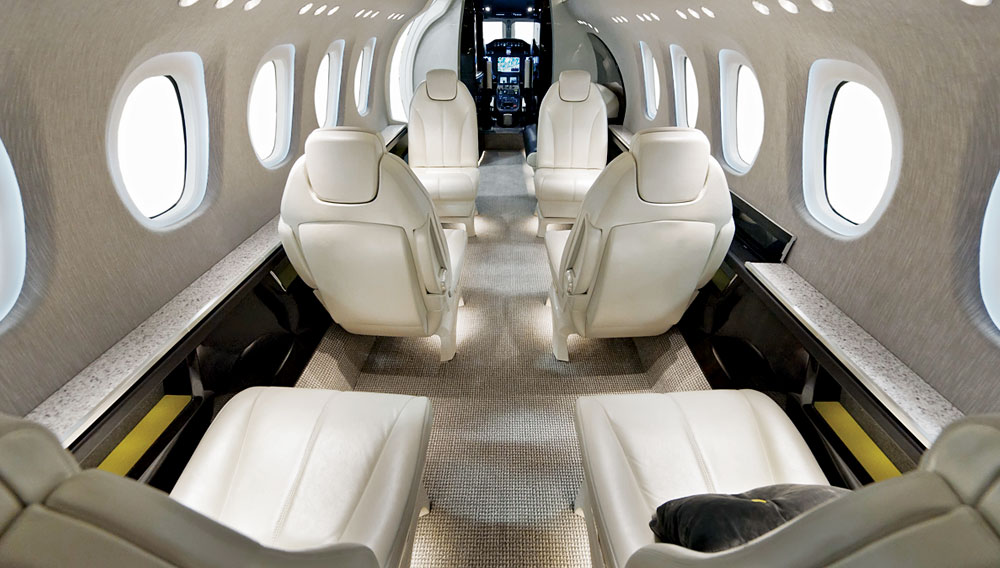 Cessna’s Citation business jets have long been lauded for their speed, reliability, and performance, but they also have been criticized for their cramped cabins. The company has addressed this shortcoming by adding width. The new Citation Latitude, a $14.9 million midsize jet that Cessna expects to begin delivering in 2015, has a cabin measuring 6.4 feet across, making it the company’s widest ever. (The cabins of the light-midsize Citation XLS+ and the super-midsize Sov­ereign are only 5.6 feet wide.)

The Latitude’s cabin, which can accommodate as many as eight passengers, also offers 6 feet of headroom (versus 5.7 feet for the XLS+ and the Sovereign) and a flat floor—a rare feature for a midsize model.

According to Brad Thress, senior vice president for Cessna’s business jet division, Cessna sells more than 70 percent of its aircraft to repeat buyers. “[The Latitude] aims to keep those buyers in the family,” he says. In addition to a roomy cabin with large windows, the Latitude features fiber-optic wiring systems in the flight deck and passenger areas, Wi-Fi Internet access, and touchscreens with which passengers can control media, lighting, and other cabin functions. The jet has a maximum range of 2,300 miles, which Cessna notes is sufficient to fly nonstop from Los Angeles to Washington, D.C., in the right wind and weather conditions.

The new Citation M2 light jet also should appeal to current Cessna owners, in particular those looking to move up from the Citation Mustang. The $4.2 million M2, which Cessna plans to begin delivering in 2013, is replacing the discontinued Citation CJ1+ as an upgrade from the entry-level $3 million Mustang in terms of performance and space.

The Mustang is Cessna’s smallest jet in current production, and the majority of owners fly it themselves. These owners have been clear about what they want from their next jet: “a larger cabin with six seats, a private lavatory, and more speed,” says Thress. The M2 provides all of those features, plus a single-pilot cockpit that, like the Mustang, makes the jet appealing to owner-operators. The M2 requires only 3,250 feet of runway to take off, and it has a cruise speed of 460 mph, which is about 70 mph faster than the Mustang’s. Its maximum range is 1,500 miles—nearly 173 miles more than that of the Mustang—and it takes just 24 minutes to climb to its maximum altitude of 41,000 feet.