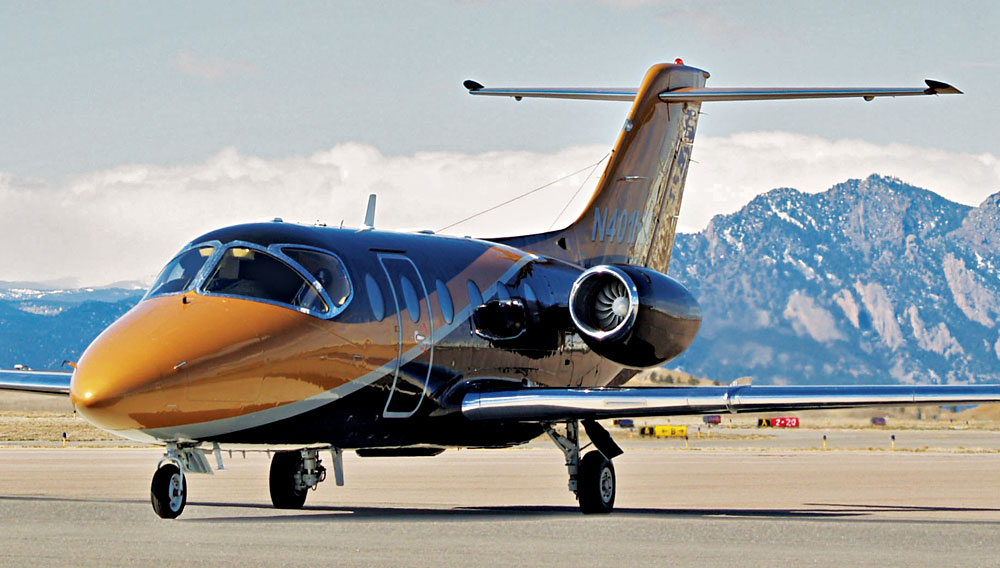 Flight Options clients who travel in one of the company’s Nextant 400XTs might find the light jet familiar if they have ever flown in a Beechjet 400A or Hawker 400XP. Nextant Aerospace, an aircraft-remanufacturing company based in Cleveland, is refitting these models with new avionics and new engines to create the 400XT—a faster, longer-range, and more fuel-efficient plane. It is available in four cabin configurations and can seat as many as eight passengers.

Nextant notes how favorably the 400XT compares to the Beechjet 400A, which went into production in 1990 and was upgraded and rebranded as the Hawker 400XP in 2003. It claims that the 400XT burns 32 percent less fuel than the 400A, climbs to its cruising altitude 33 percent faster (in 23 minutes), and has a range (when carrying four passengers) of about 2,300 miles, versus about 1,500 miles for the Beechjet. The company also points out that with a price of $3.9 million (for the entire aircraft, not just the upgrade), the 400XT costs about half as much as new aircraft with similar capabilities.

Hawker Beechcraft offers its own upgrade to the Beechjet 400A and Hawker 400XP. Called the XPR, it includes engine and avionic improvements and the addition of winglets. The roughly $2.6 million price covers just the upgrade, not the cost of the aircraft.

Flight Options has ordered 40 400XTs, and the company expects to take delivery of its first plane in July and of four more aircraft by the end of this year. Nextant plans to deliver the entire order over the next five years.

It is not surprising that Nextant’s first orders have come from Flight Options: Kenn Ricci, Nextant’s founder and CEO, also founded Flight Options, in 1998, and is now the private-flight company’s chairman.

It also is not surprising that Nextant has focused its efforts on the Beechjet 400A and the Hawker 400XP—planes that have long been staples of charter fleets. Passengers rave about the planes’ roomy cabins and many windows, generous storage space, and high cruising altitude, which produces a smooth ride. If there are any complaints, they involve the models’ relatively short range. Several years ago Ricci, who has been in the private-aviation business for three decades, began to consider ways to boost the power and fuel efficiency of the planes’ engines and thereby increase their range. Moreover, he wondered if the existing fuselages could have second lives as new aircraft.

“One objection was that the airframe is going to wear out faster than that of a newer airplane,” says Ricci. To address this concern, Nextant, in addition to installing new engines and new avionics, also is replacing all of the aircraft’s wiring and its landing gear, actuators, and windows. “We have the fuselage completely open,” says Ricci, “so we replace everything that tends to wear out.”