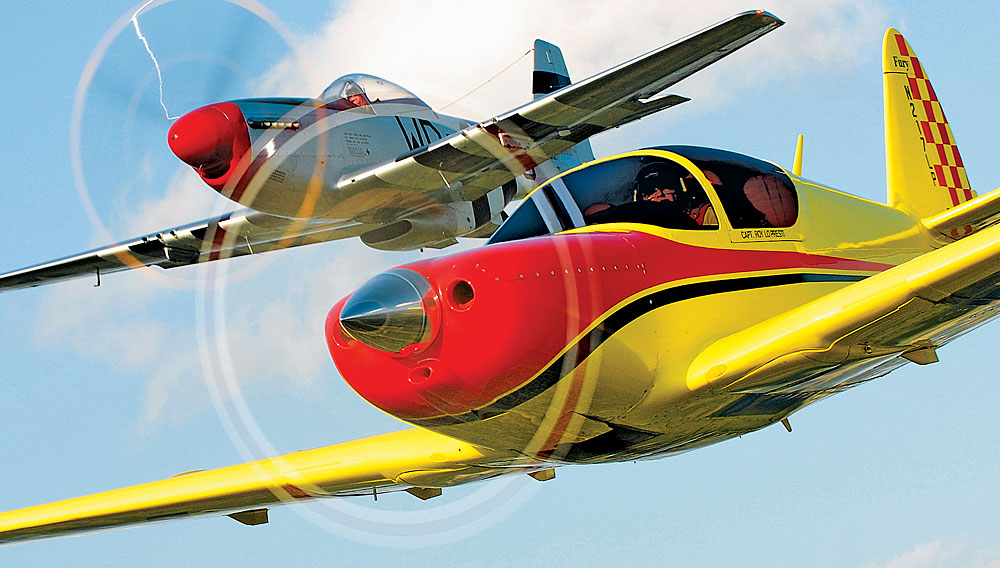 LoPresti’s single-prop flier, the Fury, is no shaky aerobatic bird, nor is it restricted in range or speed. Built with the nerves of a stunt plane and the brawn of a military fighter, this design is a true pilot’s aircraft. Immediate and precise response from perfectly harmonized controls makes maneuvering the Fury effortless—even when it flies inverted. In fact, Sebastian, Fla.–based LoPresti expects that the Fury will appeal strongly to pilots who revel in the thrill of flight but also demand superior performance to make short work of cross-country trips.

Other manufacturers have introduced comparable aircraft, but most of these have been designed purely for transportation. Adventurous aviators such as Corkey Fornof, a movie stunt pilot and LoPresti’s director of flight operations, want more than a means of conveyance: They want a dynamic aeronautical experience. Fornof has conducted numerous long-distance flights and rigorous aerobatic exercises in a Fury, flying inverted nearly as often as he does right-side up. “I roll the Fury about every 50 miles,” he says. “It’s just so much fun.”

But the Fury is a capable transport, as well; it can carry two passengers, a pair of golf bags, and 150 pounds of luggage 1,000 miles at a cruising speed of 215 mph. A 4-cylinder 200 hp Lycoming engine allows LoPresti to license the Fury in the aerobatic category, but the plane also possesses the structural strength and ballistics of similar-size fighters. With flawlessly weighted controls and retractable landing gear, the Fury boasts military handling characteristics that make it both maneuverable and stable when pointed at a target.

LoPresti expects deliveries of the $355,000 Fury to begin in 2012, and intends to take a somewhat pragmatic approach to production. “Only 60 aircraft will be built per year,” says CEO Curt LoPresti. “Each will be built to order, with no construction targets and no inventory of aircraft to maintain. The plan is to build in groups of five aircraft and deliver each batch all at once.”

These modest production numbers have helped spur considerable demand for the Fury. When LoPresti introduced the model last summer at the EAA AirVenture convention in Oshkosh, Wis., the first year’s production of aircraft quickly sold out. For this reason, buyers in search of fun and performance should hurry to place their orders for the second flock of Furys to take flight.