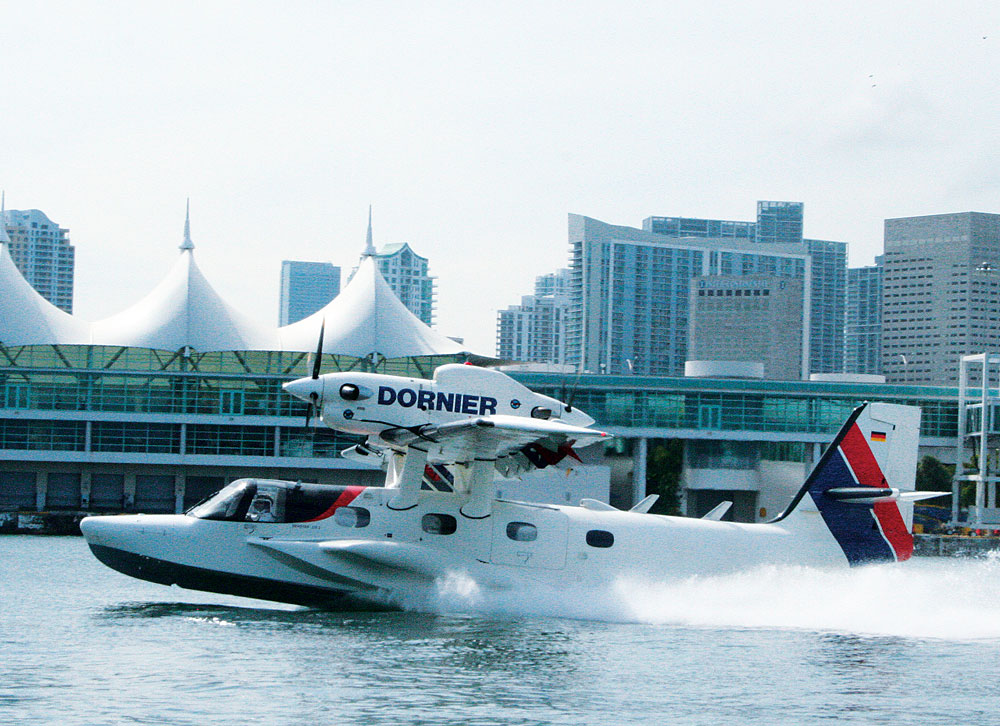 The Dornier Seastar looks like a prop created for a James Bond movie. It has the hull of a boat, the wings of an airplane, and two big turboprop engines placed back-to-back above the cabin. Yet despite its almost cartoonish appearance, this is a serious and capable aircraft. “It’s big, it’s roomy, and it’s fast,” says Joe Walker, CEO of Miami-based Dornier Seaplane Company. “And it’s definitely different.”

The Seastar is, indeed, different from many of its current competitors in the aeromarine market. Unlike the fuselages of float planes—the famous de Havilland Beaver, for example, sits high above the water on pontoons—the Seastar’s hull rests on the water like a boat, a design that lowers the aircraft’s profile and reduces wind resistance. Consequently, it can take off in strong winds and rough waves. It also has retractable landing gear for use on runways. The Seastar’s engine assembly is somewhat novel as well, with two Pratt & Whitney Canada PT6A-135A turboprop engines in an inline arrangement that has one propeller facing forward and the other facing backward. These engines propel the aircraft to a top speed of about 207 mph and allow it to run for more than 800 miles without refueling.

As original as this aircraft seems, it actually comes with an impressive aviation pedigree. Conrado Dornier, who founded the Dornier Seaplane Company, is the grandson of Claude Dornier, a pioneer in the German amphibious-?aircraft industry who invented the “push-pull” engine design featured on the Seastar. “The Seastar is based on an original design from the 1920s but is fully updated with new technology,” Conrado says.

Among those technologies is a hull made out of a composite material that does not leak, corrode, or rust. In the 1990s, the Seastar was among the first all-composite aircraft to be certified in Germany and, Dornier says, was ahead of its time, considering the aviation industry’s initial skepticism toward the material. “Now that more aircraft manufacturers, such as Boeing and Airbus, are using composite material, we think the market is ready for the Seastar,” he says.

The market to which he refers is actually a niche that is somewhat underserved; aircraft manufacturers are not rushing to build flying boats these days. Yet the Dornier family, which made its fortune as leaders in the aeromarine field, sees enough potential to invest roughly $150 million in the Seastar program, which the family hopes will deliver its first aircraft in 2010. Such potential may lie in the high-end luxury market. According to Dornier, the $6 million, six-to-12-passenger Seastar is ideal for those who live on the waterfront or need to transport crew and guests to and from a private island. He says, “It would also be perfect as a shadow plane for the owner of a megayacht.”