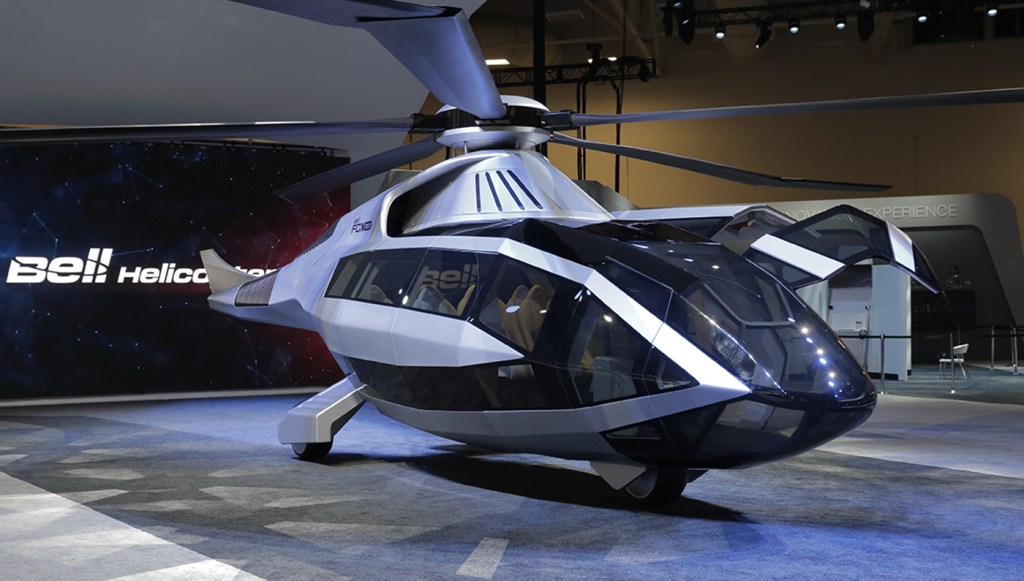 A helicopter may seem at first glance like a simple, whirligig flying machine, but in fact it’s an incredibly complex collection of rotating parts that requires great skill to fly and maintain. How to design the next generation of helicopters presents a daunting challenge—with so much going on, every tiny tweak trips a chain of other changes that must be made, and progress is excruciatingly slow.

But now Bell Helicopter, a Textron company, has for the first time stepped up to take on the challenge to imagine and create a conceptual helicopter of the future. The new concept aircraft, the Bell FCX-001, incorporates cutting-edge technologies with the aim to make helicopters smarter, safer, more efficient, and easier to fly.

The FCX-001 is the result of six months’ work by a team of engineers and graphic designers. It’s essentially a three-dimensional road map, incorporating emerging technologies and innovations into a package that allows both the creative team and future customers to imagine the next generation of helicopters. The new technologies include a hybrid propulsion system that’s simpler to operate and maintain, an anti-torque system in the tail boom that’s safer and quieter, morphing rotor blades for enhanced efficiency, and an advanced flight deck to ease the pilot’s workload.

For passengers, individualized augmented-reality systems in the cabin make it easy to choose from a range of options—catch up on world news, host a video conference, share documents with other passengers, or relax with a movie or music. The FCX-001 is just the first step in creating the helicopter of the future, says Bell. The engineering and design team continues their work, behind closed doors—and when they’re ready, Bell will reveal the next step in the evolutionary road map for rotary flight.  (bellhelicopter.com )