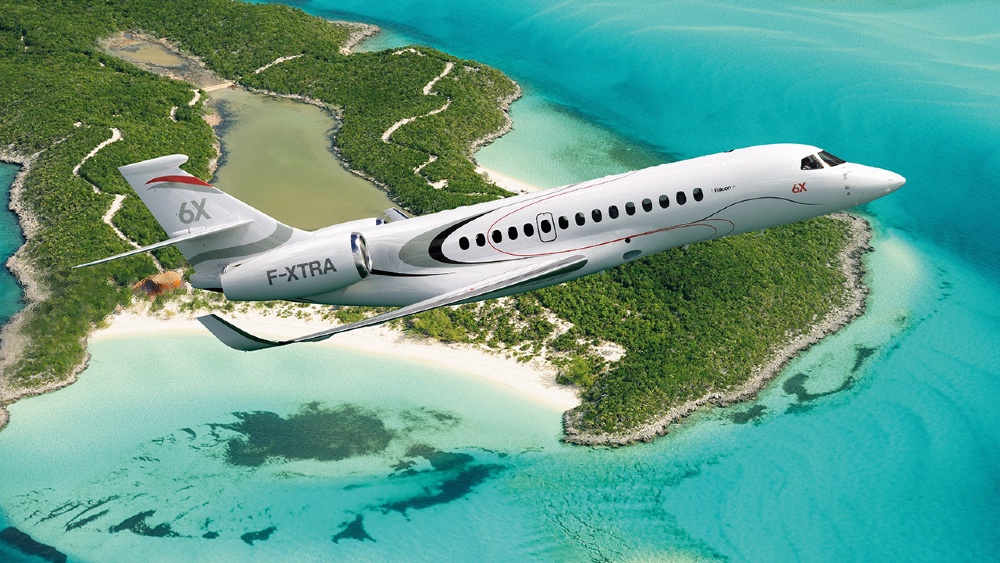 They may be categorized across different classes and sizes, but the offerings from Gulfstream, Dassault, Bombardier and ACJ have this trait in common: They maximize interior space, squeezing every possible inch from the fuselages, while combining more efficient powerplants with ever-advancing avionics. Here are 2020’s fab five from Europe and North America.

The Dassault 6X is designed for transoceanic travel, but it’s also able to land in airports with unusually steep approaches.  Courtesy Dassault Aviation

Announced earlier this month, Dassault’s 16-seat, long-range, ultrawide-body Falcon 6X, with a 5,500-nautical mile range and top speed of Mach .90. With largest-in-class interior, 6X has the highest and widest cross-sections of any purpose-designed business jet. Dassault designed the 6X with comfort and ergonomics in mind, with all entertainment and communication ergonomics close at hand. The natural light is also unprecedented, with 30 large windows (total of 5,000 square inches of glass) and the first overhead skylight in its class. Beyond the natural light is “mood lighting” that creates different-colored lighting to promote contrasting environments.

Like its ultra-long-range Falcon 8X sibling, the Falcon 6X cabin is pressurized at a comfortable 3,900 feet when cruising at 41,000 feet, and the cabin air is refreshed continuously to deliver, according to Dassault, an environment that is 10 times cleaner than today’s most advanced office buildings.

The cabin is the largest and widest in its class.  Courtesy Dassault Aviation

The twin-engine Falcon 6X also has an impressive low-speed performance, on top of its long range. This ability to fly at 109 knots allows it to land in challenging, steep-approach airports like London City, Saint-Tropez and Aspen.

Based on a 150-seat Airbus’ A220-100 commercial airliner, which seats 150, the new 18-seat ACJ TwoTwenty has an immense interior that measures 785 square feet.  Courtesy Airbus Corporate Jets

Airbus Corporate Jets’ TwoTwenty is so large that it contains a king-sized bed and full shower, while still able to accommodate 18 passengers. Based on Airbus’ A220-100 commercial airliner, which typically seats about 150, instead of a dozen, Airbus believes it should have its own category—the XtraLarge Bizjet.

“The aircraft combines intercontinental range, unmatched personal space and comfort for all passengers,” said Benoit Defforge, ACJ president, adding that it has “flexible interior catalogue” to accommodation customization of the cabin.

The 220-100 is 25 percent more fuel efficient and 50 percent quieter than similar previous-generation aircraft. It can fly 5,650 nautical miles—say from L.A. to London—without refueling, or the equivalent of roughly 12 hours in the air.

The Global 5500’s 5,900-nautical mile range is 700 miles better than its nearest competitor at the same speed. It also has the widest cabin in its class.  Courtesy Bombardier

The first Global 5500 business jet  entered service in November, after completion at the Bombardier manufacturing facility in Wichita, Kansas. The Global 5500 has a 5,900-nautical mile range—200 nautical miles more than originally planned—and 700 more nautical miles than its nearest competitor at the same speed.

The 5500’s Rolls Royce Pearl engines deliver a top speed of Mach 0.90. It has an optimized wing with a reprofiled trailing edge to deliver a smoother ride.

The 5500 also has the widest cabin in its class, measuring 7’11”, with a cabin height of 6’2”, and length of 40’9”. It’s unclear how many seats this particular Global 5500 has on board, because the first customer wanted to keep that information private, but the aircraft’s generic interior can seat up to 16 passengers.

The new passenger-focused technologies on board the aircraft include a Pũr Air filtration system, which eliminates 99.99 percent of allergens, pathogens and viruses, while providing the cabin with clean air every 90 seconds. The interior also has 4K entertainment, with a media center and HDMI and WiFi. The aircraft is also outfitted with patented Nuage seating, which has a unique “deep-recline” feature. The Bombardier Vision flight deck in the cockpit is the first to overlay infrared and synthetic terrain imagery for what the company calls “true combined vision” for smooth landings in challenging conditions.

The G700’s largest-in-size interior is divided into zones, including an entertainment center, dining area and bedroom.  Courtesy Gulfstream

We were able to visit the full interior mockup of the Gulfstream G700, expected to enter service in 2022, at Gulfstream’s headquarters in Savannah, Georgia. The extra 10 feet of interior space between Gulfstream’s new G700 and its next-largest model, the G650, allowed it to have five zones. “We already had seating for 13 in front on this jet,” said Tim O’Hara, Gulfstream’s director of design innovation. “For long missions, it made more sense to have a bedroom.”

A bedroom with its own en suite is the ultimate asset of any business jet interior, and on the world’s largest, it’s a sanctuary. The bed’s smart-foam mattress declined, with a button push on the plane’s smartphone app, from recumbent seating into full-sleep position, while the lights dimmed in parallel and the oval windows went from transparent to dark. The soft-lit room, with equally soft music, became more luxe hotel than all-business lounge.

O’Hara and his design team took about several years for this new interior, including subtle S-curves, in the seats, bulkheads, carpeting, along the ceiling and even in the artwork near the entry. The five “zones” were dressed in a planked walnut, with black ebony as the accent. The 21 x 28-inch oval windows provided exceptional views and natural light—or at least they would have in the real world. Even the LED lighting overhead had a curved architecture so that the bulbs remained hidden. O’Hara’s team also came up with 10 test modules for seats.

Gulfstream gave extra space to the galley, designing it with a 10-foot-long counter, conventional oven and full-sized fridge, so that chefs could prepare meals on long-haul flights. The Casablanca marble, black-tinted cabinets and leather-covered lounge give it an understated, elegant look.

The entertainment area includes a 43-inch screen rising from a credenza. As a movie comes on, the lights and windows automatically darken. There are no speakers; instead, the surround sound is projected via transducers behind wall panels. In the rear bedroom, the circadian lighting mimics daytime across time zones, but at a faster rate. That, and the low cabin altitude, should ensure a more refreshing sleep so you’re fully awake and powered up when the G700 drops you gently on another continent. The G700 will have a top speed of Mach 0.925 and range of 7,500 miles, meaning it can fly from New York to Delhi nonstop.

The Learjet 75 Liberty, which entered service in November, is based on the Learjet 75 platform, but parent company has lowered the price to $9.9 million by taking out some features. Taking on competitors in the light-jet category with a midsized-jet cabin, the six-seat Liberty is the first in the category to offer an Executive Suite. The aft cabin features a four-seat club configuration.

It also has a more stringent safety Part 25 certification rating from the Federal Aviation Administration, which differentiates it from the rest of the light-jet fleet.

The 75 Liberty’s executive suite of seating is unique in the light-jet category.  Courtesy Learjet

Bombardier announced recently that Gogo Avance L5 will be an option on the Liberty model. Designed specifically for business aircraft, the system offers audio and video streaming as well as faster web surfing for a vastly improved user experience over previous-generation technology. The network is the fastest and most reliable 4G air-to-ground
high-speed internet coverage in North America.