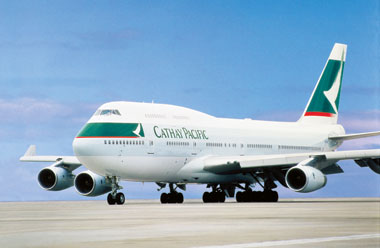 The acclaimed airline returns to its routes.

Legend has it that American entrepreneur Roy Farrell and a group of foreign correspondents, doubtless inspired by Marco Polo’s 13th-century adventures in the land he called Cathay and we now know as China, cooked up the name Cathay Pacific in a bar somewhere in Manila. This would have been in 1946, the year that Farrell and his Australian partner, Sydney de Kantzow, founded the new airline in Shanghai, where it offered flights to Bangkok and Singapore. Shortly after relocating its hub to Hong Kong in 1948, Cathay Pacific became the region’s leading airline. However, in 1990, under Hong Kong’s one-route, one-airline policy, Cathay Pacific was prohibited from flying to mainland China, including Shanghai, the city where it originated.

But today, as China experiences burgeoning economic growth (and consequently has become the world’s fastest-growing aviation market), Cathay Pacific is once again flying into Shanghai, as well as Beijing and Xiamen. Cathay’s first-class travelers enjoy spacious sleeper seats, scrumptious menu selections, world-class lounges (which include personal spa rooms), and, of course, the first-rate hospitality for which Asian airlines have become so well-known.

In for the Long Haul

Time flies on Singapore Airlines—even on the carrier’s new nonstop flights between Los Angeles and Singapore, the longest uninterrupted service in aviation history.

Introduced in February, Singapore’s ultralong-haul Airbus 340-500 features a fully reclinable business-class seat that provides ergonomic support for the body. Dining menus, designed by the company’s international culinary panel, tempt the palate with courses such as marinated lobster on soba noodles, and are complemented by the finest wine list in the sky. In-flight entertainment can be found on the carrier’s 250 channels of movies, TV shows, music selections, and video games.

In August, Singapore Airlines will begin nonstop service to New York. In the meantime, the 7,937-nautical-mile flight from Los Angeles reigns as the duration king at just over 18 hours—hardly enough time to enjoy all that the airline has to offer.

Close the doors to one of the 12 fully enclosed first-class suites on the Emirates Airline A340-500 and select a beverage from the minibar. If you are hungry, summon room service and order a meal. E-mail can be sent from your seat via the communication system, which also provides 500-plus entertainment channels. If you need to stretch your legs, you can stand up straight—even if you don’t ride Thoroughbreds for a living—because there are no overhead lockers in the suites.

The cabin’s lighting minimizes jet lag by simulating the change from sunshine to darkness as the plane passes through different time zones. When you are ready for sleep, the leather seat converts to a flat bed, enabling you to arrive refreshed in Dubai or home.