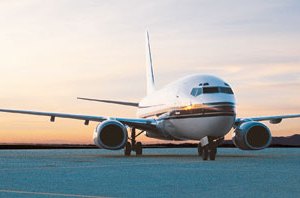 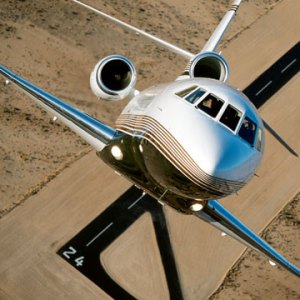 Gulfstream’s G550 is the ideal business jet for those who do not want to compromise when traveling for professional or personal purposes, who prefer to reach their destinations with minimum drama and maximum efficiency, and who require flexibility, capability, and safety from their means of transportation.

“With the G550’s extraordinary performance, state-of-the-art technology, unsurpassed comfort, and built-in reliability, we expect this aircraft will follow the same path as its predecessors, becoming the best-selling business jet in its class,” Gulfstream president Bryan Moss said last year, when the company’s newest jet received FAA approval. “We are confident the G550 will become the standard by which international business travelers compare all other ultralong-range jets.” Indeed, it has become that jet.

Gulfstream’s flagship offers a classic profile, pulse-quickening performance, and a 50-foot-long cabin that can be outfitted from a wide range of options. It also has sufficient range, speed, and comfort to make brunch in Paris an effortless affair—for you and as many as seven guests, all of whom can stay in touch with their offices or homes through an optional satellite-based broadband Internet connection. Gulfstream strongly encourages its customers to let it complete the interiors and offers at least six different floor plans, including a choice of forward or aft galleys, plus a wide range of FAA-approved wood, carpet, and fabric options.

The advanced technology that Gulfstream employs makes the jet as appealing to pilots as it is to passengers. Every G550 is equipped with Gulfstream’s Enhanced Vision System (EVS), which uses infrared technology to help pilots see through darkness and fog and more easily approach their destinations, which, with this aircraft, can be remote. While other manufacturers are now offering similar see-in-the-dark systems, Gulfstream’s EVS is recognized for its safety enhancement by the Fédération Aéronautique Internationale. The system also earned Gulfstream a Honeywell Bendix Trophy in 2002, an annual award administered by the Flight Safety Foundation that recognizes “contributions to aerospace safety by individuals or institutions through innovation in advanced safety equipment and equipment utilization.”

At its long-range cruising velocity of 80 percent of the speed of sound, or Mach 0.80, the G550 can take you, your crew, and seven passengers as far as 7,768 land miles—or from Los Angeles to Tokyo or Sydney in one hop. If time is more important than range, the G550 can rocket along at Mach 0.87. After directly reaching 41,000 feet in 22 minutes, and a step-climb the rest of the way, it cruises at a maximum altitude of 51,000 feet, well above the weather.

In addition to speed and distance, the G550, with a takeoff weight of 91,000 pounds, offers the convenience of access to smaller airports that are off-limits to other large jets. For example, the Port Authority of New York and New Jersey has imposed a 100,000-pound weight limit at Teterboro Airport, near Manhattan, which prevents larger aircraft such as Boeing’s BBJ2 from using it.

Gulfstream’s base price for a G550 is $46.75 million, which covers the cost of a completed interior with all of the furnishings, such as glassware and flatware, plus EVS. The only G550 option is the Internet access system for $625,000.

The longer the flight, the more apparent a business jet’s lack of cabin space becomes. However, distance is not a concern when flying aboard the Boeing Business Jet 2, even on a trip that covers its maximum range of 8,205 land miles. The BBJ2 has more than 1,000 square feet of cabin space, which some owners have configured to include a spacious executive suite with a queen-size bed and a full-size shower. Such a setup still leaves enough room for a private office.

Based on the company’s 737-800 airliner, the BBJ2 features the airline-quality reliability, systems redundancy, and safety many other business jet manufacturers wish they could offer. But because of its maximum weight, the BBJ2 is prohibited from using a number of smaller, close-to-the-cities airports. Its size, in part, also limits the BBJ2’s maximum cruising speed of Mach 0.82, which is slightly slower than other business jets; its maximum cruising altitude of 41,000 feet also  is slightly lower.

A green BBJ2—one without a finished cabin—carries a price tag of $54.5 million. How you configure and use all of that space depends on your preferences and your budget.

Just out of the gates is the Bombardier Global 5000, the Canadian manufacturer’s continent-spanning thoroughbred that is powered by two Rolls-Royce turbofan engines producing 14,750 pounds of thrust. These engines propel the Global 5000 to a high-speed cruise of Mach 0.89 (590 mph) and allow the jet to climb to 43,000 feet in 25 minutes.

While enjoying this performance, you and your guests can relax in the 5000’s cabin, which, at just over eight feet, is the widest in its class—wider than the G550, but not nearly as roomy as the BBJ2—and includes three different electronically controlled temperature zones. As the jet’s name implies, long flights are the Global 5000’s forte: From Dallas, for example, most of South America is within easy reach.

Pricing for the Global 5000 is set at $34 million for an equipped airplane. Deliveries of the first batch of the new jets began this spring.

With its three Honeywell engines putting out 5,000 pounds of thrust each, the Dassault Falcon 900EX can bring peace of mind that most other personal jets do not offer, especially on long, over-water trips. A further sense of security is derived from the cockpit, which the French manufacturer has equipped with its EASy flight-deck concept, a highly integrated system that uses the latest in flat-panel monitors and automation technology to display critical flight information. Your crew will have at its fingertips everything they need, and more. Meanwhile, the 900EX’s cabin—at 33 feet long and almost eight feet wide—gives you and your guests ample room to stretch out or move around.

In its long-range cruising mode, traveling at Mach 0.75, the Falcon 900EX can cover 5,179 land miles non-stop, or it can fly you and seven passengers from Stockholm to Amsterdam, then Paris, Rome, Istanbul, and finally to Moscow without refueling. The Falcon 900EX has a base price of $34.95 million.