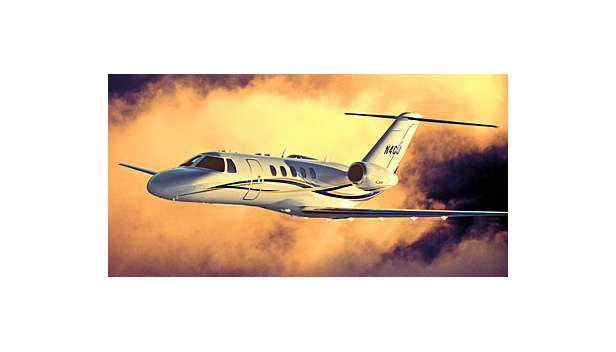 As the number in its alphanumerical designation indicates, the Cessna Citation CJ4 (800. 423.7762, www.cj4.cessna.com) represents an upgrade from the CJ3, its predecessor. The new plane, which Cessna announced that it would add to its lineup last October, will carry as many as eight passengers (two more than the CJ3), and the cabin will be almost two feet longer. Passengers will have more shoulder and leg room, and the redesigned windows will enhance sightseeing. The $8 million plane will achieve 500 mph and have a range of about 2,100 miles. Cessna expects to begin deliveries in 2010.

California-based Spectrum Aeronautical, launched in 2005 by veteran aircraft designer Linden Blue, plans to build its business jets with a proprietary carbon-graphite composite called fibeX. This strong, lightweight material theoretically will allow Spectrum jets to burn significantly less fuel than is required by comparable aircraft. The Spectrum Freedom S-40 (760.479.0822, www.spectrum.aero), the second plane in the company’s line, is much larger than the first, the Independence S-33, which is also in development. The Freedom’s 6-foot-tall cabin will have room for seven to nine passengers. The same brand-new, efficient GE-Honda turbine engines that power the HondaJet will drive the plane 2,500 miles at 500 mph. Spectrum expects to begin delivering the $6.2 million jet in 2010.

When the Canadian investment group Onex Corp. and Goldman Sachs partnered to purchase Raytheon Aircraft in March, they named the new entity Hawker Beechcraft Corp., a nod to the widespread respect held for Raytheon’s Hawker and Beechcraft plane lines. Now the company is following through on Raytheon’s plan to launch the Hawker Beechcraft Hawker 900XP (316.676.0800, www.hawkerbeechcraft.com), a midsize business jet that is designed for the long haul—say, flying coast-to-coast nonstop, or taking six people from New York to Honolulu with one intermediate stop. The $14 million jet retains the roomy cabin of the popular 850XP while boosting performance with new winglets and Honeywell engines. The extra efficiency stretches the plane’s maximum range by 13 percent. The 900XP will cruise at 536 mph and have a range of about 3,400 miles. Hawker Beechcraft says that it will begin delivering the plane later this year.