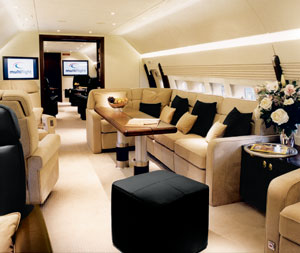 The megayacht of the skies takes flight.

When David Hood, chairman of Multiflight, a British company that sells, charters, and maintains aircraft, set out to create the ultimate private jet, the last thing he wanted was a conventional cabin. So he turned to an unconventional source: Andrew Winch, a yacht designer who had never worked on a private jet.

The two met when Hood was considering the purchase of a new yacht. However, the yacht was soon forgotten once Hood mentioned his acquisition of a Boeing Business Jet 2, an executive jet that has a range of more than 6,000 miles and cruises at 541 mph. Talk progressed to action, as Hood commissioned Winch to design a custom interior for the ultralong-range jet, which he would make available for charter as well as personal use. Germany’s Lufthansa Technik would then complete the cabin to Winch’s specifications. Winch, who has designed the interiors of megayachts such as Feadship’s 204-foot Cakewalk and Hakvoort’s 146-foot Campbell Bay, did not allow his inexperience with planes to limit his work. In fact, his lack of aviation expertise was an asset at times. “Andrew didn’t know the difficulties of doing things differently,” says Hood. “This is a good thing and a bad thing. Lufthansa Technik was initially quite challenged by his ideas, but they were excellent once they got started.”

The interior project, which Lufthansa Technik completed last June, cost $29 million (the price does not include the approximately $43 million base price of the BBJ2) and took about a year to complete. Winch’s greatest challenge was to create a cabin that could welcome numerous passengers—the plane can carry 19 and sleep 15—while retaining a light and airy atmosphere. “I wanted it to have a constructed, architectural feel,” he says. “I didn’t want it to be Hollywood. I wanted it to be an English plane.”

A wooden arch, which also holds magazine racks, divides the main cabin into two areas. Each saloon has armchairs clad in Connolly leather and sofas that curve gently to allow face-to-face conversations. Sight lines enable flight attendants to view both sections from the galley without having to intrude unnecessarily. The interior, hushed even during takeoff (a standard 737’s cabin is twice as noisy), appears as though it were built by artisans. For example, in one of the bathrooms, Winch designed grooves in the top and sides of limestone veneers to eliminate an unsightly join line.

The in-flight entertainment system is one of the most advanced mechanisms aboard any plane. Lufthansa Technik developed a new digital video system that eliminates interference lines on the plasma screens. At each seat, it also installed portable touchscreen remote controls that use wireless networking and Apple iPods. “I think it has understated elegance,” says Winch. “It takes a lot of work to make something this sophisticated that doesn’t look like it is just being clever.”

Over the past year, Hood has flown his jet on personal trips to New Zealand, Easter Island, and the islands of Tonga in the southwest Pacific, but this summer, the plane will be available for charter for the first time. Executive Jet Charter will operate charter flights for approximately $15,000 per hour. However, Hood might have a difficult time letting go of his jet. “When you are doing a flight you get quite comfortable, reading a book or watching a film,” he says. “Actually, it is quite a nuisance when the flight ends.”