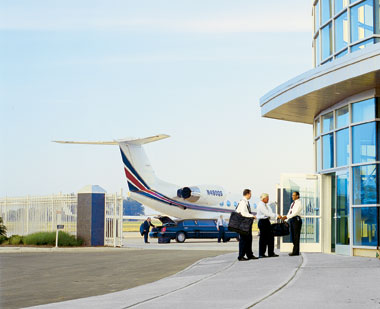 In tough times, the pioneer strengthens its lead.

Although there has been a slight rebound in fractional ownership that corresponds with the upswing in the stock market, the past year has not been the kindest for this segment of the private aviation market. Potential new clients are exploring other options such as 25-hour fractional programs or charter services, and existing clients who purchased their fractional shares at the market’s peak in the late 1990s are seeing the residual values of their aircraft ownership decrease significantly.

For NetJets, which has not been immune to these troubles, the current climate is not necessarily a bad thing. “Many people became aware that what seemed like a good buy was not a good buy,” says Kevin Russell, the company’s executive vice president. “We have hundreds of people waiting for buyouts from other providers. They want to apply that money to get into the NetJets program.”

As the economy continues to pull out of its latest plunge, Russell believes that NetJets, in the past year, has bolstered its standing as the leader in fractional ownership by offering superior safety and service, residual values that are higher than those of its competitors’ offerings, and its one-stop shop for private flight alternatives. Prospective clients who are not certain whether fractional ownership meets their needs have options—charter, 25 hours of fractional flight per year, or outright aircraft ownership—that NetJets also offers through Executive Jet Management and Marquis Jet, its partner in the 25-hour segment.

“We’re the largest fractional provider with over 70 percent in revenue market share,” Russell says. “We’re the largest card provider in conjunction with Marquis. We have been, over the past 30 years, the largest charter provider and largest aircraft management company, managing over 110 aircraft for people who wish to own their own aircraft.”

However, fractional ownership remains NetJets’ signature business. Russell says that the company’s insistence on safety—for example, NetJets pilots must have at least 2,500 hours of flight before applying for employment, and they must attend flight safety training twice a year after they are hired—has attracted new clients while retaining existing ones.

Perhaps the most significant current concern of fractional owners is the value of their shares, which can—depending on the provider, the date of purchase, and the aircraft type—sink to as low as 60 percent of their original worth. Russell says that existing shares in the NetJets program suffer less depreciation than those in other programs because of the quality of the aircraft in the company’s fleet, which includes the Cessna Citation Excel, Gulfstream IV, and Raytheon Hawker 800XP. “The 13 different aircraft we buy are the most desirable aircraft in the world and have the best residual value in the world,” he says. “Those values are determined by how reliable they are, their safety record, and how well maintained they are.”

Despite the downturn in fractional ownership, one positive has emerged: a much savvier client. Russell believes that such wise buyers will turn to NetJets. “I understand that I didn’t choose wisely initially,” Russell says, speaking as if he were an owner of a depressed share. “I’ve learned a lot from that. I want to choose the alternative the second time around, and it’s not going to disappoint me. I’m a far more educated buyer today than years ago.”

Flight Options has added a large-cabin aircraft to its fleet, giving clients 10 plane models from which to choose. The Legacy, a 13-passenger jet built by Brazilian manufacturer Embraer, boasts a top speed of 518 mph, features 240 cubic feet of luggage space, and has a range of 3,565 miles—enough for a cross-country flight.

Although undoubtedly eager to introduce fractional owners to its newly acquired planes, Flight Options insists that it selects the aircraft that best suit its travel itineraries. “One of the greatest things we do as a company is that we sit down and do a needs assessment,” says Rich Heckman, an adviser to Flight Options. “We look at where people are flying and their typical mission. We have the ability to bundle some of our products together, which will make them more justifiable and more affordable.”

One of the most daunting obstacles to fractional ownership is the amount of up-front capital required to purchase an aircraft share. In March, Flexjet introduced an alternative form of payment with its Jet Rich Quick program: Clients can now pay monthly fees. Costs range from approximately $4,600 per month over a four-year period for a one-sixteenth (50 annual hours) share in a Learjet 45 to $12,000 per month over a two-year term for the same share of a Challenger 604. Monthly payments are based on the purchase price of the share plus assorted fees divided by the number of months in the term. Of course, Flexjet still offers its traditional five-year shares of aircraft in its fleet of Bombardier planes.

Although CitationShares is capable of providing fractional service to and from locations throughout the country, its focus remains on shorter flights. CitationShares has three aircraft choices in its fleet: Cessna’s Citation CJ1, Bravo, and Excel. These are small and midsize planes designed for regional trips, which are exactly what many of the company’s clients are flying. “CitationShares is a smaller company but giving people a run for their money,” says Steve Maloney, president and COO of Aviation Management Systems, the aviation consulting firm. “They’re limited in choice of product, but they’re doing an outstanding job. Those guys get it.”

The limited choice enables CitationShares to keep its expenses down and pass this savings to its clients. Also, the three plane models in the CitationShares fleet are relatively inexpensive to fly, thereby reducing the company’s hourly operating costs.