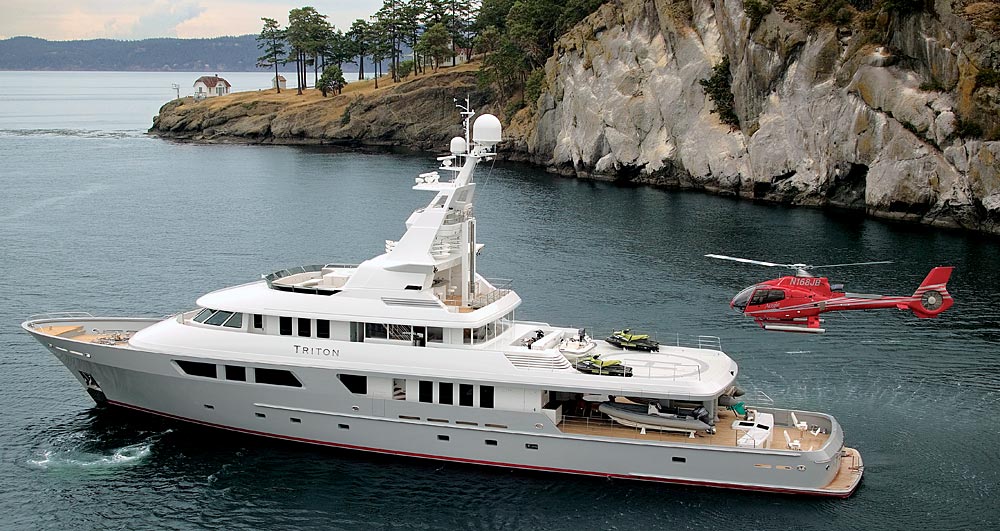 Like most aviation consultants, James Wakeford tells lots of stories about things that have gone wrong. He recalls a certain yacht crew that never properly flushed the onboard helicopter’s engines of corrosive salt water during three months at sea, something they should have been doing daily: “We had to tell the captain that they had basically invalidated the warranty of a multimillion-dollar aircraft.”

He also tells a story—without using names—of a yacht owner who insisted on buying a tiny single-engine Robinson R44, even though this gentleman weighed close to 300 pounds. “We had to say to him, ‘If you’re ever going to fly with luggage, you’re going to need something bigger.’”

Wakeford is a pilot and one of the directors of Aeronautic Consultancy, a French firm that helps yacht owners find and purchase helicopters for their vessels. The cautionary tale he tells more than any other involves a yacht designer who calls only after completing his plans and asks Wakeford to find a specific helicopter for a vessel that, as it turns out, is too small to carry it, or that has such a poorly placed helipad that no pilot could land on it. “We’re constantly getting calls from designers wanting a helicopter when the design itself won’t work,” Wakeford says. “I say to the owner, ‘Let me draw you something to scale. Have your designer work around this.’ ”

Rule number one for yacht owners who plan to fly helicopters to and from their vessels is that the specialist who will be selecting and purchasing the helicopter must be involved in the ship’s design. “If they call us early enough, we save these yacht designers a fortune and make sure they deliver what the owner wants,” says Kev Mathieson, a director of Helidecks Training Solutions in Cornwall, England. “The really good designers always want to talk to a helicopter consultant right away because they know we can help them avoid mistakes.”

The other reason to include a helicopter specialist in the design process is to ensure that the plans conform to standards mandated by the U.K.’s Maritime and Coast Guard Agency. Known as the LY2 standards, these rules apply to ships registered in the United Kingdom, the Cayman Islands, the Isle of Man, Bermuda, and Gibraltar—but only for those used in charter operations. Although these regulations do not apply to private vessels, they are the highest standards of safety with regard to ship design and the design and inspection of helipads on ships, also known as helidecks. “I have an owner who doesn’t want to use his boat for charter, but he’s still building to the LY2 standard. If he wants to sell it someday, he can enhance its resale value if it fits this code,” Wakeford explains.

Finally, a yacht owner who selects a specific helicopter prior to designing and building a vessel has a better chance of securing a delivery position that coincides with the yacht’s completion date. The helicopter market is going the way of the fixed-wing market: There are currently many more buyers than there are new helicopters for sale. The best manufacturers have waiting lists of up to three years. Putting down a deposit to secure the future delivery of a helicopter is a prudent investment for anyone who wants an aircraft sitting on the deck on launch day.

While helicopters may seem capable of landing on a postage stamp, in reality they require quite a bit of room in which to maneuver. The smallest helicopter that works well in a maritime environment, the Robinson R44, is 38 feet, 3 inches long; one of the largest, a Sikorsky S-76, measures 52 feet, 6 inches. To accommodate these and other rotary aircraft, a helideck must have a diameter equal to the length of the helicopter. In addition, crew members must be able to walk around the helicopter easily to tie it down and to perform onboard maintenance. Refueling tanks and fueling equipment must be aboard. There must also be extra firefighting equipment and special lighting and navigational aids, all of which take up considerable space.

Many helidecks can be used as sundecks, but only if the vessel has an onboard hangar for storage. An owner who does not relish lounging in the sun next to a multiton rotary aircraft will want such a space.

“A hangar, especially during a transatlantic cruise, is a fantastic luxury,” says James Frean, director of the Fort Lauderdale, Fla., office of HeliRiviera, a consulting firm that advises yacht owners on helicopter purchases. Onboard hangars not only free up deck space, but also protect the helicopter from corrosive salt air. Mathieson notes, however, that hangars take up a tremendous amount of room. “A hangar would crowd the inside of any yacht smaller than 300 feet,” he says.

How a yacht owner plans to use a helicopter influences his or her choice of aircraft. For example, certain people just want to do some island-hopping or sightseeing on pleasant days. For these individuals, a smaller, lighter helicopter with a shorter range will suffice. Others may need to fly more than 150 miles in varying weather conditions, day or night, to attend impromptu meetings. This will require a hardier model of aircraft, with the right navigational aids and a more experienced pilot.

Where power is concerned, European owners typically prefer twin engines, while U.S. owners often rely upon single-engine aircraft. The European perspective is simple: If an engine goes out over the ocean, a single-engine aircraft must crash, while a twin-engine generally can limp back to land. Yet Americans put their faith more readily in technology, as Frean notes. “A well-maintained helicopter is very reliable,” he says. “If something goes wrong, it’s usually pilot error and not a mechanical breakdown.” He and many other European consultants, however, argue in favor of flexibility and practicality. “An owner might come to us and want a single engine, and we tell him that for a million dollars more, you can get a twin engine, ” Frean says. “There are many weather and wind conditions in which a single engine cannot take off. After paying all this money for a yacht with a helideck, you don’t want to be stuck on board.”

If he cannot persuade these hesitant individuals, he advises them to at least design their helidecks to accommodate twin-engine aircraft, whether they buy them or not. “When you find out they are not happy with [the smaller helicopter],” he tells them, “you can upgrade to a heavier, larger, twin-engine model without modifying the yacht.”