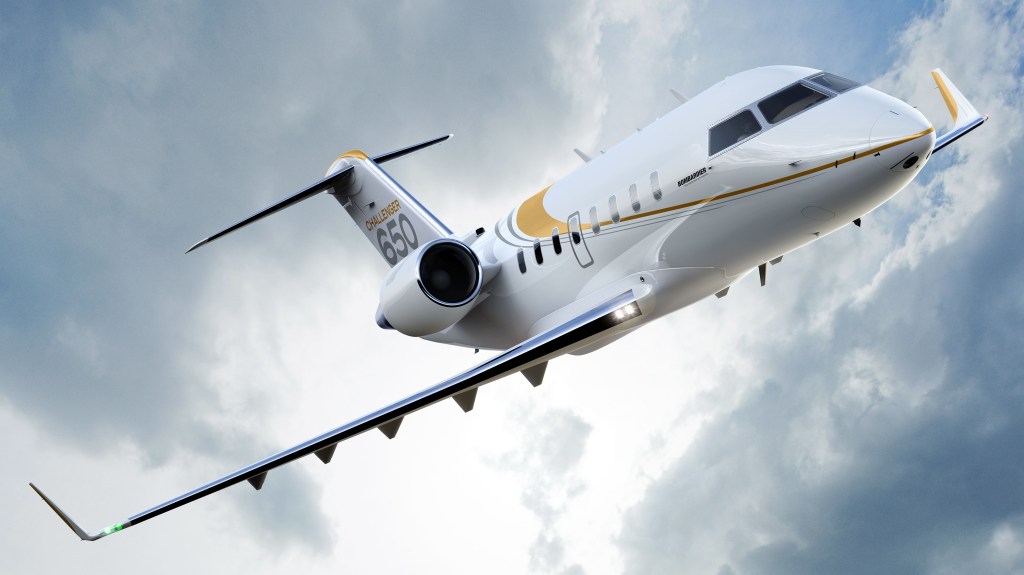 While in town for an event, the Bombardier media team took a few hours out of their busy schedule to take some journalists up in the Challenger 650 large-cabin business jet. Because I hadn’t been on a private aircraft in almost 10 years and had just taken over Robb Report’s aviation category, I jumped at the opportunity to spend a few hours in the air. We all met at the Clay Lacy FBO at Van Nuys Airport near Los Angeles. As I drove there, the news on the radio reported a windy, windy day in store for Southern California. I began to wonder if we would be able to take flight as planned.

But it proved to be a smooth ride. “A smooth ride is an integral part of the Bombardier design philosophy,” said Dominique Cristall, our host and Bombardier’s communications, sustainability, and community-affairs advisor.

Bombardier sales engineer Anne-Elisabeth Dutil was onboard to explain technical questions. “Shorter wings clip through the air for a smoother ride,” she explained. So true. Apparently, this is a feature that Bombardier touts on all its aircraft—a special wing design for a comfortable flight.

Our ride lapped Las Vegas, soaring over the Grand Canyon and Hoover Dam. During the flight, we poked and pressed and played with the tables that popped out of the cabin walls; they sat flush with the side so nothing falls in and turned the seating spaces into comfortable dining areas. We explored the entertainment system with controls present at every seat, and we used the Ka Band–powered Wi-Fi to upload photos to social media and email our coworkers back at the office. The short flight allowed us time for lunch, prepared by the Bombardier flight attendant in the galley behind a beautifully finished and electronically controlled closed door.

While we were lounging around in the cabin, feeling like schoolkids playing hooky, Cristall pointed out the hand stitching and metal inserts on the leather seats and the absence of visible speakers in the cabins walls. Then she taught us how to recline and swivel our seats. Dutil explained how the cushions were built for the divan and expounded on the mobile app that controls the Bluetooth-enabled cabin environment and entertainment system. We got the whole scoop on how each component is hand-built at Bombardier’s facility in Montreal.

After lunch, we had a Champagne toast to celebrate a smooth flight and good company, and then we cranked up the immersive-sound stereo system, with the speakers housed inside the leather walls. On the brink of a mid-afternoon dance party, all I could picture were the penguins flying around in the animated movie Madagascar—booming stereo and silly shenanigans on the inside, quiet private jet flying serenely on the outside. But I assure you, this was no rigged airplane like in the movie. This was a state-of-the-art, well-thought-out, handcrafted, and well-tuned business jet with a proven track record, more than 5 million flight hours, and multiple system redundancies. Approximately 1,700 Challenger aircraft have been delivered to date.

“The Challenger 650 aircraft entered service in 2015,” Cristall told me. With a top speed of 647 mph and a cruise speed of 609 mph, it carries 12 passengers, two pilots, and one flight attendant a total of 4,600 miles in a cabin that Bombardier touts as the widest in its class.

Guests will find four facing, swiveling leather club seats that also recline in the forward section of the aircraft. Beyond are four more facing seats and a four-seat divan, which all make up the conference area and feature a pop-up table in the middle. The forward seating and divan configurations can also convert into beds for long flights.

The lavatory is well-sized and easy to move around in—and it includes a solid door! Guests have full access to luggage storage, which is just beyond the lavatory. This is helpful for cleaning up and changing clothes after a long flight; the Challenger 650 can fly from Los Angeles to Honolulu or Dubai to London nonstop. The plane earned a steep-approach certification, meaning it can land in hard-to-reach airports. The Bombardier Vision flight deck is included and features synthetic vision and MultiScan weather radar. The Challenger 650 business jet provides comfort, safety, and convenience in a well-proven package. The base price is $32,350,000.