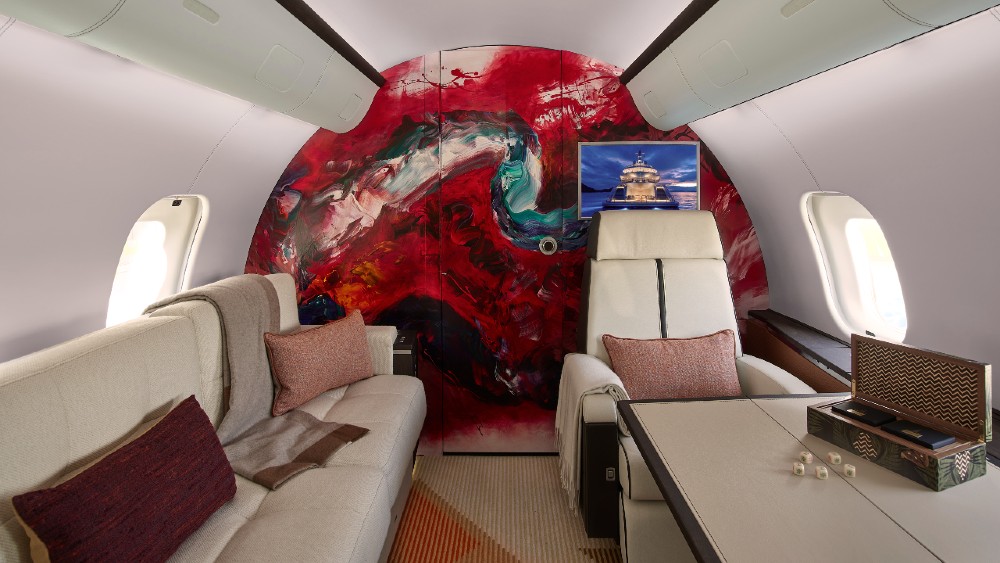 The owner of a Bombardier Global 5000 decided to brighten up the 10-year-old staid, corporate interior of his jet with more than a splash of color. Instead, he went for the nuclear option of primary colors that more than faintly resembles a painting by Japanese artist Kazuo Shiraga. But the resemblance is more than passing because the jet’s owner also has that Shiraga painting hanging in his home.

“The painting in the jet was created as a direct inspiration from one of his pieces,” Jim Dixon, Winch Design’s managing partner and creative director of yachts and aviation, told Robb Report. “Of course, you couldn’t install a piece like that on board an aircraft. There isn’t the real estate.” Especially considering it occupies the entire central area that separates the forward part of the jet from the owner’s personal area in the rear.

London-based Winch had recently completed another interior refit project aboard the unnamed owner’s yacht, who then felt like his jet needed a serious update. “It had dark seats and dark wood veneer, so we wanted to freshen it up,” says Dixon.

Besides the mural, the designers also lightened the veneers, leathers and even the carpeting, while also adding subtle, diagonal patterns across the interior that held everything together. Beyond the big splash of color, Dixon said the team “didn’t want to go overboard” with the rest of the interior. “It’s clearly the centerpiece,” he says.

The process was much more involved than hiring an artist to paint on a door. Winch had to submit all the paints and other materials for certification through European aviation authorities, while Bombardier UK took the jet’s interior apart piece by piece, and then shipped those pieces to AeroVisto’s completions facility in Switzerland.

AeroVisto then did the interior refit. “It took a lot of logistical jiggling with some technical challenges to complete the project,” says Dixon.

When the section that would hold the mural was ready, it was shipped back to the UK where the artist painted it over a six-week period. The result was the dramatic change in a space that the owner had become used to flying.

“Many owners become accustomed to flying in a standard corporate business jet,” says Dixon, “but some eventually want something that expresses their individuality. We really enjoy those projects.”

Want to Fly Like Maverick? These Flight Schools Will Help You Live Out Your ‘Top Gun’ Fighter Jet Fantasies