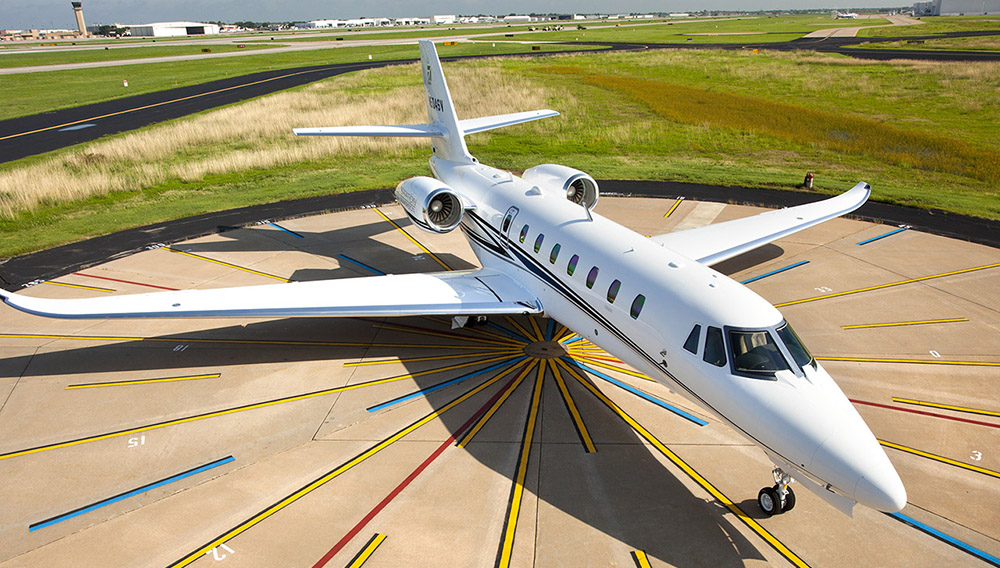 Cessna Aircraft has been busy so far this year working on a number of upgrades and adding new models in its jet fleet. The Wichita, Kan.–based manufacturer has also been working to integrate the Beechcraft Corporation, a former competitor producing the Hawker and Beechcraft model lines, which was purchased in March by Cessna’s parent company, Textron.

In March, Cessna introduced the Citation CJ3+, a new version of its CJ3 single-pilot jet, with upgraded Garmin G3000 touchscreen avionics and improved turbulence-detecting radar for a smoother ride. New interior designs are offered for both the cabin and cockpit, and an improved pressurization system helps both passengers and crew feel less fatigued. The $8 million jet also will offer enhanced connectivity, with boosted Wi-Fi and high-speed Internet capabilities. The CJ3+ will have a cruise speed of 478 mph, a range of 2,382 miles, and seating for as many as nine passengers. Deliveries of the new model are expected to start by the end of the year.

Also in March, Cessna announced an upgrade available for its Citation CJ2+ jet, called the Alpine Edition. This package of modifications includes the new Garmin G3000 avionics and new pressurization and diagnostic systems. The upgrade—which is available only as a retrofit, not on new jets—also offers optional new exterior paint schemes and interior designs. Upgrading a CJ2+ to the Alpine Edition will take about 10 weeks and at least $900,000, says Cessna, and the required certification to make the changes should be ready by mid-year. The single-pilot jet seats up to eight passengers and can fly up to 2,014 miles at speeds up to 481 knots.

In December, Cessna started deliveries of its highly anticipated Citation M2, designed to be a step up from the entry-level Mustang, with more speed and a bigger cabin. The single-pilot jet can carry up to seven passengers, can fly as fast 464 mph, and has a range of 1,782 miles. The jet, which starts at $4.5 million, is based on an earlier CJ model but had a thorough makeover to fit its new role in the Citation line.

December also saw the first deliveries of the Sovereign+ midsize business jet, with new winglets, a Garmin G5000 avionics panel, and auto-throttles. The aerodynamic boost from the winglets plus efficient new engines from Pratt and Whitney Canada extend the new model’s range by about 260 miles, to 2,668 miles at its long-range cruise speed; it’s maximum cruise speed is 529 mph. The jet has a base price of $17.9 million.

The newest upgrade to Cessna’s popular midsize Citation X, with a longer cabin and more range, is expected to start deliveries this summer. The Citation X+, with a top speed of Mach 0.935 (or 617 mph), will recapture the position of fastest civilian jet from the Gulfstream G650. Prices for the new Citation X start at about $23 million.

Cessna continues work on its two all-new jets, the midsize Latitude and super-midsize Longitude. The Latitude flew for the first time in February; its nine-passenger cabin, Cessna’s widest yet, has 6 feet of headroom and a flat floor. First deliveries are on track for mid-2015, at a price of $16.25 million. The $26 million Longitude is still in the design stage, with no timeline set for production.

Textron closed on its acquisition of the bankrupt Beechcraft in March, and said it will bring the company together with Cessna in a new segment called Textron Aviation. The new company will not return Beechcraft’s Hawker jet line to production, but will maintain the existing fleet. Cessna officials hope to bring those owners into the Cessna stable when they are ready to upgrade. Textron has said it will continue to produce Beechcraft models. (www.cessna.com)