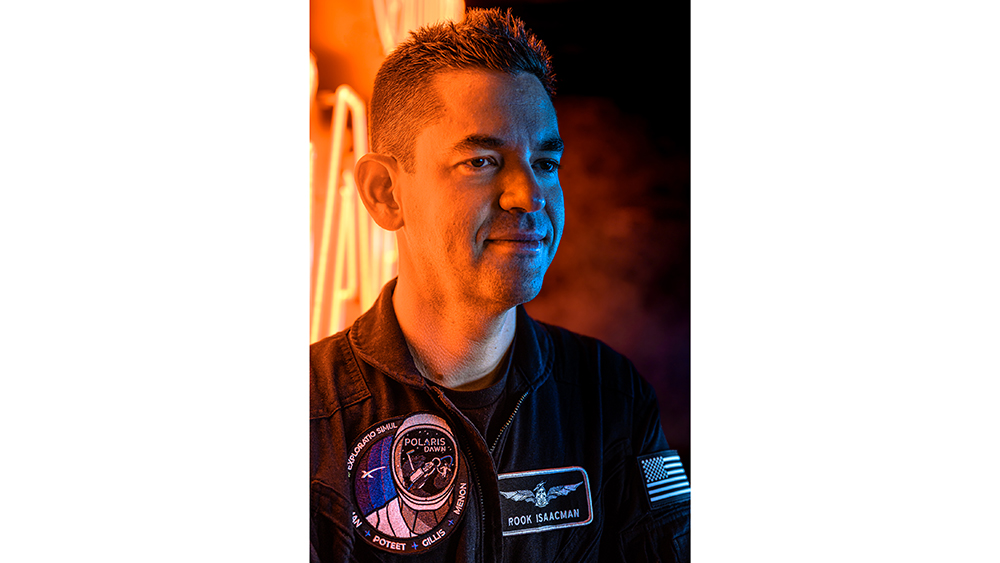 Ever since Jared Isaacman attended the Aviation Challenge summer camp at age 12, his goal was to fly—fast. The New Jersey native, 39, is founder and CEO of Shift4; in 2020, his company’s IPO made him a billionaire, but he’d become a serious pilot long before then. He earned his pilot’s license in 2005, at age 22, and just four years later—after moving through single- and multi-engine instrument ratings to jets—Isaacman broke the round-the-world speed record in a Citation CJ2. Attaining an “experimental type” rating allowed him to pilot L-39 Albatros and A-4 Skyhawk fighter jets and ultimately to form an aerobatic squadron—think Thunderbirds or Blue Angels—called the Black Diamond Jet Team. Composed of Isaacman and six other pilots, the group flew more than 100 air shows between 2011 and 2014. “We flew seven fighter jets, 18 inches apart, doing formation loops, rolls and other maneuvers,” he says. “The team included former USAF Thunderbirds and civilians like myself. It was a great brotherhood.”

Isaacman cofounded Draken International in late 2011 and built it into the world’s largest private air force, with more than 100 fighter jets used to train pilots from all the main US military branches. Isaacman’s favorite: “The A-4N Skyhawk, which is basically the ‘bad-guy’ jet that Viper and Jester flew in the original Top Gun.”

But his latest obsession is space. Last year he funded the first all-civilian orbital mission, a three-day trip using SpaceX Falcon 9 rockets for transport. Isaacman and his Inspiration4 crew raised over $240 million for St. Jude Children’s Research Hospital, in Memphis, including $100 million from Isaacman himself. Next: Polaris Dawn, a new, five-day mission scheduled to lift off later this year. We caught up with the record-breaking civilian astronaut to talk mission prep and the future of citizen space travel.

Did you really ever expect to get to space as a civilian astronaut?

My passion for aviation and seeking out the most demanding and challenging flying I can do is in part because I did want to be an astronaut, starting when I was in kindergarten. But I did think that flying fighter jets and air shows would be as good as it got—I never imagined I would have a chance to lead a mission to orbit.

How will Polaris Dawn be different from Inspiration4?

With Inspiration4, I initially had no idea I would lead the first civilian mission to orbit Earth. The idea came together in a matter of weeks. Once I knew it was a “first,” I took the responsibility seriously. We assembled a strong crew and had meaningful objectives in space alongside what we wanted to accomplish here on Earth…

We wanted to show how nongovernment astronauts could be happy, healthy and productive in space. If Inspiration4 was successful, we knew it would open the door to more interesting missions. Now that the door is open, there’s a lot for us to build in space to truly open up this frontier. Polaris is a series of technically demanding developmental missions that will conclude with the first flight of the brand-new launch vehicle Starship.

With Polaris Dawn, we’ll fly higher than any human being has gone since we last walked on the moon—the highest Earth orbit ever flown. We’ll also test the first new spacesuit designed in 50 years with an EVA [extra vehicular activity, aka a space walk], as well as new operation protocols for pre-breathing [astronauts breathe pure oxygen before a space walk to avoid decompression sickness] and deploying cube satellites [miniature satellites used for remote sensing and telecommunications]. Finally, we’ll communicate over a new constellation of laser-based Starlink satellites [being tested to ensure viability for outer-space communications]. Those will be key to long-range spaceflight.

How did you choose the crew?

The Polaris missions involve a lot more risk than Inspiration4, so the crew needed to meet the mission objectives. Polaris is a joint program with SpaceX, so we assembled two talented engineers at SpaceX that we knew from Inspiration4: Sarah Gillis, the SpaceX lead astronaut trainer, and Anna Menon, a SpaceX managing engineer and mission director of mission control who previously worked as a biomedical operator at NASA. We also have Scott “Kidd” Poteet, who I flew with for over a decade and who worked previously at Draken. He served as the mission director for Inspiration4.

Are there other missions planned after Polaris Dawn?

Polaris II’s objectives will be designed based on what we learn from Polaris Dawn and the un-crewed test flights of Starship. Polaris III will be the first crewed flight of Starship and the super-heavy booster. This vehicle is bigger and more powerful than the Saturn V rocket that put human beings on the moon a half century ago. We will test-fly it, and if successful, Starship will be the vehicle that will return human beings to the moon and ultimately bring the first humans to Mars. Starship could someday be the 737 of human spaceflight.