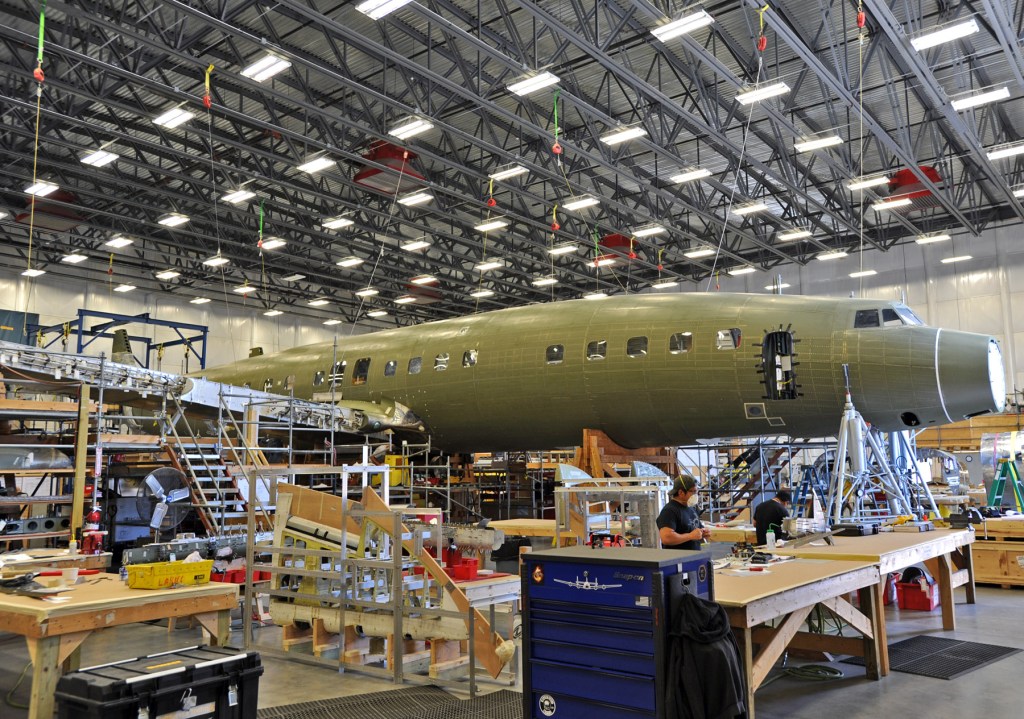 Talk about a reversal of fortunes.

In the final chapter of a long-running vintage aircraft saga, it was revealed last week that Lufthansa paid $163 million to restore a 1958 Lockheed Constellation Starliner, Star of the Tigris, into mint flying condition, only to jettison the project after ten years of restoration work. It now sits in pieces in an unheated warehouse in Bremen.

At the other end of the surprise-ending spectrum, “Connie,” a second Starliner that the German airline purchased only for parts to rebuild Star of Tigris, has become a trendy, showpiece lounge outside the TWA Hotel at New York City’s JFK airport.

The German aviation industry website Aerotelgraph last week reported that Lutfhansa CEO Carsten Spohr said at a general meeting that the airline spent $163 million (150 million euros) in the attempt to restore Star of the Tigris so she would not only be able to fly again, but serve as a passenger carrier. Spohr said the expense of the 10-year project was largely covered by donors and sponsors.

Last of the Lockheed Constellation series, the Starliner symbolized the golden age of flight.  Wikipedia

Introduced in 1956, the Lockheed Constellation Starliner L-1649A had glitzy, on-board lounges with original artwork, with first class-sections in the front and rear sections. It was considered state of the art in amenities and technology. “The Constellation represented the ultimate in airline performance and luxury during the 1950’s,” wrote Ralph Pettersen on his website, which covers the remaining Constellation aircraft around the world.

Besides TWA, Air France and PanAm, Lufthansa became a believer in the Starliner, acquiring four in the 1950s, and renaming them Super Starliners. “Lufthansa used them to fly transatlantic and they were considered the ultimate in luxury,” Pettersen told Robb Report. “They only carried 40 passengers for what they called Senatorial service.”

Its reign was short-lived. Lockheed built only 44 Starliners during a four-year period. By 1960, jets had displaced the prop-driven aircraft as the kings of transatlantic travel, offering better range at faster speeds.

Over the next three decades, the remaining Starliners only survived by hauling freight, though most ended up rusting in airplane graveyards. Maurice Roundy, who understood the historic value of the last Constellations, rescued three and parked them near his home at the Lewiston-Auburn airport in Maine. Roundy didn’t have the finances to restore them, so they ended up sitting and rusting on the tarmac for years, until proceeding to a bankruptcy auction in 2007.

The Star of the Tigris sat on the side of the airport in Lewiston, Maine, after being rescued. But it waited for another decade for a restorer with deep pockets.  RM Pettersen

At that point, Lufthansa swooped in and bought them. Fifty years after carrying her first passengers, Star of the Tigris was considered the most viable of the three for the Lufthansa restoration.

Bernhard Conrad, a retired chief technology officer at Lufthansa, was behind the purchase of the Starliners, according to Airspacemag.com. Conrad figured that the charitable foundation of Lufthansa could purchase the Starliners, restoring Star of the Tigris by using the other two planes for parts.

Lufthansa didn’t want to just get Star of the Tigris flying again, but planned to recreate the glamour days of air travel. It would combine a stylized, 1950s-period interior with up-to-date safety features that would allow it to carry passengers. An ambitious undertaking that required deep pockets, the restoration instantly became a cause for celebration among classic aircraft lovers around the world.

The restoration began in 2008 in a hangar at the Lewiston airport. In 2016, one of the Lufthansa engineers overseeing the restoration told Airspacemag.com that many parts were corroded, so they had to manufacture original parts, and fashion new bulkheads. The restoration project was scheduled to take two to three years, but eight years later, dozens of mechanics were still working on the project for 60 hours per week.

Conrad said in 2016 that he hoped Star of the Tigris would be ready for test flights by the end of 2018. “The airplane will be fully certified to the transport aircraft category,” he told Airspacemag. “It’s not an experimental.”

This Lockheed Starliner has become a trendy lounge as part of the TWA Hotel at JFK Airport.  Adobe

In 2018, without warning, the restoration work on Star of the Tigris stopped. The plane, which was nearly ready for flight, was taken apart, including its single-piece wings, and shipped to Germany. Lufthansa has not given many details about its eventual fate, but said that it would end up in an aviation museum, rather than flying. Lufthansa did not reply to requests for comment.

The sudden stoppage of the project, which many believed was so close to flight, disappointed not only the mechanics and engineers on the project, but also aircraft aficionados who wanted to see a Constellation flying in all its glory again. “They went nuts,” says Pettersen.

The common opinion was that it was a purely financial decision. The project had already gone way past its estimated two- to three-year time frame, and it was unclear whether it would ever be a viably commercial aircraft.

Unlike Star of the Tigris, which was being restored to historical exactness, the cocktail lounge inside Connie at the TWA Hotel uses a simple, retro motif of the glamor days of flight.  Eric Laignel

“Lufthansa did everything first class—everything was going to be better than new,” says Pettersen. “I heard estimates that 95 percent of the sheet-metal skin was replaced and 80 percent of the structure was replaced. They reconditioned six engines and redid the props. It was an amazing project, but it got out of control.”

The pricetag of $163 million for the restoration work is probably low, adds Pettersen, who was invited by Lufthansa to the project’s ribbon-cutting in Auburn in 2008. “For quite a while they had upwards of 100 people working at the Auburn hangar, seven days a week,” he says. “They also were overhauling props, engines and other components at subcontractors, all at aerospace industry rates.”

Connie, the Starliner destined for spare parts, will probably gain more admirers than the Star of Tigris. Like the other Starliners, Connie’s life ferrying the rich and famous across the Atlantic was short-lived, grounded by the Boeing 707, which was 300 mph faster. In 1961, Connie was converted into a cargo plane, and for the next 20 years, her fortunes dwindled. By 1981, she was running marijuana between Colombia and Arizona. She was abandoned in Honduras in 1983. Shortly after, Roundy rescued her and flew her to Maine.

Of the original 44 Starliners built by Lockheed, only four remain. Star of the Tigris is in Germany, Connie is in New York, a third is in Florida and the fourth is in South Africa.  Adobe

In 2018, Connie was restored to non-flight glory, with historically accurate but non-working motors and propellers, and then shipped with wings and fuselage to New York City, where she was paraded through Times Square before being set up as a trendy lounge near JFK’s Terminal 5 at the TWA Hotel.

Connie’s interior cocktail lounge is a modern look back at the glamor of 1960s flight by designer Stonehill Taylor. The designers maximized the inner shape by including a one-foot-wide backlit reveal that shows the raw bones of the aircraft. The interior matches the retro look of the adjacent TWA Hotel lobby, also by Stonehill Taylor, but originally designed by noted architect Eero Saarinen in the 1950s.

Star of the Tigris will hopefully have a similar fate, though it would most likely be in an aircraft museum in Germany. “I believe the best outcome would be the aircraft being made into a nice static display,” says Pettersen.