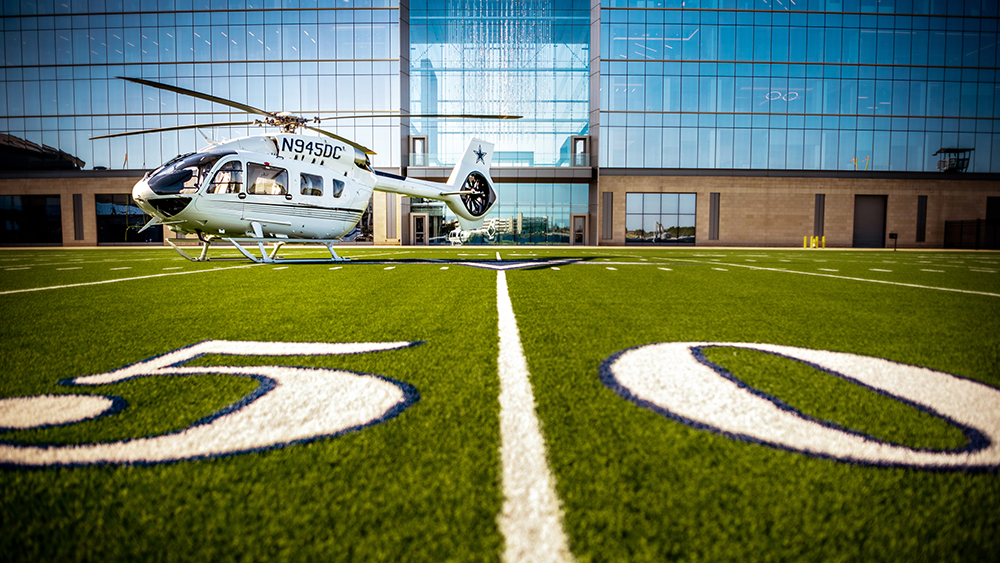 Jerry Jones may have revolutionized the business of professional football with lucrative television contracts and state-of-the-art stadiums, but even he didn’t anticipate the impact his Airbus Corporate Helicopter would have on the Dallas Cowboys’ brand.

“We originally got the ACH145 for transportation,” Jones says, referring to it as “DC-1,” though its official air-traffic-control sign is Bluestar One. “We wanted to commute between the Star, our headquarters in Frisco, and the stadium in Arlington, but it also had to get us to our other businesses.”

The logistical advantages were immediately obvious: The commute from the Star’s practice field to AT&T Stadium dropped from a one-hour drive to a 13-minute flight. The helicopter’s 400-mile range reaches remote areas of Texas (where Jones has other business interests) and since DC-1 can land anywhere, the 145-mph cruise speed is more efficient than a small airplane.

But it has been the promotional benefits that most caught the Cowboys’ owner by surprise. According to Jones, flying the Airbus over metro Dallas is the best billboard imaginable for the $5.8 billion sports franchise. “It lends an aura to the Cowboys, whether we’re circling the stadium and landing in the parking lot on game day or carrying business associates and sponsors,” Jones says. What he underestimated, he says, “is just how interesting the helicopter is for our fans. It gets their attention and keeps them thinking about us.”

Team colors—navy blue, metallic silver, royal blue and white—make up the custom interior, but the palette is muted. “We’re not about checkered tablecloths and sawdust floors,” Jones says. Instead, the team wants to project “a modern, urban-cowboy image. There’s no question the helicopter relays that cutting-edge look.”

The helicopter has seating for up to 10, though the layout can be reconfigured by mission. A custom, carbon-fiber chest serves as the onboard liquor cabinet, with phone-charging ports and Bose headsets for each leather seat. Enhanced soundproofing allows for conversations that would be challenging on most other helicopters. Having spent so much time aboard DC-1, Jones feels at home in the cabin. “It’s like getting into one of my cars,” he says.

The helicopter also serves as an air shuttle for Jones and his family, both for business and for trips to the family ranch. It’s also an impressive way to travel with the team’s sponsors, other executives Jones does business with, and sports greats like former Cowboys’ quarterback Tony Romo and tight end Jason Witten. In March, retired major general Patrick Brady, a former US Army helicopter pilot and Medal of Honor recipient who evacuated 5,000 wounded from battlefields in Vietnam, took the controls. “That flight was particularly meaningful for me,” says Jones, whose family has a long association with the National Medal of Honor Museum.

Friday nights were equally as significant for Jones and his wife, Eugenia “Gene” Jones, when the pair would land outside high-school fields in the Dallas metro area, after coordinating the flights with local authorities, to watch their grandsons play football. “It would’ve been impossible to make those games without that helicopter,” says Jones.

Safety was always a priority. DC-1’s all-glass cockpit, with Helionix avionics, is intuitive and lessens pilot workload, and its Helicopter Terrain Awareness and Warning System is designed for in-flight obstacle avoidance. The copter, with two Safran Arriel 2E turboshaft engines, is also designed for single-engine flight. “It’s a very capable system,” says Will Fulton, head of marketing for Airbus Helicopters of North America, who notes the Cowboys “spared no expense” in choosing every available safety option.

The executive helicopter has shortened Jones’s commute from an hour’s drive to a 13-minute flight.  Jeremiah Jhass

But DC-1 is also about brand building. “America’s Team” can still lay claim to the title of world’s most valuable sports franchise, despite not having won a Super Bowl since 1996. Jones understands DC-1’s entertainment value, but the Airbus just as often transports Jones and his players to local airports outside Dallas to attend Salvation Army fundraisers and other events. “Many times those people aren’t football fans, but if we’re active in those areas, there’s a good chance they’ll tune in to watch the game on Thanksgiving Day,” Jones says. “They’ll have more affinity for the brand.”

For a man known for his colorful talk, the billionaire is downright reverent when talking about the brand-building bonus of his helicopter.

“I’m being facetious, but I’m also half-serious here,” he says. “I’d like to take it and land it on every road in Texas. Or maybe have five, landing in every community across the US. It’s a real attention magnet.”