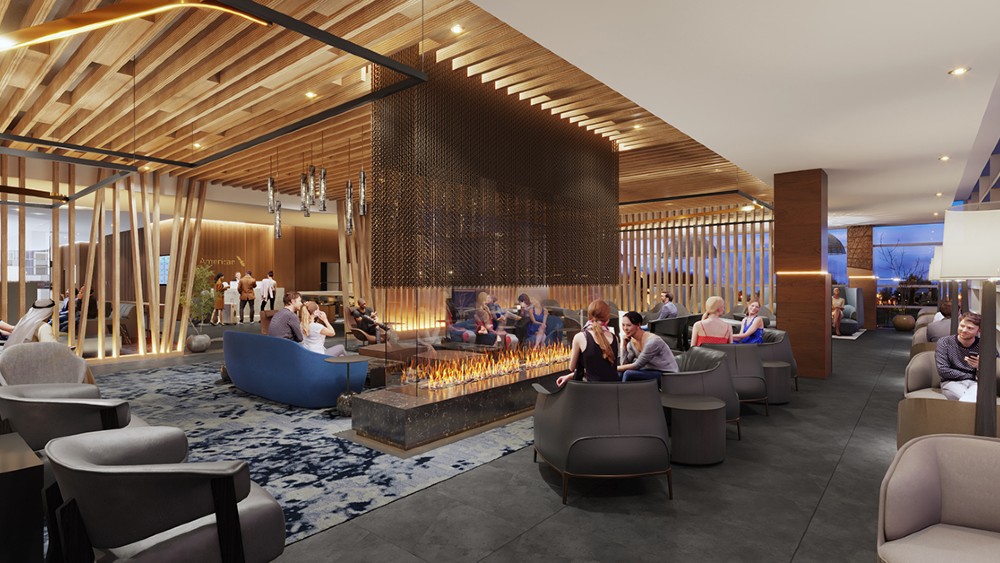 American and Delta Airlines are revamping members clubs at major hubs as part of a refresh for their frequent-flyer lounges. But instead of using a standard corporate layout, the updates will each have custom looks with local reference points. The designs will also add touches of luxury to the facilities as they go head to head not only with each other, but with some of the largest and finest first-class lounges in Europe and the Middle East.

Delta’s recent opening of its Sky Club at Tokyo’s Haneda Airport is a good example. The 9,000-sq. ft. lounge has a noodle bar and buffet, with artwork and interiors that are reflective of traditional Japanese patterns. The lounge also offers a glimpse of Mount Fuji in the distance. The airline has also opened the new Sky Club at LaGuardia airport in June. The 35,000-sq. ft. facility will be the largest in its network after completion. The design theme is New York City at the turn of the 20th century, with curated artwork on the walls, two bars, a kitchen, two food buffets and seating for nearly 600.

The design team used the US Capitol dome as a template for three domes inside America’s new Admirals Club at Ronald Reagan Airport.  Courtesy American Airlines

American Airlines has announced a redesign of its Admirals Club lounges across multiple locations. The first will be a revamped space at Ronald Reagan National Airport in Washington, D.C., this autumn. Chicago-based DMAC Architecture and Interiors used local influences for the new lounge, while also employing colors and motifs to reduce the stress of air travel.

“There’s a real push for wellness and sustainability that we are seeing from corporate clients,” Dwayne MacEwen, founder and principle at DMAC, told Robb Report. “We also got the message from several focus groups that the value of time is something you can never get back, so you really want to enjoy your experience. We kept that in mind in this redesign.”

The Admirals Club lounge at Reagan will take specific local cues to foster a strong sense of place. But the cues are subtle, so it doesn’t resemble a theme restaurant. A series of domes are patterned after the dome of the U.S. Capitol, which is visible from a window. A block of stone leading from the ground floor to the lounge on the mezzanine resembles a monument. The 236-seat lounge was also designed to offer a sense of privacy and intimacy. The club’s paneling and an overhead facade will consist of sustainable American Walnut, reflecting another desire that the focus groups would like to see more of in airline travel.

A specific sense of place will continue in airports like Austin, Denver, and Newark, as American redesigns those Admirals Clubs. In Austin, music will play a major role in the design. In Newark, the design team envisions incorporating the Brick City’s famous toughness into the vibe. “The scar tissue of a place matters,” MacEwen says. “Why can’t that be incorporated into something beautiful? We want to build to break the rules.”

Sustainable walnut is used throughout the lounge, while the carpeting has patterns of maps and cloudscapes.  Courtesy American Airlines

The new Sky Lounges and Admirals Clubs are seeing competition in other countries with clean-sheet facilities like the Bahrain International Airport’s five-star Pearl Lounge, a ten-room, 29,000-sq. foot space that is the centerpiece of the airport’s new terminal. Of course, there are even more impressive lounges, like the 100,000-sq.ft. Emirates First Class Lounge at the Dubai International Airport with a restaurant, showers and bathrooms, spa and cigar bar. Air France’s La Premiere Lounge at Charles de Gaulle Airport is a two-level feast for the eyes of lava stone, terrazzo, wood and leather by designer Jouin Manku. Each of those lounges use references to the local cultures.

Some may not incorporate as many literal design cues as the new Admirals Lounges. But MacEwen is right about customizing an airport lounge: “Every design deserves to be unique to its locale,” he says.