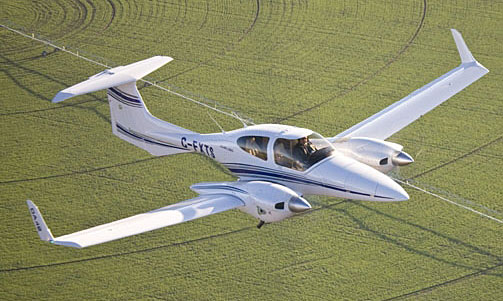 In 2009, Diamond reintroduced its attractive little four-seat twin with new engine options, to replace the Thielert diesels that proved troublesome on the original 2005 model. Buyers now can choose either the Diamond-developed Austro diesel or the traditional Lycoming O-360, which is powered by avgas. While the Lycomings are tried-and-true, the smooth and fuel-efficient Austros—modified versions of a Mercedes-Benz engine—may appeal to those who prefer to burn Jet-A, which in most of the world is easier to find than avgas. With its 44-foot wingspan, lightweight composite construction, and roomy cabin, the new DA42 is attracting lots of second looks.