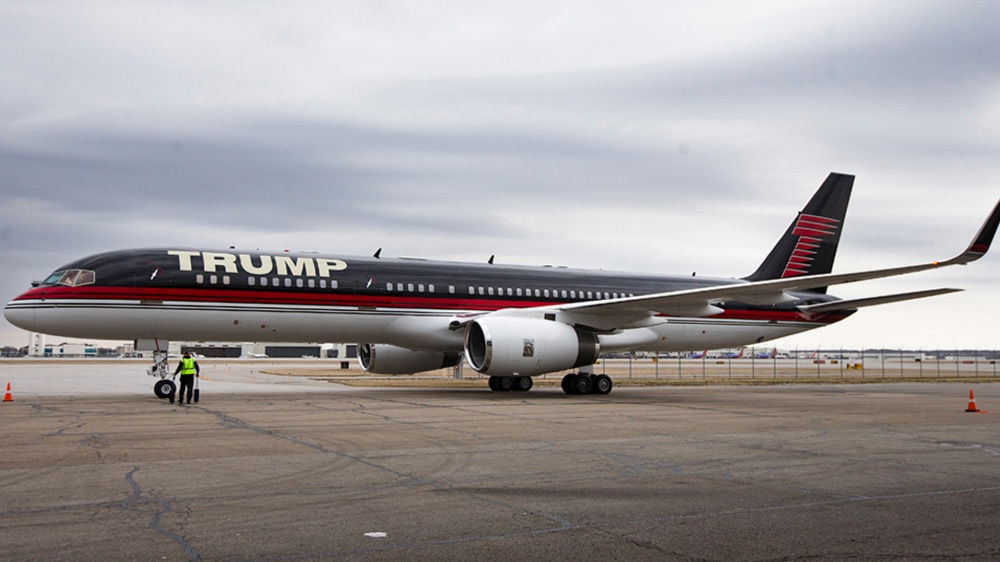 Does Air Force One trump the Trump Organization’s Boeing 757? That’s a question many private-jet aficionados are asking after the former president’s final ride aboard the presidential jet from DC to Palm Beach, Florida.

Air Force One, which can refuel in mid-air and attract a fighter-jet escort, has 4,000 square feet of interior space, with a presidential suite that features an office, toilet and conference room. With a reported value of $100 million, Trump’s personal airliner has gold seat belts, a bedroom, bathroom with gold sinks and cinema. Trump purchased it from Microsoft founder Paul Allen in 2011 and gave it a glam makeover.

The two customized Boeing 747-200B series jets—known to the rest of us as Air Force One—have a range of 6,800 nautical miles, with an onboard surgeon, medical suite and operating room for any mishaps. Air Force One can carry up to 70 guests at any point, and the two galleys can feed up to 100 people. It also has high-tech communications equipment that allows it to operate as a command center.

Air Force One is considerably larger and more high-tech than the Trump organization’s 757, but much less lavish.  Europa Press/AP Images

Trump’s 757 accommodates 43 passengers and has arange of 4,100 nautical miles. It also has a “glass” cockpit, a feature highly prized by pilots. “It’s bigger than Air Force One, which is a step down from this in every way,” Trump told Rolling Stone about his jet during the 2016 presidential campaign.

Actually, Air Force One is significantly larger at 225’2,” compared to the Trump Organization’s 757 at 153’ 11.” Also, Air Force One’s engines are in perfect order, compared to the Boeing 757, which is sitting idle at Stewart airport, 70 miles north of New York City. According to Jon Ostrower, editor of The Air Current, the plane has not flown since 2019 and needs a new engine. “I’m told that there has been a hunt for a single Rolls-Royce RB211 engine needed for one cycle, which is to say one takeoff and one landing for the 757,” tweeted Ostrower. “The tipster tells me that it wasn’t kept service ready because, well, the president ‘didn’t think he’d need it again for another four years.’”

Of course, the former president won’t exactly be grounded. The Trump Organization also owns a Cessna Citation X, a nine-seat jet that can travel at 705 mph. He also owns three Sikorsky S-76 helicopters in New York, Florida and Scotland, for members of his clubs.