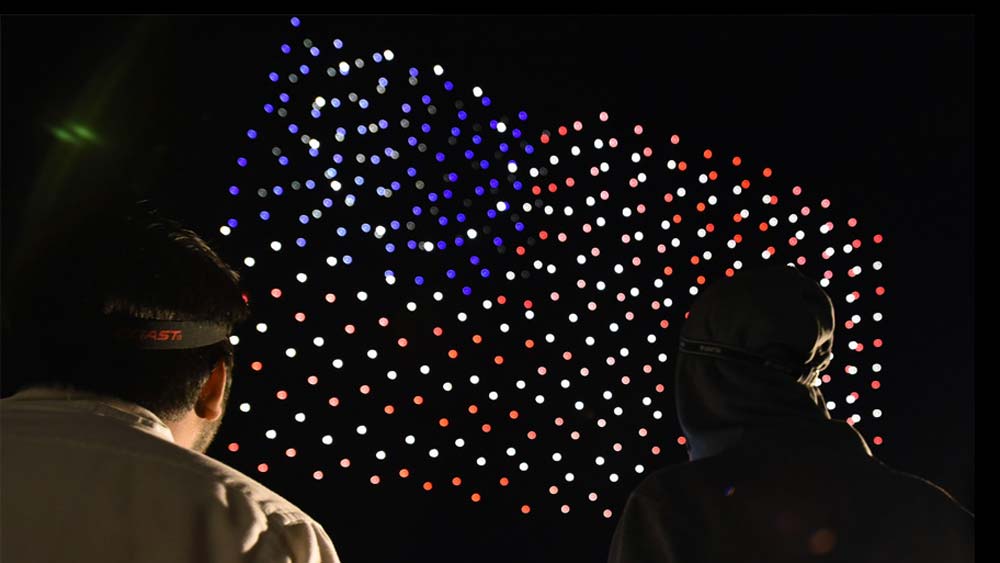 The 2017 wildfire season in California was one of the worst in the state’s history, with 9,000 individual fires burning around 1.2 million acres in total. The baddest of the bunch, the Thomas Fire, burned upwards of 281,000 acres alone, and our friends in the California wine country had devastating fires of their own to deal with.

A year later, conditions in California are once again ripe for another round of conflagrations. It’s with this in mind that some concerned people are eschewing the traditional Independence Day fireworks displays—and their chances for fiery mishaps—in favor of a tech-driven spectacle in the night sky.

For many people, the 2018 Winter Olympic Games in Pyeongchang, South Korea, was the first time they had seen a large-scale light show of coordinated drone flying. During the opening ceremonies, a massive swarm of drones rearranged itself to create a figure of a snowboarder, a flying dove, and the Olympic rings. The show was the largest of its kind and backed by Intel, which used more than 1,200 of its Shooting Star light-display drones to create the spectacle. The company also designed a smaller-scale show using the same drones for Lady Gaga’s Super Bowl halftime performance in 2017.

This year, Intel is getting in on the Independence Day spirit by holding a 500-drone display at Travis Airforce base in Northern California. But don’t feel left out. While your 4th of July drone display likely won’t be quite so grandiose, there are a number of companies across the country (Firefly Drone Shows, Great Lakes Drone Company, and Wildly Creative Marketing, just to name a few) that are starting to offer drone light shows as an alternative to fireworks in blaze-prone areas. An added benefit (or perhaps drawback for traditionalists) is that masses of drones only create a cicada-like buzzing rather than the massive booms that can frighten and confuse pets, often prompting escape attempts.

The price of drone shows is still high as the technology is still new, but unlike fireworks, drones can be reused for multiple nights of shows, spreading out the cost. Of course, prices vary depending on the number of drones being used, but a show with 100 drones can cost upwards of $80,000—more expensive than fireworks, but safer and just as spectacular.