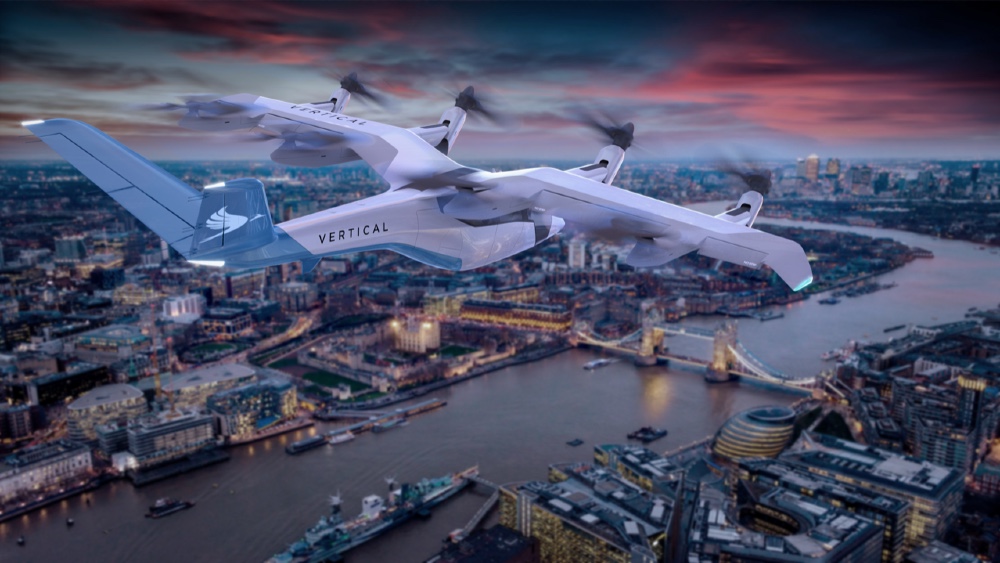 Vertical Aerospace expects its VA-X1 eVTOL to be flying commercially by 2024. The UK aerospace company released the plans yesterday, saying it will move directly towards a full-scale prototype of the five-seat aircraft, rather than smaller models. The company said it will be the first certified, winged, electric vertical takeoff and landing aircraft.

“With the launch of the VA-X1, we’re proud to be taking eVTOL one step closer to mass-market adoption, and supporting the next era of aviation,” said CEO Michael Cervenka. “We believe that people should be able to quickly and affordably get from A to B without sacrificing the planet—with the VA-X1, this vision will start to be realized in under five years.”

Vertical Aerospace was founded in 2016 by Stephen Fitzpatrick, who is attempting to promote sustainability in transportation.

The interior has seats for four passengers and a pilots, with a payload of about 900 lbs. The designers prioritized easy access to the aircraft.  Vertical Aerospace

The VA-X1 is different than “multicopters” with multiple propellers on a body that rotate as it flies or ascends or descends vertically. The VA-X1has fixed wings and a tail, and is capable of cruise speeds of 150 mph, with a range of more than 100 miles, compared to the multicopters which generally have much slower speeds and ranges. “Multicopters are not efficient for longer flights which is where we see the benefit of being in this market,” a Vertical Aerospace rep told Robb Report.

The company will build the new aircraft, which carries a payload of 900 pounds, or the equivalent of four passengers, a pilot and their luggage, in the UK. It acquired a Formula One design firm last year to expedite composite design and production, and is partnering with Honeywell to provide the vehicle management system for its prototype.

The VA-X1 will be 30 times quieter than a conventional helicopter, according to the company. It has a 49-foot wingspan and 42-foot length, so it can take off and land from existing helipads. The company says it is only one of seven companies worldwide to have successfully flown multiple full-scale eVTOL aircraft.

The fixed-wing airframe and tail give it a faster speed and longer range than most multi-copters eVTOL designs.  Vertical Aerospace

Vertical Aerospace’s previous model, the Seraph, had 12 propellers in a multi-rotor design. Its maximum payload was smaller at 550 pounds, and it could only attain speeds of about 50 mph. The VA-X1 is a much more efficient design. The company says its new eVTOL will fly from London to Brighton in 30 minutes, compared to two hours by car and an hour by train.