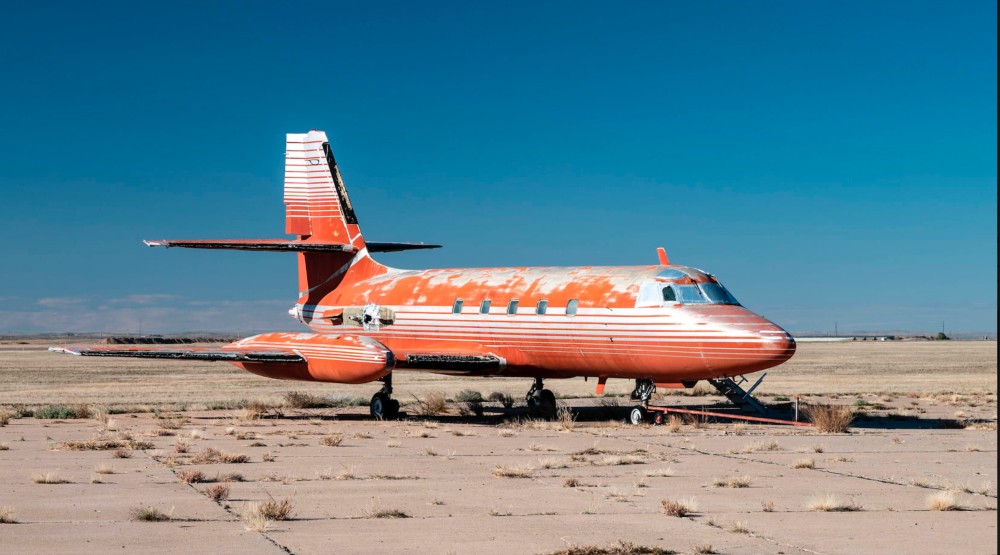 A piece of rock ‘n’ roll history, waiting to be dusted off in the New Mexico desert, could be yours next month. Elvis Presley’s 1962 Lockheed 1329 JetStar is going up for auction in early January. Presley bought the red-and-silver-liveried JetStar—then considered the jet of choice for celebrities and CEOs—in 1976 for $840,000, or about $4.4 million in today’s dollars.

The jet, with room for nine passengers and three crew, had four engines mounted in two pods at the rear of the fuselage. It had a max speed of 565 mph with a range of about 2,500 miles. Besides the King, the jet would’ve been an airborne home to Col. Tom Parker, the TCB band and other backup groups as well as Presley’s friends, known as the “Memphis Mafia.”

The interior has wood paneling, but is mostly red-velvet upholstery with gold-finish hardware and red carpet. The seating includes six plush swiveling chairs and a couch. The media cabinet has a television, audio-cassette player and an RCA VCR player. The galley consists of a Kenmore microwave and beverage dispenser.

The Lockheed was just one aircraft in Presley’s private fleet. He owned a custom Convair 880 named the “Lisa Marie,” which went by the call sign of Hound Dog 1, along with a second JetStar identified by its call sign, Hound Dog 2. Several pilots remained on retainer to be able to fly at a moment’s notice. Two Elvis jets are currently on display at Presley’s home, Graceland, in Memphis.

Lockheed introduced the JetStar in 1957, the same year Elvis released “Jailhouse Rock,” and eventually built 203 aircraft at its facility in Marietta, Georgia. Elvis sold the jet after owning it for just over year and it ended up with a Saudi Arabian company. It was eventually moved to the Roswell International Air Center in Roswell, New Mexico, where it has been stored for decades.

Unfortunately, it won’t be a matter of just turning on the engines and flying out. The engines and most of the cockpit equipment were removed. Mecum’s Kissimmee auction listing says the JetStar will require disassembly in order to be shipped. The company has high hopes someone will restore it as a “unique Elvis exhibit for the world to enjoy.” A previous auction last August failed to find a buyer for the jet, which had a minimum starting bid of $100,000.

More images of the King’s JetStar.