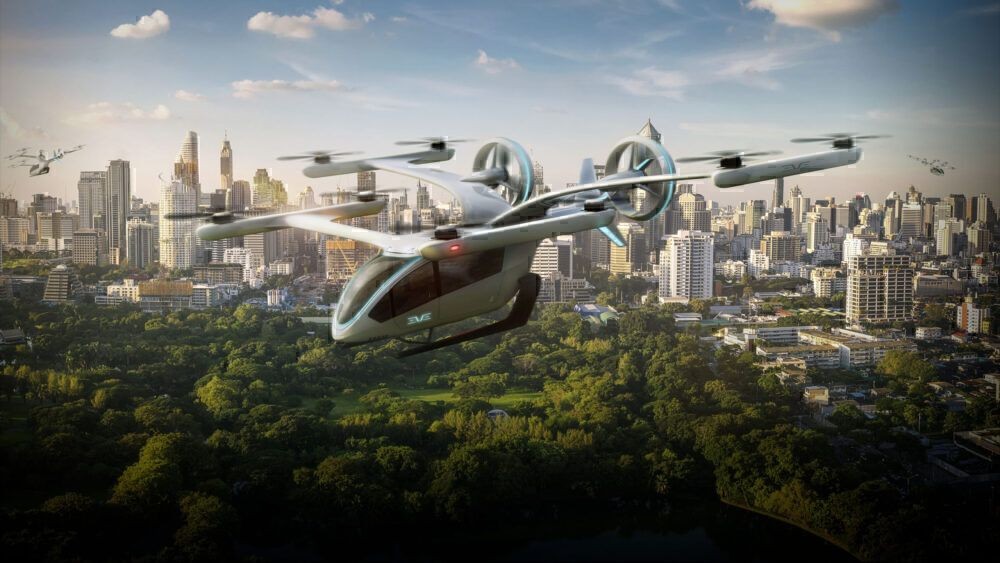 Embraer, working with its Eve subsidiary, held a series of flight tests over Rio de Janeiro to collect data for its electric vertical and landing takeoff aircraft. Eve also announced that it has been spun off and will begin trading today on the New York Stock Exchange.

The seven-day tests were not on one of the company’s eVTOL models, but aerial-data collection using regular piloted helicopters that are part of the Embraer Autonomous Systems project, or project EASy. The Brazilian aircraft manufacturer is working on autonomous flight for the future.

The companies tested for normal and edge-case scenarios in take-off, climb, cruise, approach and landing. The helicopters had professional pilots while the onboard systems captured data that would be used in future eVTOL aircraft. Embraer and Eve have been testing sub-scale models for about 20 months to validate the design.

The testing was done from a helicopter but gives Eve data about takeoff and landing for future eVTOL aircraft.  Courtesy Eve

Julio Bolzani, head of Embraer’s autonomous systems, said that the company won’t be going to full autonomy with its Eve prototypes. “Pilots will be on board [the first aircraft] and will also benefit from the application of these technologies through a safer and simplified vehicle operation until we reach a fully certified autonomous flight system for Urban Air Mobility,” he said.

Eve also announced that it would begin trading today on the New York Stock Exchange under the symbols EVEX and EVEXW. The company completed its merger with Zanite Acquisition Corp., which traded in the Nasdaq market, and changed its name to Eve Holding, Inc. The merger with Zanite was expected to raise $510 million for the company.

Andre Stein, co-CEO of Eve, said the transaction will give the startup “growth capital.” It also “positions Eve well to execute its development plans, aided by our ongoing strategic partnership with Embraer. Eve is one of multiple eVTOL firms that have partnered with institutional partners to become special acquisition corporations that are now traded publicly. Joby Aviation, Wisk Aerospace, Archer Aviation, Vertical Aerospace, Blade Air Mobility and Lilium are all listed on different exchanges.

Eve expects its first eVTOL aircraft to be certified in late 2025 and on the market in 2026. This rendering shows it over New York City.  Courtesy Eve

When it comes to conventional aircraft manufacturers jumping into the eVTOL segment, Embraer is on its own. It expects to have its first eVTOL certified in 2025, with commercial deliveries starting a year later. The aircraft will have a cruise speed of 125 mph and range of 50 miles. The company says it has conditional orders for about 1,700 aircraft valued at $5 billion.

Textron Aviation, owner of the Bell and Cessna brands, announced in March that it intends to purchase Pipistrel, the first electric aircraft manufacturer to receive EASA certification from the EU’s civil aviation authority. The company said that Pipistrel would be the first member of its new eAviation business segment.