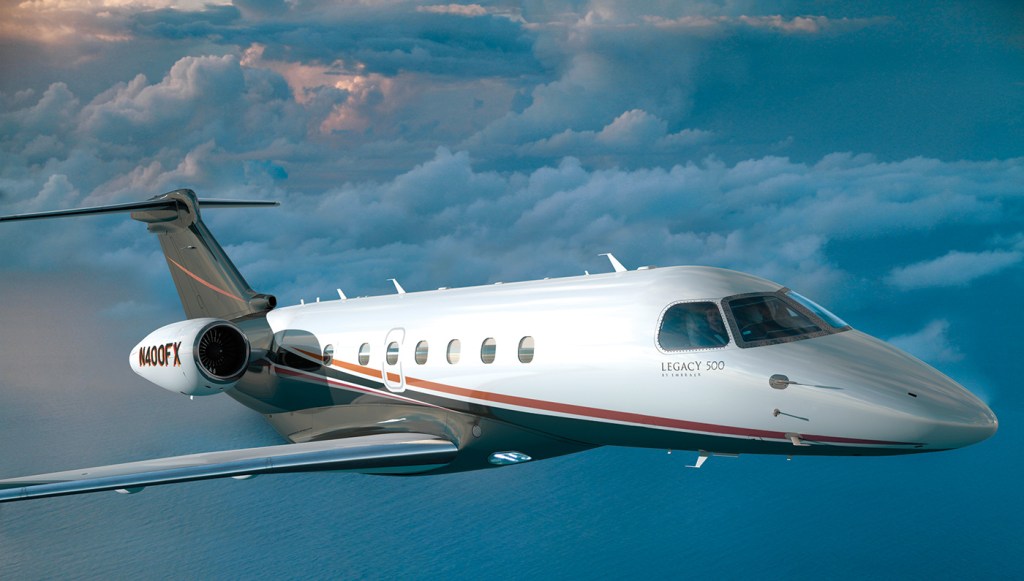 If there is such a thing as an ordinary jet delivery, this certainly was not it. In April, employees of Embraer Executive Jets (embraerexecutivejets.com)—Embraer’s business-jet division—gathered in a hangar at the group’s headquarters in Melbourne, Fla., for the delivery of the company’s 1,000th business jet. Executives, sales staff, interior designers, and line workers from the adjacent factory crowded the back of the hangar and filled the chairs that had been set out in rows in front of a stage. They listened to a celebratory speech by CEO Marco Tullio, who said the moment was “like a dream.” Then, as the music swelled and the lights came up, the curtains to the side of the stage parted, revealing a buffed and gleaming Legacy 500. The employees cheered; afterward, they drank from Champagne flutes emblazoned with a 1,000th-delivery logo and toured the aircraft, posing for pictures with it.

The $20 million Legacy 500 is an impressive aircraft, with a range of 3,600 miles and a top speed of 537 mph. It’s the first midsize executive jet with fly-by-wire controls, and its spacious cabin has a flat floor and more than 6 feet of headroom—both of which are unusual for a jet this size. The aircraft went into service in 2014 and was the company’s fourth clean-sheet design in less than a decade. Embraer, which was established in 1969 in Brazil, didn’t begin delivering business jets until 2002; thanks in part to the Legacy 500, it reached the 1,000-delivery mark in just 14 years.

The company entered the business-jet market with the Legacy 600 (then called the Legacy Executive), a redesigned version of the ERJ135 regional airliner that it introduced in 2000 at the Farnborough International Airshow. Embraer’s venture was soon bolstered by Flight Options (flightoptions.com), which took delivery of several Legacy 600s in 2003 and added them to its fractional fleet.

At the 1,000th-delivery ceremony in Florida, Flexjet CEO Michael Silvestro commented on the fast emergence of Embraer as a major player in the business-jet field. He noted how it has gone from having a zero market share in 2002 to a 17 percent share in 2016. Said Silvestro, “They did the right thing every step of the way.”

2000: Embraer introduces the Legacy 600 (then called the Legacy Executive), its first business jet; deliveries begin in 2002.

2013: The Phenom 300 becomes the world’s most delivered business jet for the first of three consecutive years—and counting.