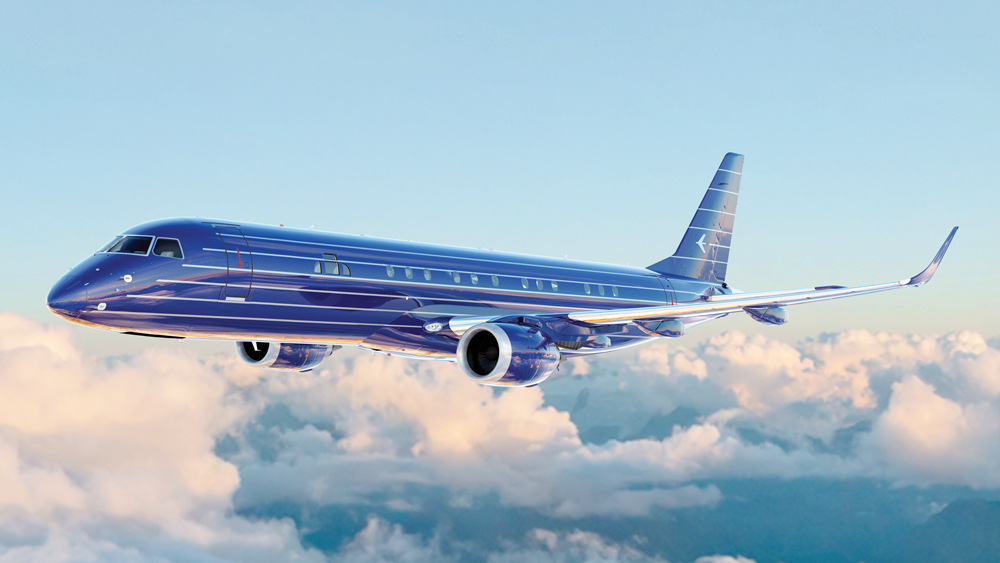 What if the interior of a private jet could tell a story? What if it could transport you to another era? These were the questions brought to experiential designer Eddie Sotto by Jay Beever, vice president of interior design for Embraer Executive Jets, the Brazilian aircraft maker’s Florida-based business-jet division. Specifically, Beever wanted Sotto to reimagine the interior of the Lineage 1000E—the largest aircraft in the Embraer Executive Jets fleet—with an Art Deco motif. He also wanted to demonstrate how far Embraer’s engineers could push the design of a private-jet interior. He presented Sotto with the idea and turned him loose. The result is the Manhattan Airship, a design concept with a starting price of about $80 million.

With a cabin that’s 84 feet long and 6 feet 7 inches tall, the Lineage is a good choice for an over-the-top design. In a typical configuration, the aircraft has five passenger zones, which can include a master bedroom with a queen-size bed and shower. Beever wanted Sotto to create an interior with so many interesting details and cultural references that passengers would be reluctant to leave the cabin when they arrived at their destination. “This won’t feel like a charter trip,” he says. “I want it to feel more like a cocktail lounge with an intimate dining area.” The Manhattan Airship has both.

“The future of luxury for us is to give people an experience that surprises them, something they aren’t expecting,” Beever continues. “We want to move away from casual and bring back a reason for people to get dressed up to get on the plane.”

Sotto, the founder and president of SottoStudios/LA, was the senior vice president of concept design for Walt Disney Imagineering, the division that designs and creates the company’s theme parks. “I come out of a culture in which you give me the vision and I’ll nail it,” he says.

Beever and Sotto had already worked together on Skyacht One, a nautical-themed interior concept for the Lineage that was a highlight of the 2013 Robb Report Ultimate Gift Guide.

The Manhattan Airship also has nautical references. Sotto is a longtime admirer of the Normandie, the French ocean liner that entered service in 1935. It was known for its lavish first-class spaces done in Art Deco, the prevailing style of the day. Many of the spaces featured grand entranceways and large wall murals. Its dining room seated 700 and was lit by pillars of Lalique crystal. Sotto had also toured the Queen Mary, another ocean liner of that period with similar design elements. “I made playlists of the music of the era to teleport myself into the time while I was sketching,” he says.

The sketches bounced back and forth between Beever and Sotto for about a month before Beever had the interior he wanted.

Sotto’s design calls for portions of the cabin to be outfitted in dark wood flooring and paneling and feature gold- and brass-colored accents. On the wall of the cabin’s entryway is a metallic mural depicting the Manhattan skyline circa 1930. It’s reminiscent of a mural in the lobby of the Empire State Building that depicts the building itself. It also calls to mind a mural in the Queen Mary that showed the progress of the liner as it crossed the Atlantic. On the left-hand side of the mural is a stylized Manhattan skyline.

The entryway leads to the Cloud Club, a lounge area inspired by the rooftop club inside the spire of Manhattan’s Chrysler Building. It includes a bar with retractable bar stools, vintage-inspired sconces, and a mohair-and-lambskin divan under a city-loft-style window. Beever wanted to showcase Embraer’s ability to install oversize windows, and so the Cloud Club’s window is among the largest in the aviation industry. It’s rimmed with accent lighting and surrounded by metallic panels with leaf designs.

Adjacent to the Cloud Club is a cinema room with simulated alabaster torchères, surround-sound audio, and a 4K video screen. The next space, the cabin’s largest, is the Salon Dumont. It’s named for the aviation pioneer Albert Santos-Dumont, a national hero in his native Brazil, where he is widely considered the father of aviation.

Beyond the salon is the Crystal Room, where six passengers can dine at a table with decorative inlays. The table, the mohair-covered seats, and the light fixtures, which appear to be crystal, are nods to the Normandie’s dining room.

The Cloud Club’s window is among the largest in the aviation industry.  Photo: Courtesy Embraer

Sotto notes that all the fabrics, materials, and elements of his design are FAA approved—including the mohair. Few aircraft interior designers use it, but it seemed the best choice for the Manhattan Airship because it was a staple fabric of the era his design references. “It’s easy to put in expensive finishes, but that’s just ornament for ornament’s sake,” he says. “We don’t want to do that. We want to give people a sense of story.”

Many of the design details can indeed prompt stories. For instance, if a passenger notes the Eiffel Tower rendering in the Salon Dumont, the aircraft’s owner can describe how Dumont gained fame in 1901 for making a hot-air-balloon flight around the tower. Each light fixture or inlay begs a passenger to ask which iconic building or ship inspired it.

Even the exterior design scheme is steeped in history. The stripes are intended to evoke the S1 Locomotive designed by Raymond Loewy, a pioneer of streamline moderne. The style emerged from Art Deco and became ubiquitous during the 1930s through 1950s, appearing in everything from architecture to home appliances.

Yet Sotto and Beever didn’t have unlimited license to re-create all the period design elements. You can’t, for example, install crystal lighting fixtures on an aircraft. The FAA would disapprove, and the glass would weigh down the jet. “We had to use a polycarbonate,” says Sotto. “But some things are better to simulate.”