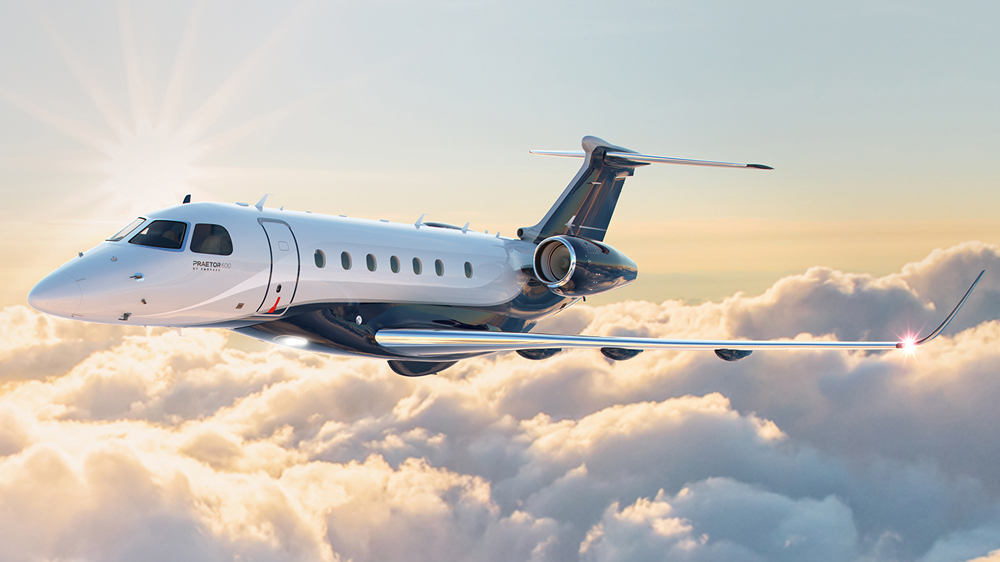 Like a scene-stealing costar, Embraer has captured the spotlight ahead of the National Business Aviation Association’s (NBAA) Business Aviation Convention and Exhibition, the industry’s biggest U.S. event of the year, being held in Orlando from October 16 to 18. At an event at the Orlando Executive Airport—where a number of companies will be displaying their static aircraft during the show—the Brazilian aircraft manufacturer introduced its new Praetor 500 midsize and Praetor 600 super-midsize business jets.

The Praetor 500 and Praetor 600 are not completely new, clean-sheet designs but rather based on the Embraer’s Legacy 450 (which recently set a speed record) and 500 jets, respectively. However, the big advantage of both new models are increased ranges, with the Praetor 500 able to travel up to 3,740 miles without stopping, compared to the 3,341 of its predecessor, and the Praetor 600 able to reach up to 4,488 miles, a big jump from the 3,596 miles of its predecessor. This increase gives the Praetor 600 intercontinental range, while the Praetor 500 gets the claim to fame of being the fastest midsize aircraft capable of reaching Europe from the West Coast in a single shot. The new jets will be equipped with fuel-efficient Honeywell HTF7500E turbofan engines, which won’t just help save the planet but also a pretty penny on petrol—a good compromise before all-electric planes eventually conquer the skies.

Both planes feature the modern amenities jet buyers are coming to expect, like Honeywell Ovation cabin management devices as well as GoGo and Ka-band for high-speed Internet access, giving passengers access to the entire Internet’s worth of entertainment content—though there will still be an optional in-flight entertainment system with screens, surround sound, and various input options. Both aircraft will also have six-foot tall, flat-floor cabins and four club seats that can all lie flat to form two berths. A refreshments area up front, in-flight accessible baggage, and a rear lavatory are about the only other details that Embraer has shared about the two jets at this point.

Of course, rather than a clean-sheet design, perhaps you’re interested in acquiring one of a handful of collectible aircraft that made a splash in film, TV, and real-life adventures.