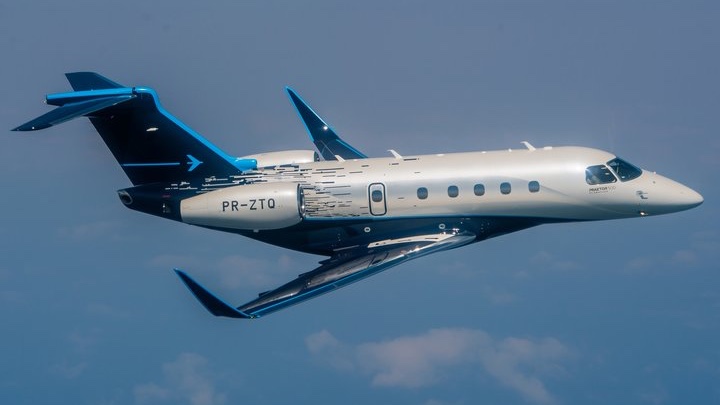 When jet manufacturer Embraer introduced its midsized Praetor 500 in 2018, it was the successor to the company’s successful Legacy 450 platform. The 500 retained its predecessor’s flat floor and six-foot headroom, along with the aircraft’s ability to maintain 5,800-ft. cabin altitude pressure to minimize passenger fatigue. At the same time, the 500 added significant fuel capacity and range.

“The range increases from 2,900 nautical miles to 3,340 with four passengers,” Johann Bordais, president and CEO of Embraer Service & Support, told Robb Report. “That gives it true nonstop, corner-to-corner flights, such as Miami to Seattle and Los Angeles to New York.” Its payload also grew from 800 pounds to 1,600 at full fuel.

The company recently completed its first conversion of a Legacy 450 into a Praetor 500 at its service center at Bradley International Airport. The conversion took about a month, involving multiple “technical tasks,” while also stretching the wingspan from 63 to 71 feet and reinforcing the wing ribs for added strength.

When the Brazilian jet manufacturer launched the Praetor 500, it designed a method to convert last-generation Legacy 450s into the new model. The month-long process can be undertaken at three of its centers.  Embraer

The change also required the builder to replace or move elements to the fuel-measurement system and fueling ports and update the flight control systems, including a new avionics load for the flight deck. The Praetor 500 also features the E2VS, a head-up display that combines synthetic and enhanced vision, full fly-by-wire controls and turbulence reduction, making it “the only midsize business jet with full fly-by-wire technology and active turbulence reduction,” says Bordais.

To complete the makeover, Embraer added the Praetor’s swept winglets and replaced all the placards, and logos on an interior that already has stone flooring, a wet galley, and a vacuum lavatory.

“We are targeting a conversion time of under 30 days,” says Bordais. “The first conversion was performed at Bradley, but our service centers in Fort Lauderdale, Paris and Sorocaba, Brazil, can perform this conversion as well.”

The conversion process works with any Legacy 450, though whether it’s worth the cost will depend on each owner’s needs. “It’s a cost-effective solution for Legacy 450 customers with fitting mission requirements,” says Bordais. “The airplane will now go farther and carry more payload. Pilots also benefit from more margin for planning due to extra range. This conversion makes a great airplane even more industry leading.”