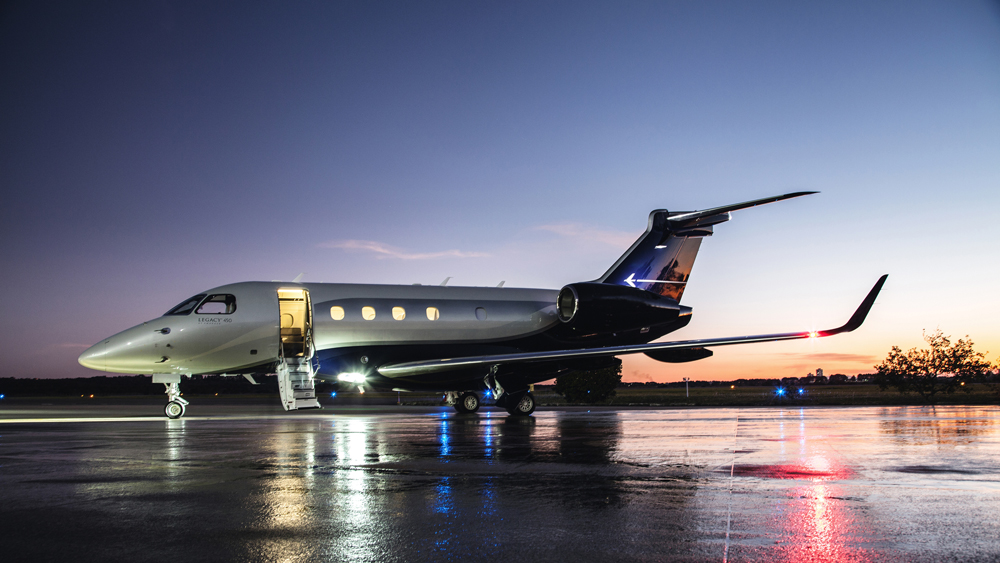 Fresh from its exhibition at the European Business Aviation Convention & Exhibition (EBACE) aviation show, the Embraer Legacy 450 has completed a record-setting speed run across the Atlantic Ocean. It also so happens that the rapid ride occurred in a demonstrator plane equipped with the new interior features the Brazilian aircraft-maker unveiled at the show.

Departing from Portland, Maine, at 9:25 am, the Legacy 450 set off with two pilots and two passengers onboard, though the midsize jet can carry as many as nine passengers. Six hours and five minutes later—at 8:30 pm local time—the plane landed at Farnborough Airport in the UK. The total length of the flight was 3,172 miles, well short of its 3,341-mile maximum range, and the plane landed with the required NBAA IFR fuel reserves onboard. It flew at an average speed of 522 mph—not quite as fast as this recent pair of record-breaking Gulfstreams. While the National Aeronautic Association (NAA) has already confirmed the flight as a U.S. record, it is currently being reviewed by the international governing body—the Federation Aeronautique Internationale—to be declared a world record.

Luckily for the pair of passengers onboard, the record-setting aircraft was equipped with the recent upgrades Embraer has introduced for the Legacy 450, including new seating with improved ergonomics and a wider variety of decorative options like color, texture, and stitching. The jet also now uses a new air-to-ground connectivity system that gives passengers access to higher speed onboard Internet access. One of the most important improvements aboard the upgraded jets is also one of its least immediately apparent—but one that passengers are sure to notice after a long flight. The Legacy 450’s maximum cabin altitude—previously 6,000 feet—has been lowered to 5,800 feet, improving flier comfort.

Upgrades aside, owners of new Legacy 450s will still be treated to four berths, a sophisticated in-flight entertainment system, and a six-foot-tall, flat-floor cabin. As they say, everything old is new again.