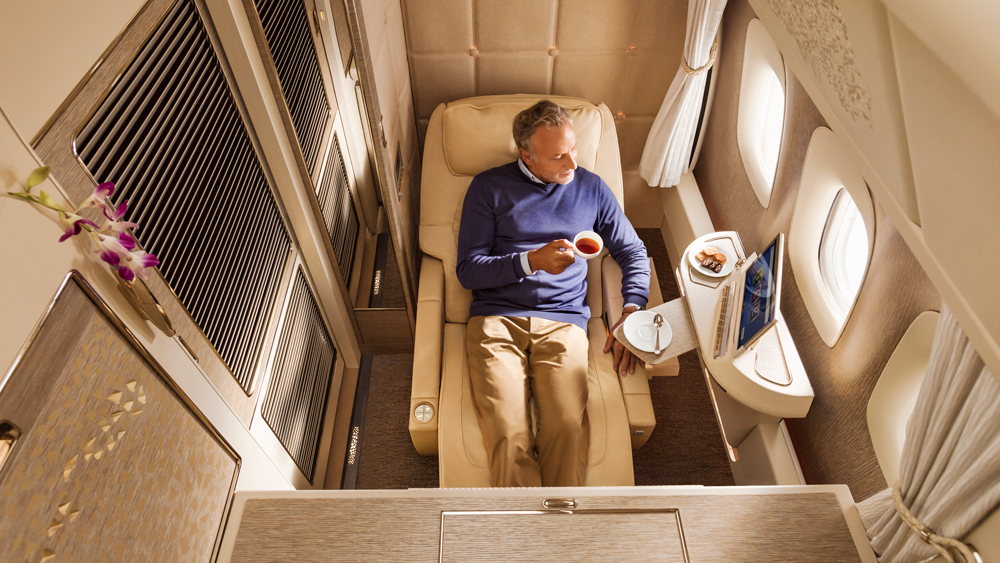 Emirates is embracing a radical new window concept—not having any.

Whether or not you’re a window- or aisle-seat loyalist, small glimpses of clouds, a sunset, or just an expansive sky can be reassuring when you’re crammed into an enclosed space with up to 615 people (the capacity for Emirates’ A380 long-haul flights). It’s a small but crucial comfort for the claustrophobic. Even if you’re flying first class with maximum space, let’s face it, you’re still encircled in some way. So why would you ever book a seat on a plane with no windows? The idea is to replace them with monitors so that you still have the effect of a window, with fake but enhanced views.

Passengers in first class will be offered projected views of the world passing by via a real-time fiber-optic camera, according to Forbes. Emirates Airlines president Tim Clark claims the images are so good they will be better than what you can see with the natural eye.

But what if there’s turbulence or lightning and you have to sit there while pretty images scroll past your “window”? Or if there’s an emergency, flight attendants will not be able to judge for themselves whether or not it’s safe to evacuate. As a result, experts say it’s going to be a while before Emirates’ plan gets through regulatory testing.

That may seem like a lot of trouble for something that’s not really that appealing in the first place. So, why do it at all?  The truth is that the idea is not so much for the benefit of the passengers as it is for the airline, according to CBS. Windowless airplanes are reportedly lighter and faster but, more importantly, they cut costs on fuel and are cheaper to build.

Passengers, however, will ultimately reap the rewards of the windowless plane, which will offer wider seating and enhanced (but unspecified) high-tech entertainment. First-class cabins will also be upgraded with floor-to-ceiling sliding doors for complete privacy. Worth it? You’ll have to be brave enough to book a seat to find out.